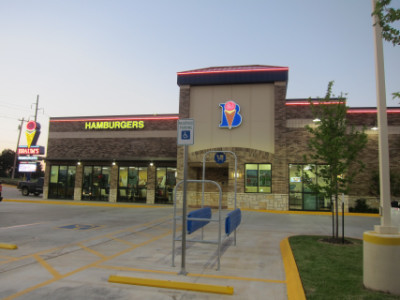 Many people who live in the area where there is a Braum’s remember the television commercials featuring Ernest, a character who was not entirely aware of his surroundings or how he should act towards other people, but who had enough savvy to recognize the excellent ice cream that was served. I do not think many people needed to be reminded that a Braum’s store was located in just about every town and neighborhood throughout Oklahoma and surrounding areas, but even those who did not have ice cream on their shopping list might remember how much they enjoyed some of the other items sold in the store or served from the grills found at each location.

Based in Tuttle, Oklahoma, Braum’s is probably as well known for its hamburgers as its dairy products. The milk, eggs, and other dairy products are produced on its farm, and the beef used in the hamburgers comes from the farm as well. Some items sold do not have the Braum’s label, but most are produced by the company and sold exclusively in its stores.

The company has built other stores in about a 300 mile radius from central Oklahoma, ensuring that everything sold has the same standard of freshness and quality. I have purchased items in several Braum’s locations in western Oklahoma and Texas, and I believe that there is really no difference in the stores regardless of where they are located.

With such a wide variety of items produced, there will of course be both hits and misses. I think some of the best items in the store are the ice cream, milk, butter, bread, and pimiento cheese spread. The misses involve some of the ice cream flavors, some types of bread, and definitely some of the grilled items from the restaurant. My tastes will of course not reflect those of all readers, but I will provide my experiences with the items I have tried.

The Restaurant
The location at Rockwell and Hefner in northwest Oklahoma City was recently rebuilt, with the new store and restaurant opening in 2017. The old one had been there at least since the 1980’s and was probably in need of upgrading (the major problem I saw was that it was too small to stock some of the items I found at other Braum’s locations). 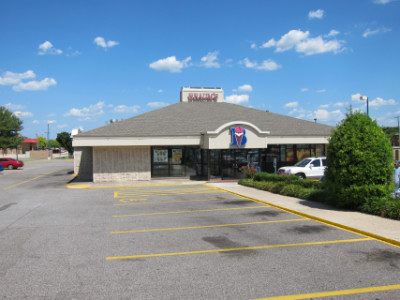 The old Braum’s before it was remodeled

While the consistency maintained by Braum’s is definitely a good factor for the stores, it may or may not be a positive where the restaurant is concerned. I remember when Braum’s hamburgers were among my favorites in Oklahoma, but some changes they made a few years ago have affected them to the point that even some die hard fans in my family are not ordering them any more, and it is the same at every Braum’s location. The upgrades they have made in the stores, however, have helped ensure that we can find any item we want at any location that we visit. 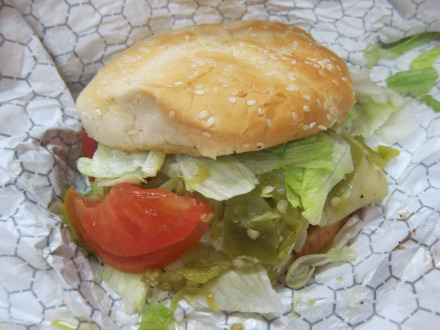 Knowing that all stores serve the same food, though, I can say that the best item I have found is the Grilled Chicken. From time to time they have offered it with green chile, which makes it even better, but I do think the chicken sandwich is fairly good in itself. The Chicken Club Sandwich is a good choice when the green chile is not available. 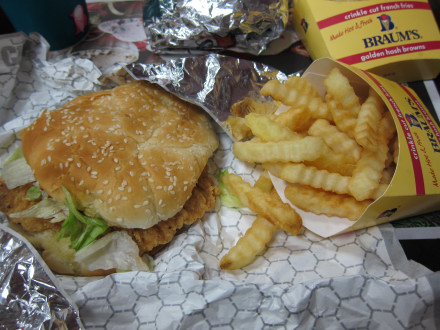 The French Fries are fairly good, and I do not think there is anything that especially distinguishes them as being especially good or bad. 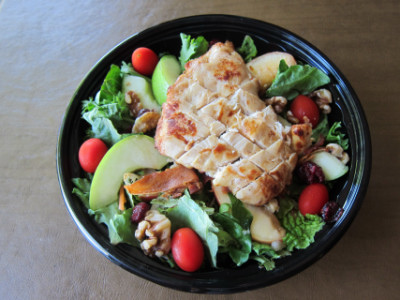 I took a picture of the Apple Cranberry Walnut Chicken Salad. The person who ordered it did not think it was especially good, but I cannot say from personal experience.

Drinks
I used to be a big fan of the Limeade made at the fountain, but the ones lately have seemed to be lacking the flavor they should have. 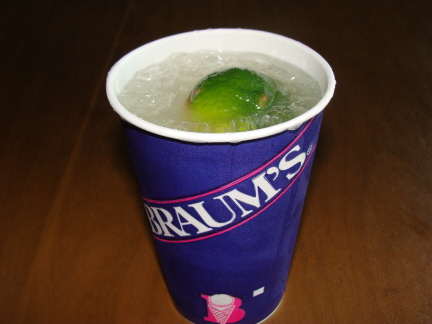 What I would recommend in terms of flavor is the Milk Shake, although I have found better ones at other restaurants (such as Johnnie’s). 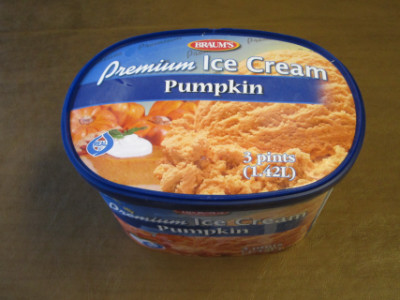 There are two ways to get ice cream at Braum’s. Cartons are available in the store to take home, or you can order individual scoops from the counter. The majority of flavors are rotated either seasonally (such as the pumpkin) or at a seemingly random schedule throughout the year. The most popular flavors (vanilla, chocolate, lime sherbet, etc.) are available all the time. I have quite a few favorite flavors, but when ordering individual scoops I like to get the combination of chocolate and orange sherbet. 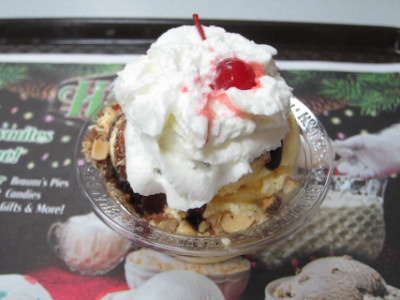 Some fancier ice cream desserts are available from the counter, such as sundaes and the banana split. The Hot Fudge Sundae is a customer favorite that I also think is very good. 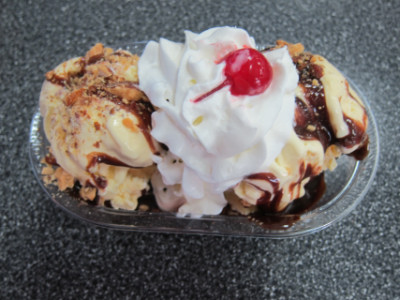 The Brownie Fudge Sundae, though, is one my personal favorites. The brownie on the bottom makes it taste somewhat like an ice cream cake, except the chocolate flavor makes it better than most. 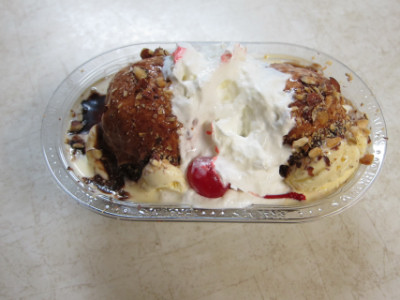 The Molten Lava Cake is a “double dip” sundae, like the brownie fudge sundae (with two scoops of ice cream), and is another one of my favorites. This one is good because it has actual cake in it (the molten lava) that makes it extra good and extra filling. Half orders are available for all sundaes, and this is one where a half order gives me just about all the dessert satisfaction I need. 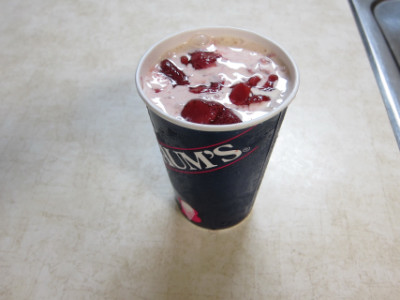 The Mix is prepared somewhat like a milk shake, except that it is meant to be eaten as a dessert. You can get a choice of drinks (such as ice cream or yogurt in various flavors) with various ingredients added (anything from strawberry to Oreo cookies). I like these best either when freshly served or when they are just barely thawing out after being stored in the freezer at home (in other words, cold to partially frozen).

The Store
While the sundaes are treats that I am able to enjoy occasionally, items from the store are part of my regular menu, at least while I am within 300 miles of Braum’s farm in Tuttle, Oklahoma. Although I am not sure if Braum’s makes their own bread, the Braum’s stores are the only place I can buy it. My favorite is Braum’s Raisin Bread, which is usually part of my breakfast. I think the flavor is excellent, with a generous amount of walnuts and just a touch of cinnamon. I will note, though, that the bread is sweetened with corn oil and it contains a number of other additives that I think I would prefer to keep to a minimum. I am finding several other raisin breads that I also like and seem to be healthier, but for flavor the one at Braum’s is really my favorite. 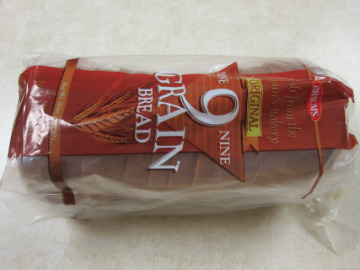 I do not have quite as much of a glowing review of the Nine Grain Bread, but it is equally a part of my grocery shopping since I find it to be a good bread for most sandwiches. I do find better bread in stores such as Sprouts, but these tend to have a short shelf life while the nine grain from Braum’s lasts long enough that I can usually use most of the loaf.

For a while Braum’s discontinued the nine grain bread along with a couple of others and introduced some new breads to replace them. I never became a fan of the new breads (which they call Artisan Bread), and after a while they started selling the old ones again (and continue to do so). 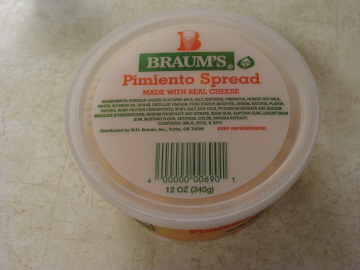 Price’s pimiento spread is very popular in El Paso and became a favorite of mine, but when I am in Braum’s territory I prefer to get their version (one that I think has a better flavor and more “kick” to it from the pimientos). 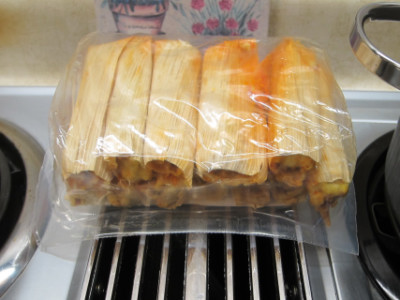 The frozen Tamales sold by Braum’s are ones that I would probably describe as average, although I did think the red chile used for flavoring was pretty good. The masa was not soggy and had a good texture. The chile was about 3 out of 5 on my “chile scale.”

Because Braum’s has its own farm this gives me extra confidence to buy their milk, butter, and eggs. I cannot say the flavor is really any better than anyone else’s but I do think it is better to get dairy products (and meat) that does not come out of the standard factory farm and feedlot system.

Braum’s uses its own beef for the hamburgers it serves, but they explained that the beef sold in their market comes from other producers (but they have the same standards Braum’s uses on its farm).

Additional Comments
Although I find ways to live without Braum’s when I am not in Oklahoma, it is certainly something I like to have when I can. Braum’s sells both its own products and ones from other companies in its stores, but Braum’s name brands are the ones that I go out of my way to get. With some items, such as the ice cream, it is just that it is good, convenient, and comes in such a wide variety of flavors that it never gets boring. Most items are well priced, and they have frequent sales on the ice cream.

I do have some issues with the Braum’s company (in contrast to its products). For instance, when the Rockwell store was being remodeled the surrounding stores were frequently out of my favorite items (such as the raisin bread). I think the company failed to account for the fact that the customers from the Rockwell store would be shopping at the other stores, and they did not keep a large enough inventory of items. I certainly questioned the decision to discontinue the nine grain bread (it was brought back by popular demand).

The Braum’s fountain desserts (such as the brownie fudge sundae) are some of the best desserts I have found in the OKC area.

On a recent trip to Louisiana I found that they were planning to open a new store in Longview, Texas (I think near the edge of their 300-mile radius for their service area), and it is good to know that there are now more stores than in the past. I also like that the stores are now larger and have room for more flavors of ice cream, etc.

I also must make a plug for the Braum’s at 13925 N. MacArthur Blvd. They are the ones who introduced me to the brownie fudge sundae, which opened up my recent cravings for the sundaes (previously I had been focused on getting double scoops of ice cream). I know that every restaurant has a menu board available to see what they have, but the staff at the ice cream counter on MacArthur has taken the extra time to explain to me what they have and what they personally like, which has now been translated to the items that I like. The store on MacArthur also has especially good customer service, such as opening up a second checkout line if the first one gets too busy. The Rockwell store is smaller and is not able to do some of the things they do on MacArthur (such as opening up a second checkout line). I do not have enough photos of the MacArthur store to do a separate review, but I did want to make mention of it.