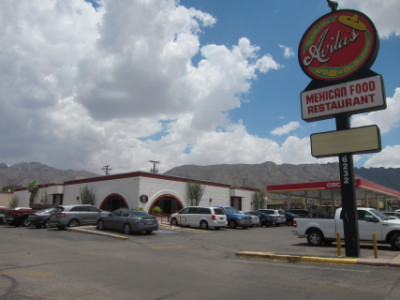 Having been in operation for over 65 years, according to Avila’s web site, this certainly qualifies as a classic restaurant. This restaurant actually started out as Avila’s No. 2, with Avila’s No. 1 being located on Montana Avenue just east of Yarbrough. When both restaurants were open I always liked the one on Montana better, and I thought it had a truer “border flavor.” In fact I saw an interview with the owner of the Mesa Street restaurant (Avila’s No. 2) where he said the food was not very spicy because he had a lot of Anglo customers (this is a paraphrase). I understand that the owners of the two restaurants were brothers, and apparently the owner of the No. 1 location did not share this philosophy because the food was spicier, and in my opinion better tasting.

This is all history, though, because now there is only one Avila’s. To me the food has improved since it became the sole Avila’s, and I can only speculate about the reason (but I have to include the disclaimers that I may not have a totally correct memory about the food or that my tastes may have changed). What I think, though, is that it is actually better and closer to the food that was served at Avila’s No. 1. It is still not so spicy that I think it would create a problem for most Anglos, who have been one of the restaurant’s main target groups. In my opinion, though, it does have a flavor and spiciness that are in line with other El Paso restaurants (this is probably not something I would have said until after the two Avila’s merged).

In my former review of Avila’s one of my specific complaints was that it was lacking in bold flavors. This is in fact the main aspect of it that I think has been corrected. I would still call the green enchiladas bland, but other items such as the red enchiladas and chile rellenos are certainly very flavorful. Even the rice and beans seem to be better than I remember them in the past.

One feature for which Avila’s is well known is that they bake the enchiladas. I am not sure exactly how this is done, but it seems to result in food that is less oily. One feature I like is that they stick some tostadas in the beans and these come out extra crispy, yet not overcooked. It also means the food is served on a hot plate (so customers are warned not to touch the plate).

Avila’s lacks some authenticity by not serving aguas frescas, and it does not have the type of food found in some local taco joints. It does, however, serve the type of combination plates and dinners that I associate with El Paso style border food. 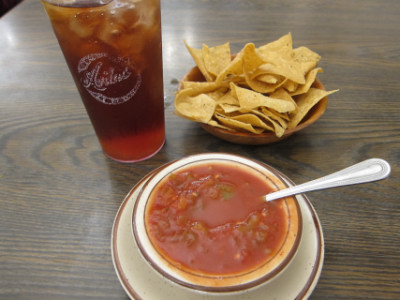 The Chips at Avila’s are solid, and live up to the standards found at most restaurants in the city. I think the best ones are always the ones they stick in the beans and bake along with the dinner, but the ones served on the table are also good.

The Salsa is the one item here that I think does not live up to the El Paso norm when it comes to spiciness. However, I can also attest to the fact that it is not gringo style (a style that you will find very often in places like Oklahoma and points north). This is the real deal when it comes to flavor and the freshness of the ingredients. 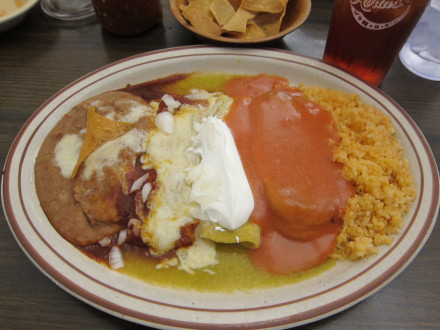 The Combination Dinner Number 2 comes with an enchilada, taco, and a chile relleno. Other combinations are also available, but they are all on the dinner menu (there is no lunch menu and they do not have lunch specials). One good thing about the combinations, though, is that you can make substitutions (in my case I got an extra enchilada instead of the taco). I usually try to get more than one enchilada when they are especially good (as they are here).

The Red Enchilada may be the “go to” item at Avila’s, and these are typical of the El Paso style. The red sauce has a good flavor and I think is probably made with New Mexico chiles (or at least they have just about the same flavor). What I do know is that it is made with “red chile pods.” The sauce here is not as spicy as is typical in New Mexico, but this is not a wimpy sauce by any means. I have in my notes that they use a white cheddar–I do not know if the staff told me this or if it is something I surmised (but I believe I got this information from the restaurant).

For my taco substitute I got a Sour Cream Enchilada with the green sauce (you have to let the kitchen know whether you want red or green). I would not order a whole dinner of this type of enchilada, but I like it as a contrast with the regular enchilada.

While the red enchilada has good cheese and a really good sauce, the Chile Relleno is the other way around (the cheese was the best part for me). I should clarify a little by saying the cheese was really good compared to other restaurants, while all the parts of the chile relleno (chile, cheese, batter, and sauce) stood up with no weak links in it.

The beans and rice are both five-star quality, but I particularly like the beans with the baked tostadas inserted into them (and the beans become a dip to put on them). 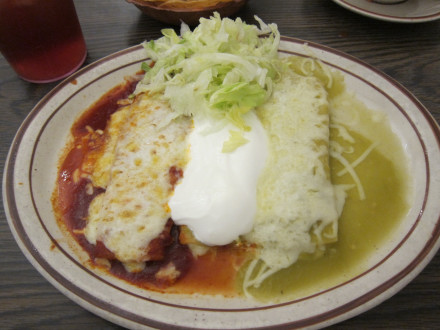 Most of the enchilada plates do not come with rice and beans, but in the case of the TriColor Enchilada Plate you get a choice (it is more expensive with the rice and beans). I think it is mainly a matter of what your appetite and expense account can handle, because it is good both ways. Visually this dinner really looks small compared to the Combo No. 2, although I thought it was filling.

The TriColor plate represents the Mexican flag, with red, white and green colors. At one time this seemed to be a very popular item in El Paso and now I find it only at a few of the places that I call “classic” restaurants (thus it is becoming more of a special treat when I can order it). I am not ready to say Avila’s has the best version because I really like the one at Su Casa, but the one here is very close.

The green and sour cream enchiladas were both made with green chile. I was told that the green chile is actually made with jalapeños (not New Mexico green chile). The surprising thing, though, is that the green sauce is actually almost devoid of any spiciness and I would describe the flavor as somewhat bland as well. I think it is very good with sour cream on top, but alone as a green enchilada it is the one item I have tried recently that really does confirm my previous conceptions of this restaurant as serving uninteresting Mexican food. 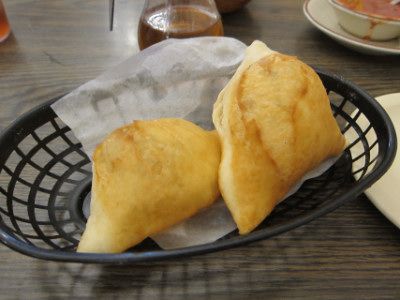 Sopaipillas come free with dinners (I believe each person gets two of them). These are definitely some of the better ones in town, and I like the fact that they do not have a lot of grease.

An Overview
There is a large menu here, but I mainly come back for the enchiladas or the combination plate. In the past (meaning over ten years ago) I also thought the tortilla soup was very good but I was less impressed with the mole or chile con queso.

While I think this restaurant is much improved from the past, some things still seem to be a problem. On one of my most recent visits the waiter made a mistake and told the kitchen to put onions in my enchiladas when I specifically asked for the opposite. At first I thought it had a good taste but after a while I began to regret having the strong onions they use here (as opposed to the more caramelized ones I found in northern New Mexico).

They do not have lunch specials, but on some plates you can save money by not getting them with rice and beans. The dilemma, though, is that the rice and beans are so good I think most people will want to get them (and this is definitely not the case at a large number of El Paso restaurants).

Sopaipillas are already included in the price of the meal, and I recommend them for anyone who can afford the calories.