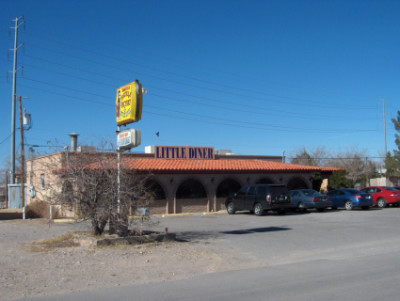 Finding this restaurant is half the adventure. Canutillo Tortilla Factory & Little Diner, otherwise known as “Little Diner” is located in Canutillo, just northwest of El Paso, off I-10 at the Trans-Mountain exit. Eastbound traffic on I-10 would want to take the Vinton Exit and follow the frontage road to Vinton Avenue. 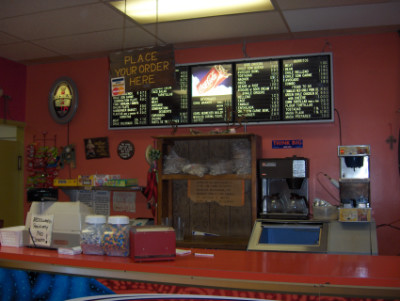 Orders are placed at the counter, or you can get them to go

There is good reason for the name “Little,” with a few booths and tables that at times can barely hold the crowd of customers that are here to enjoy the downscale, but very enjoyable Mexican cuisine. The crowd has become much larger in recent years due to word-of-mouth and magazine articles in publications such as Texas Monthly, extolling the delights of the “roadfood” served here. You will see much of this publicity exhibited on the walls, as well as the fact that George W. Bush has been a visitor. 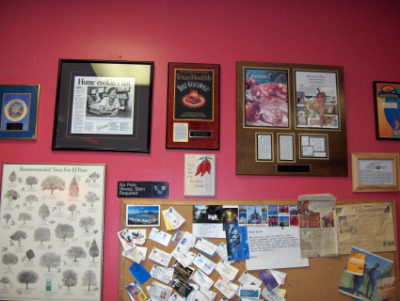 Some of Little Diner’s reviews and awards

I think many of the articles published about Little Diner are inaccurate, though. It has recently experienced a change in ownership, and the staff told me they have changed the concept of the restaurant somewhat. Recognizing that many of the customers are now tourists, they have downgraded the chile spice level from almost off the charts to a more tolerable (and I think more appropriate) level. Some of the food has changed, and I will get into details in the review. Overall I do not think it is any better or worse than before, but I think they are making a conscious attempt to make it more consistent (I think this is a good thing, but I will find out on subsequent visits).

The food at Little Diner is sort of a cross between “El Paso” and “New Mexico” style cooking, with the “New Mexico” part meaning the use of unadulterated chiles that can either be hot or extra hot, depending on the time of year and the particular crop of chiles used. El Paso style Mexican food comes through in the beans, rice, tamales, and I would say most of the items served. They also follow the El Paso tradition of cooking special tamales just before Christmas (these are the ones I like to order for myself when I get the chance). 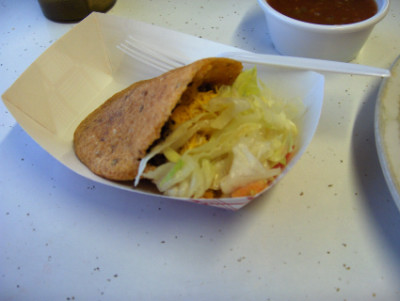 Little Diner is most famous for its Gorditas, a large shell of corn masa stuffed with ground beef or other fillings. The shell here is thicker than most places, and I would say is more flavorful. One good feature is that you can order several different fillings, but the most popular is ground beef. 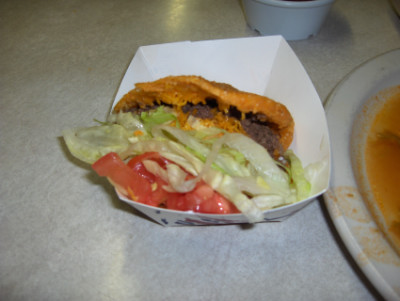 The Ground Beef is flavored with a spice that reminds me a little bit of Durkee’s.  I have come to really appreciate the flavor, especially compared to the ground beef other restaurants have to offer. As much as I like avocado, I would say that version is the one that does not really bring out the best flavor of the gordita. Little Diner provides a small cup of red salsa that I also recommend to enhance the flavor.

The gordita went through a phase where I found the shell to be exceptionally hard and crispy, but on several recent visits I have found it to be back to the same quality it had with the old ownership, and at this point it is back to being my favorite item at the restaurant. 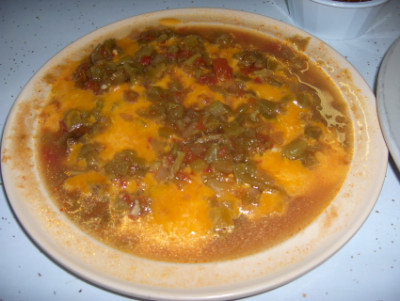 Green Enchiladas are one of the items I have come to appreciate most over the years, not because they are the best I have ever eaten but because they are unique in El Paso. Based largely on the style of enchiladas served in New Mexico, they provide a “chile fix” that is conveniently located for El Paso residents. I would compare Little Diner’s enchiladas to many served in Las Cruces, although Little Diner does not have the extreme spice level found in some of the New Mexico restaurants. The enchiladas are served flat, with the chile sauce overflowing onto the plate and the large chunks of green chile mixed with cheese on top. The traditional yellow cheese is used, I think largely as the most effective means to help cool down your mouth from the spicy chiles (the refried beans do a good job also). Personally I like to order the enchiladas without onions– I think they are too strong. The green enchiladas are probably the spiciest item you can get at Little Diner but they are less so than people would have found if there were here under the old ownership. For flavor I prefer the green enchiladas here over the red.

If you get a green enchilada a la carte or on a combination plate it will be rolled instead of flat, but this is one of the few instances where I think the flavor is just as good either way. 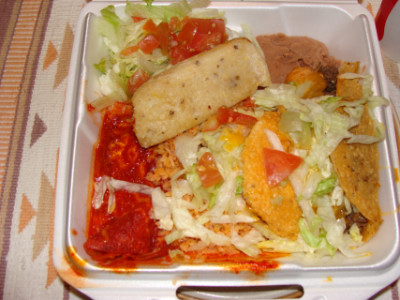 The Red Enchiladas are also good, but to me they have a very “earthy” taste almost as if they simply grind up the chile pods with no other ingredients to offset the flavor (my description is extreme, but I am trying to describe how it differs from many others). You do get local flavors with the red enchiladas, but for me the flavor is not quite as good as with the green enchiladas. 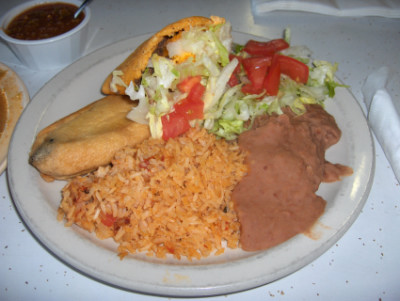 Chile relleno with a gordita, salad, beans, and rice

The Chiles Rellenos are served without sauce on top– you are left to discern the flavors of the chile, the Muenster cheese melted inside, and the egg batter. These are the closest you can get in El Paso to the style of rellenos served at Chope’s in La Mesa, a few miles north in New Mexico’s Mesilla Valley. This is an instance where the “new” food has not really changed from the old one, and the chile relleno continues to be excellent as it was before.

Refried Beans
The Refried Beans are made with lard, and they are very good as long as you do not allow them to get cold. I almost always prefer the Rice that seems to be flavored with a number of ingredients (but in the past was occasionally subject to being dry and overcooked).

Tamales
Tamales are one of the standout items (green chile with chicken and cheese is my favorite). These, along with the red chile and pork variety, can be ordered individually in the restaurant or by the dozen in to-go orders. At Christmas the popularity of Little Diner’s tamales becomes apparent when the kitchen goes into full gear, and you have to call for an order ahead of time in order to get a dozen or more to take home. The Christmas tamales are actually the same ones served throughout the year, except that two varieties are added: vegetarian with green chile and sweet tamales made with raisins (these are also vegetarian). I think there is a reason the tamales at Little Diner are so popular– they are just a lot better than I find at most other places.

Chips and Salsa
Chips cost extra, and come in a rather large order. These are not the best chips I have ever eaten, but the salsa is excellent and it is good to have something to eat with it.

Additional Comments
Like most Mexican restaurants, Little Diner has its specialties, and some items that are better than others. Overall, though, this is a very unique “diner” experience–serving that down-home style that lets you know the food is made to appeal to the local population (which is still the major clientele despite the tourists who visit).

The chile here is no longer so spicy that I think it would be hard for many people to eat (although if you are totally averse to high spice levels the green enchiladas should be avoided and possibly the red).

The restaurant is willing to make substitutions for at least one of the items on combination plates, so this is a very good way to try several items and probably get all of the ones you really want. 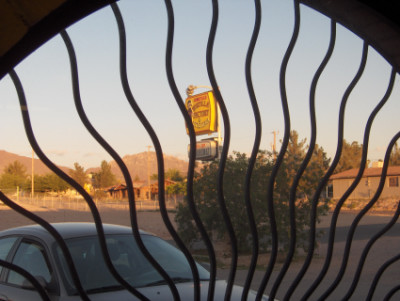 View of the Franklin Mountains from the Little Diner

With GPS widely available I do not think I need to provide directions, although the restaurant is off the beaten path and located in the middle of a neighborhood (actually it is mostly desert with a few houses scattered about).

If you saw the segment about Little Diner on Texas Country Reporter, this was shot when it had its original owners and showed the process involved in making the gorditas. After the change in ownership I thought the gorditas were no longer like the ones shown in the video, but recent visits have convinced me that they are back to their former glory.

The green enchiladas and chiles rellenos are also items that I consider to be among the best in El Paso, and in the case of the chile relleno it is one of the best I have found anywhere. Tamales are also a very good choice here.