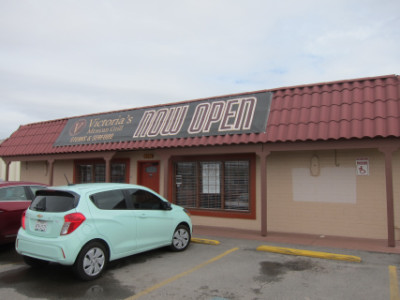 Although Canutillo sits very close to the New Mexico state line and it is home to at least a couple of well known New Mexico style restaurants, Victoria’s is firmly in the camp of El Paso style Mexican food. There is a reason for this–this is the same Victoria’s that used to be located on Dyer Street in northeast El Paso (although I remember seeing the sign on the old restaurant which said “Victorea’s”). The employees confirmed, though, that this is the same restaurant (and signs inside say it was founded in 1985 although this location has only been in operation for a short time).

The official name of this restaurant is Victoria’s Mexican Grill Steakhouse. This gives an idea of what they consider to be their best dishes, but I have not tried any of the steak dishes here. The Mexican plate is one of the largest in El Paso in terms of quantity, and I think I might have a difficult time eating one of this restaurant’s steaks. The Mexican plate does give a taste of Victoria’s meat, though, in its shredded beef taco. The staff gave me a list of what they consider to be their signature dishes, and they are: Combination Plate, Tacos Deshebrada, Flautas, Chile Verde, and Chile Colorado. I notice that no steaks are included on the list, although the shredded beef (deshebrada) tacos are on the Mexican Plate.

The restaurant is somewhat like Dr. Who’s police box “TARDIS” that looks bigger on the inside than it does on the outside. Adding to this illusion is the fact that there seems to be very limited parking outside yet everyone appears to find a space (and the restaurant gets very crowded at times). My photo shows what I think are all the parking spaces in front and there are a few on the side of the building, but it seems that there must be extra parking somewhere that I do not know about (or else it might be in another dimension as would be possible on the Dr. Who program). 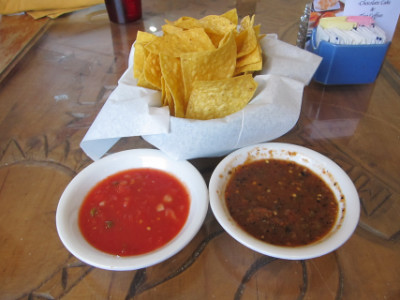 There are two types of Salsa here, which gives people a choice in case one is too spicy (but both were within the norms of what is traditional in El Paso). The Chips were excellent as well. 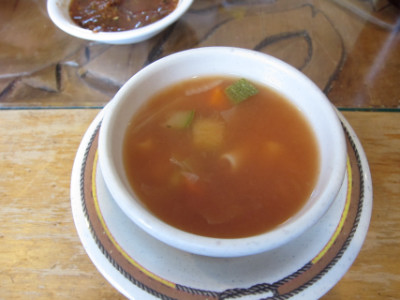 Victoria’s is among the small group of restaurants that gives a complimentary bowl of soup to customers, and it is an even more exclusive restaurant because of the fact that this soup is actually very good. The soup is not spicy and is a lot like American style vegetable soup, except that this has a lot more flavor. 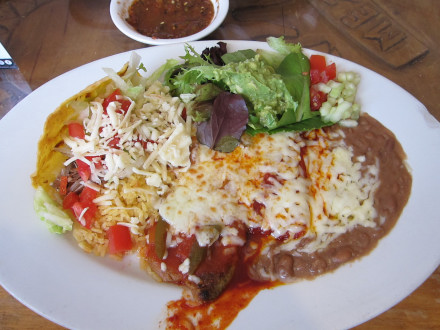 There are several combination plates here, and I think the one with the best choice of items is the Mexican Plate. This one is my favorite because of the chile relleno, but the shredded beef taco and enchilada are also very good choices (I think especially the taco).

The Chile Relleno here is not terribly spicy, and is probably what would be considered mainstream in El Paso when it comes to spiciness. It is covered with sauce and cheese, consequently it is hard to pick out on the photo except that the stem can be seen sticking out on the bottom. The cheese definitely tasted Mexican style, and perhaps most importantly the relleno is not too greasy. Having the sauce and cheese on top makes this more El Paso style rather than classic New Mexican, but I consider it to be very good regardless of the style.

The Red Enchilada is very similar to the ones in New Mexico, and I think it must be made with New Mexico chiles. I do not know the recipe they use here, but it had a dark red color and did not have an over-complicated flavor (the main element of it is the chile itself).

The Shredded Beef Taco comes standard on the Mexican Plate (you do not have to ask for an upgrade from ground beef). This is one of the characteristics I find in classic El Paso restaurants as opposed to some of the cheaper knock-offs or the ones that are Ciudad Juarez style (although shredded beef is served in the more upscale restaurants there as well). The taco at Victoria’s is not greasy and compares favorably with other restaurants.

Rice and beans are made with the same high standards as the main items, but I thought the beans were especially good. 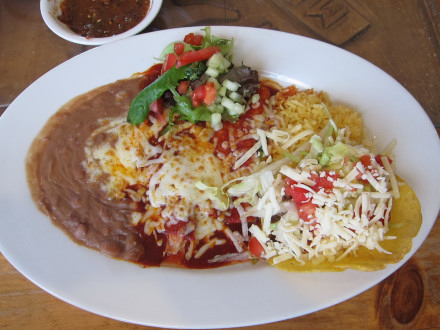 This is a photo of the Tamal Mexican Plate from which I sampled the tamal. I am not sure about the other items because they are all covered with sauce, cheese, or condiments (but it does not include a chile relleno). The tamal had a thick masa and very good pork inside.

Other Notes
The one thing I thought I should warn people about is that they add an extra fee to your bill if you use a credit card. On one visit they told me about it so it was no problem. The next time I had forgotten about it and I did not find out about the extra fee until they had already run the credit card (and then it was too late to tell them I could pay cash instead).

The flavor here is what I call classic El Paso style Mexican food, and I really thought it was quite good. Prices are not too bad either. The biggest down side to me is that I like the variety in a combination plate, but to get one with a chile relleno (which I think is probably the best item) there is so much food overall that it is hard for me to finish. In other words, the food is great but I think other restaurants package it better.

The Little Diner is probably the most famous restaurant in Canutillo, and I think is probably about equal to Victoria’s in quality (but I also really like Peppe’s which is another popular restaurant). The style of food, though, is quite different at these restaurants. Little Diner and Peppe’s are New Mexico style, but even these have little in common except for the fact that the chile comes from New Mexico and they prepare it in the same style as some of the New Mexico restaurants. I have reviews for these restaurants which can be accessed from the Index on this site. Victoria’s serves classic El Paso style Mexican food, though, and has been one of the city’s most well known restaurants since its days on Dyer Street.