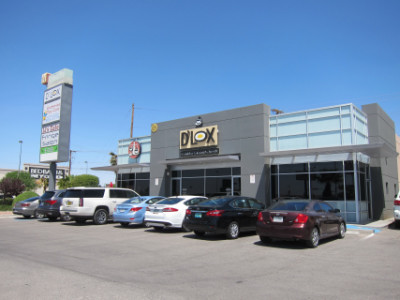 It is somewhat hard to categorize D’Lox–the restaurant’s web site describes it as “Breakfast, Brunch, Lunch.” It closes at 3:00 p.m. every day, so these are in fact the meals that are served. Sunday is buffet only (you cannot order a la carte from the menu) so this is the “brunch” day.

I think much of the food is strait-forward American style, but probably “New American” is a better description for the overall menu. The veggie panini I ordered is somewhat Italian style, although it could just be American food with more garlic and some Italian ingredients. Other items I have tried had more of a traditional American flavor (which I think is plenty good enough when done the right way).

I went once on Sunday but decided the buffet they had was a little too much for my pocketbook (you cannot order menu items on Sunday). Reviews I have seen for the Sunday brunch, though, indicate that people enjoy the food and do not mind paying the money (but like me they say you need a pretty good appetite to make it worth the money).

I decided that instead of this I could visit several times and try the items one by one, and at this point I think I have a pretty good sample of the food.

The restaurant is upscale (but casual), and the best part about it is that the service is very good so that I feel that you really can call it an upscale restaurant. They specialize in sandwiches and bagels, though, so this describes the type of “upscale” that you will find. 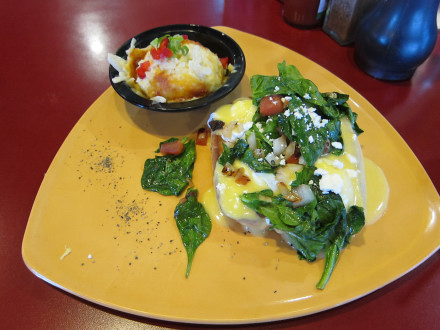 At D’Lox there are so many types of Eggs Benedict served that this really looked like its own section of the menu. The Benedict Florentine I ordered is really the only breakfast item I have tried at the restaurant, and this is a dish I have probably had a handful of times in my lifetime. My focus is not usually on fine dining, but of course when I have a chance to try this type of food I am all too happy to give a review of it.

In the case of D’Lox, though, it confirmed my reasons that I usually do not spend a lot of money on upscale food. There were two egg yolks on my plate, but they were not cooked the same. One was runny and had enough egg yolk to run over the white part of the egg and give me the good flavor I was expecting.

The other egg yolk, though, was cooked into a solid texture with nothing to run over the rest of the egg. I randomly chose the good side first and finished it, not expecting that the other side would be different.

The other flavors were good, though, so I at least now know that I like Benedict Florentine. Perhaps next time, though, I will skip the one at D’Lox. 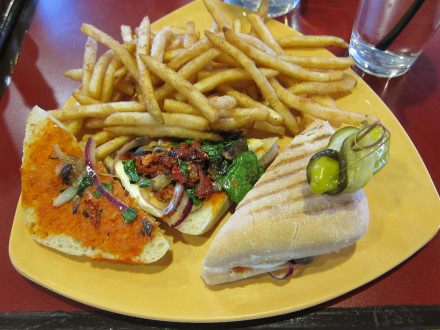 The above photo shows one side of the Vegganini Panini open to show the inside contents, and the other side the way it looks when it is served. This was actually a very good vegetarian meal, and one that I wish had been available in El Paso when I had a strictly vegetarian diet. I only mention this to say that I have had a lot of experience with vegetarian food, and I definitely think this sandwich is one of the more upscale versions of it you can find.

The sauce on the sandwich had a tomato flavor, and I liked the way the different flavors came together on this sandwich. The only thing I can say is that Ripe had a better veggie panini (which they no longer have on the menu), so the D’Lox sandwich is now by default the best one in town I have tried. 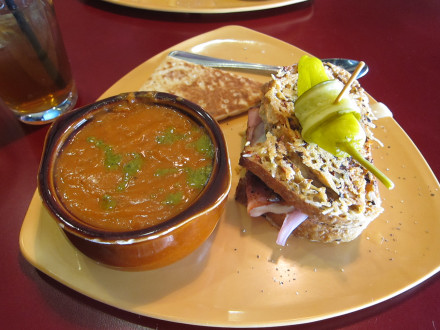 On the Cubanito sandwich I will start with the part I did not like much, which was the pulled pork. I am used to barbecued pulled pork in Oklahoma City, and also notable is the Cuban sandwich at Cafe 7 in OKC (in comparison the one at D’Lox was a little disappointing). The strengths of the sandwich here were the ham and the cheese, and overall I would say the sandwich is good. I did not know what to make of the sauce because I do not know the ingredients in it, but again I think the one in Oklahoma City was a little better.

The Tomato Soup was a good complement to the sandwich, but I do not know that I would order it on its own (as opposed to the Cubanito, which I think makes a pretty satisfying meal). 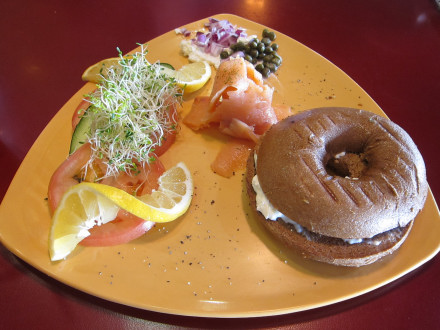 The 3D Lox Bagel comes on a plate with all its components, and you construct your own sandwich the way you wish. I have had lox many times before and I think I was expecting this one to be a little more flavorful, but the sandwich was fine when I put it all together (which is my way of saying it was better than average but not one of the most memorable sandwiches I have had). Unlike the Cubanito, I do not think I particularly want to order this again.

The one thing I really did not like on the sandwich was the sprouts, although this is just something for which I do not have much of a personal taste.

A Summary
It is somewhat difficult to give a definite rating to this restaurant because I really liked the panini and half of my eggs benedict, but the other items were all over the scale from good to mediocre. Although I was reluctant to try the Sunday buffet, I think this is where people can really get a good taste of the food at D’Lox. On the regular menu I know that they have very good items, if you just know what to order.

A number of the new restaurants in El Paso have the type of upscale food found at D’Lox, and as of this writing there are still a number that I need to visit.