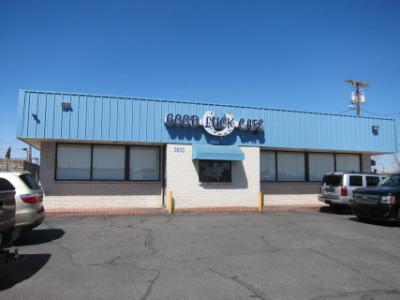 Sometimes it is difficult to compare one cuisine to another in terms of giving them a rating because it is quite subjective. It occurred to me, though, that good Mexican food can be quite similar to good Italian cuisine because of the fact that they have bold flavors matched with a starch base (pasta for Italian and rice, beans, tortillas, etc. for Mexican food). My eating satisfaction is quite similar for both of these, both are very much garlic based, and both are usually moderately spicy but occasionally very high on the Scoville Heat Level.

Good Luck Cafe is a popular diner with somewhat spartan seating (or you can sit at the counter). As such, you get a different ambiance than you would at a good Italian restaurant. Some of the perks of a diner, though, include much lower prices and a varied menu that includes a range of breakfast items. 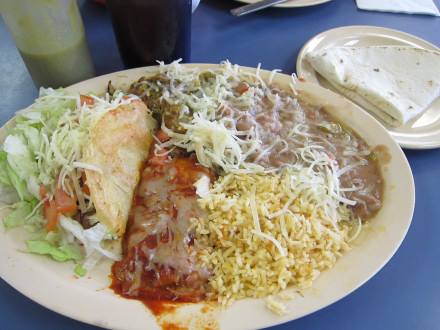 One drawback of Good Luck Cafe is that it only has one combination dinner, called the Mexican Plate. The upside is that it is very good, and if you particularly like one particular item you can order this one on its own plate. The only choice I had was between a ground beef taco and one with shredded beef (deshebrada). Either way, I would recommend trying this plate.

I thought the best item was the Deshebrada Taco, although all three of the main items were just about equally good. The taco was slightly soft but fried enough to have a good flavor, and the meat was flavored in a way that made it one of the best in the city.

The Enchiladas had a classic flavored red chile sauce, and I liked the fact that they did not taste greasy.

The Chile Relleno had a more obvious oil flavor than the other items, but was by no means swimming in grease as some chile rellenos are, and had a very good flavor. Most of the seeds had been removed so that it was not super spicy. 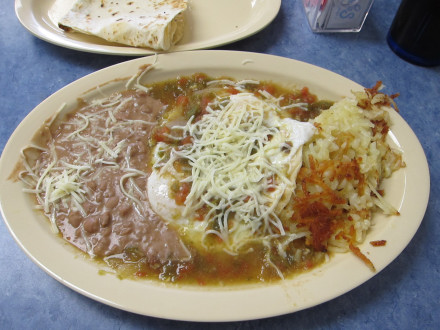 Although a good part of the restaurant’s business is at breakfast, the choice of Mexican style dishes is somewhat limited. I figured the Huevos Rancheros would be a good bet, and this turned out to be correct. The eggs were cooked just right, which was not my main concern about the dish but it would have been a huge factor if this were not the case. The green chile was another aspect of the dish that I was expecting to be good, and if anything it exceeded my expectation. The flavor was good, and the spice level was about perfect (about 4/5 on the spice level for a normal bite, or 5/5 if you get a large concentration of green chile in a single bite). The dish does not have queso (El Rincon de Cortez is known for its version with queso on top). It did have shredded cheese, though, and I thought this was an excellent dish. 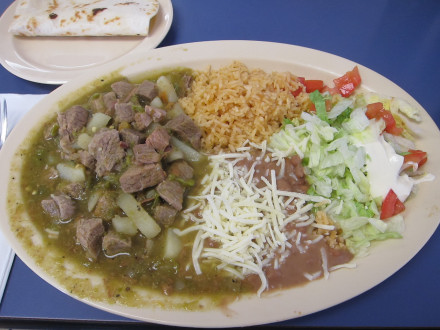 The Chile Verde was somewhat of a surprise find at Good Luck Cafe because it was better than expected (based on the versions I normally find at restaurants). Most restaurants have somewhat lackluster chile verde even if their other food is good, but here I think the chile verde is actually one of the restaurant’s better dishes. It is made with beef (this is not a given, since some restaurants use pork) and I thought it was a much better cut of meat than I have found at many places. The potatoes were crispy in a good way (they also had flavor). The green chile was spicier than on the huevos rancheros, and I thought it was a firm 5/5 on the chile scale (although not mouth-numbing hot).

I also need to mention the fresh flour tortilla that definitely tasted home made. 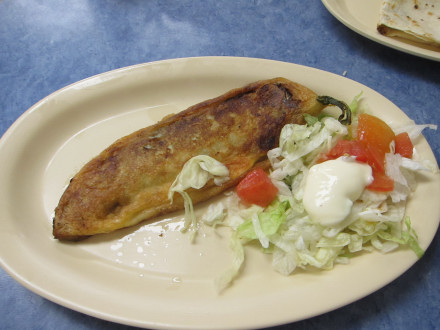 Most of the menu seems to be based on individual items that you can use to build your own plate (although each item is served on its own plate). In any case, this was my thinking when I ordered a Chile Relleno to go with another item. I had tried the chile relleno previously on the Mexican plate, but this one seemed more greasy (I think both the good and bad points of a dish are highlighted when they are ordered individually instead of on a combination plate). I would say not to expect the best chile relleno in El Paso here, but it is good and something worth ordering).

Photos of Items I Have Not Yet Tried 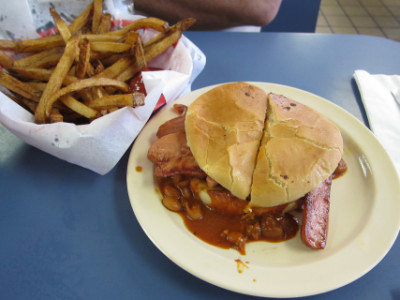 I did not sample the Hot Dog with Chili so I cannot give a review of it, but it is one of the “diner” options available along with the Mexican food. It is interesting that the custom in El Paso is to serve hot dogs on a round bun.

I did try the french fries, though, and found them way too far on the greasy side.

Other Impressions
When I came here for Sunday lunch the restaurant was completely full, and is obviously very popular. I do not understand the popularity of some restaurants, but the flavor of the food and lack of grease (in most items) made it obvious to me why Good Luck Cafe has so many loyal patrons. It seemed to be particularly popular with families who had come here for one of their special meals of the week.

Spanish is the predominant language here but it is not necessary for ordering or asking questions about the food. I think the restaurant would be totally comfortable for tourists provided that they are OK with diner type seating.

There are so many good Mexican restaurants in El Paso I could not say that this one especially stands out, except for the fact that the Mexican food tends to be uniformly good. I thought the huevos rancheros and chile verde were even better than the items on the combination plate (which itself was very good). So far all of the Mexican food has turned out to be a hit with me (the french fries, though, do not portend particularly well for the diner side of the menu).

They do not serve chips here (I think this is one of the reasons they have such low prices). The salsa was in a bottle as was so spicy I did not find it advantageous to add it to the items on my plate. The home made flour tortillas, though, are a must try.

I do not think they have horchata or other aguas frescas, but I actually seldom find these drinks in the restaurants located south of Interstate 10.

Good Luck Cafe is located in the barrio where you can many times find the best food if you happen to find the right place (and this is the right place). The family atmosphere of the restaurant always makes me feel welcome, and on top of everything else you get very good prices.