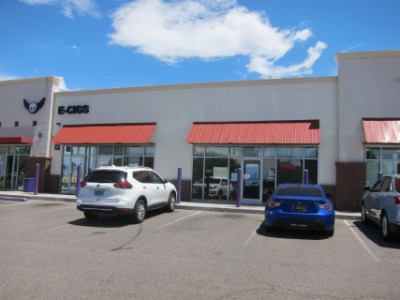 Thai House is a restaurant that has been around for a while, but it recently moved to a new location on Carlisle Blvd. just south of Interstate 40. Specifically, the strip shopping center in which it is located is at the southeast corner of Carlisle and Indian School, and a very visible neighbor is the I Scream Ice Cream Store. 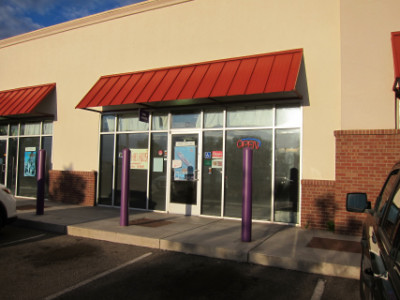 At the moment there is no outside sign, and you pretty much have to know the restaurant is here in order to see it. There is a hand made sign in the window shown in this photo, but even with this you almost have to be looking for it in order to notice it. I would say go to the I Scream place and then go one or two spaces to the north for Thai House. 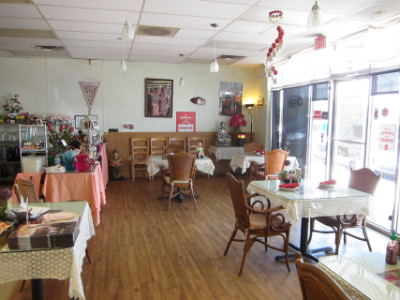 The interior is very comfortable and “homey.” You almost feel as if you are in a Thai home because it has an open kitchen where you can watch your food being cooked as you sit at the table. The owner makes you feel very comfortable here and takes care of your needs, but she also is busy cooking and performing all restaurant duties in a one-woman operation. She did have some help when I went on a Saturday evening, but the actual cooking is a one person operation.

I have looked at the Yelp reviews and I think they do a good job of describing the restaurant, providing photos, and making recommendations. I can only add my two cents and say that the food tastes exactly as it looks–like it comes from a home kitchen in Thailand.

It was not actually the Yelp review that guided me here, but an invitation by my friend and Albuquerque restaurant expert Gil Garduño who himself had just tried the new location for the first time and was anxious to make another visit (and also included a review on his web site). I had the same desire to make a return visit, and did so on my way back from Colorado to El Paso. One tip I will give travelers is that this restaurant is very convenient from both Interstate 25 and Interstate 40 (but for now just do not expect to see a sign in front of the restaurant). 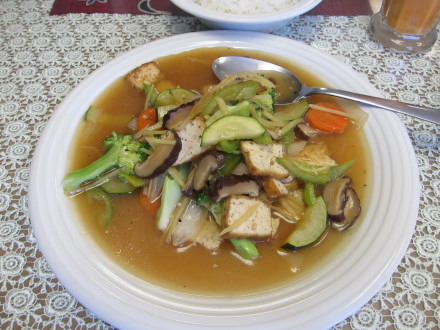 When I was in Seattle and went to Thai restaurants frequently, ginger tofu was usually my first choice from the menu. I soon learned that the Thai name was Pad Khing, which was also frequently listed on the menu as ginger stir fry. The flavors of this dish are such that I do not think ordering it with meat causes noticeable enhancement, but the somewhat neutral nature of tofu allows me to enjoy the other flavors even more. I also did not worry about being full after eating a meatless meal because the amount of tofu and vegetables is usually substantial (as it is at Thai House).

Chinese medicine stipulates that ginger should be eaten early in the day when you need the energy it provides. I was never really aware of the principles of Chinese medicine when I was getting into the habit of ordering ginger tofu, but somehow I knew instinctively that it was a very good dish to order at lunch. This carried over to my instinct to order it for my first visit to Thai House at lunch time, although I think the flavor of this dish is good any time you order it. I would say the ginger flavor is somewhat subtle and is blended with the other ingredients in the dish as it should be. The tofu is just my preference and others will want to have meat, but I think it will be good either way.

Pad khing is not a spicy dish because the ginger itself has a very strong taste. The menu states that you can order your own spice level with any dish, but with restaurants like this one where they prepare the food in a home cooking style I usually figure that the chef knows how to add the appropriate spice level for the best flavor. I think I would have liked a higher spice level on this dish, but regardless of this the ginger flavor was very good and I was able to enjoy one of my favorite Thai dishes. 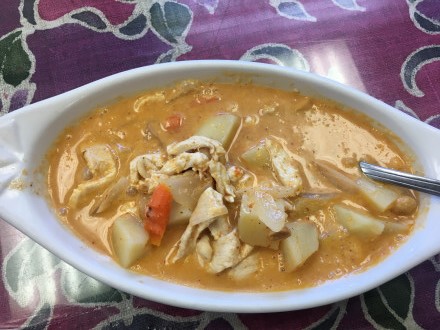 When I sampled my friend Steve’s dish I initially thought it was red curry but I later found out it was Massamun Curry (which I think is derived from Indian style curry combined with Thai flavors). Wikipedia states that Massaman curry typically contains cardamon, cinnamon, cloves, star anise, cumin, bay leaves, nutmeg, and mace (spices that are not typically used in Thai curries) combined with more local flavors such as chili peppers, cilantro seeds, lemongrass, galangal, white pepper, shrimp paste, etc. I do not know if this is Thai House’s recipe, and I am not sure why their name for the dish is a little different, but nevertheless the dish was very good. Wikipedia also points out that this is a mild curry, so perhaps this is why I did not think it had any lack of flavor even though it had a low spice level.

This dish also had a good amount of potatoes, another feature that I think separates it from the typical Thai dishes that are found in most restaurants. 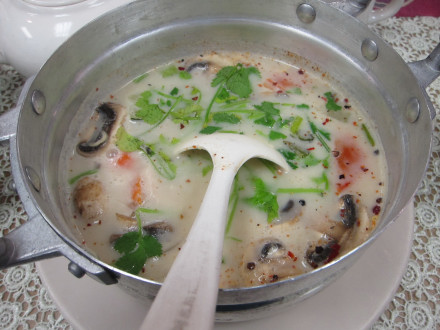 The menu had a couple of soups listed under the “Chef’s Specials” on the menu, one of which was the Thom Khar Gai. This was my favorite dish that I have tried at Thai House so far, and it made me think that the chef’s specials designation has some real substance behind it and is not one made just for marketing purposes. This is a coconut soup flavored with galangal, lemongrass, kaffir lime leaves, fish sauce, and lime juice (several decidedly Thai flavors). It was specifically the lime leaves that enticed me to order the soup, based on dishes I have had in other restaurants with the same ingredient. The others add an important flavor component as well. I think several dishes at Thai House have some combination of these ingredients, but they are more pronounced in ones where the ingredients are part of the name (the khar in this dish means galangal).

For substance in this dish was mainly provided by chicken (gai) and mushrooms. In terms of flavor I would not try to substitute anything in this dish, including the spice level (it was not spicy but I do not think it is supposed to be a spicy dish).

After having eaten coconut flavored rice in Colorado Springs, I thought this was a fitting finale to this trip where I could indulge to an even greater extent with the coconut theme that seemed to be developing. This was a delicious soup, and one of the best I have had anywhere. It is not something that I normally order, because I usually prefer the curries or the stir fried dishes (such as pad khing). At Thai House, though, I think this is definitely a “must try” (even if others are like me and do not normally order this dish).

Other Observations
The Thai tea and the hot jasmine tea were both especially good.

It takes some time for the food to be served because each order is individually prepared. This is pretty standard for Thai restaurants, though, and it was nothing out of the ordinary.

The default for all the dishes I tried seemed to be at a low spice level, but the menu states that you can order the spice level you want for any dish. If I am able to return I think I would try a higher spice level on the ginger dish, but the others were ones I would not change from the default.

Prices are very reasonable, especially for this type of quality. The menu is posted on the restaurant’s Facebook page. I thought the selection of items was very good, and one of the good things here is that you can talk directly with the chef if you have any questions.