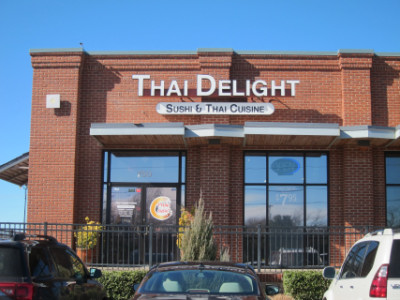 Update Jul. 2020: Thai Delight is now at normal operation with the dining room open. This is subject to any Health Department mandates including use of masks, spacing of customers in the dining room, etc. During the health emergency they were doing delivery and they plan to continue it afterward (they do the delivery themselves). There is one delivery price for anything up to five miles from the restaurant, and a higher price for delivery from five to seven miles. They indicated to me that during the Corona virus emergency they would be willing to go farther than seven miles but I do not know the details of this or whether this policy will be continued.

In 2016 I had my best lunch experience of the year at Thai Delight, and this is what has made me determined to return whenever possible (it was the fresh ginger that made such an impression on me). Thai food ranks high among my favorite cuisines, so this had something to do with it. However, not everyone does Thai food this well, and gives the service and ambiance to complement the food.

The former Thai Palace in Edmond was my favorite Thai restaurant in the OKC metro until it closed, and this has served as my standard for comparing other Thai restaurants. Thai Delight certainly ranks high in serving excellent Thai food.

I find that I need to break down the menu, though, into the categories of curries and stir-fried dishes. Thai Delight has separate cooks that specialize in these two types of food, and I have great respect for a restaurant that will provide chefs with this kind of expertise. For my taste, though, the stir-fried dishes are the ones I have found to be really special here. I have not tried everything on the menu so I may also find some exceptional curries, but for now the stir-fried menu is the main reason I want to keep coming back.

Thai Delight also has a sushi menu which I have not tried, and I cannot comment about the food. I know that the Thai food cooks are from Thailand, though, and this is evident by the type of food they serve.

The restaurant is located in a shopping complex at the southwest corner of 33rd St. and Broadway in Edmond. I would call the complex upscale, but for some reason they have raised the level of all the stores up a half flight of stairs. After several visits to this restaurant and Pho Bulous next door (as well as an Indian restaurant which used to be in the same center) I finally found a ramp on the north side of the building to give access to anyone who does not want to use the stairs. It is located at the north end of Charleston’s Restaurant (at the opposite end as Thai Delight) but it will work for getting to all the businesses in the center. 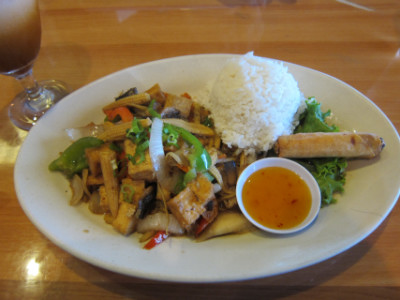 Fresh ginger on the lunch menu

Thai Delight has quite a good selection of items on the lunch menu, including Fresh Ginger. This was the dish I tried on my first visit, and it remains probably my favorite item at the restaurant. Some notable features of the fresh ginger were a vibrant flavor and the fact that it was not too sweet. The ginger was strong but well balanced by the sauce and the other ingredients. All of my orders have been with tofu, which is usually my preference and which also allows me to compare this dish with countless ones I have had in Seattle and other cities. 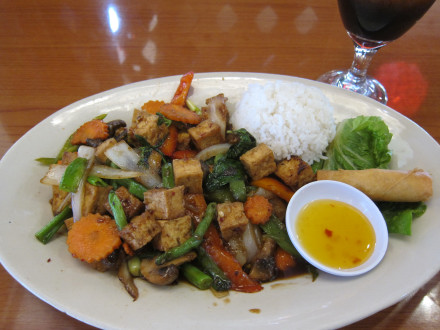 Spicy basil from the lunch menu

Spicy Basil (listed as Basil on the to-go menu) at first did not wow me, but I asked for spicy fish sauce (prik nam pla) which raised the dish to one of the best I have had in the Oklahoma City area. This indicated that it had a very good underlying flavor but it just needed to be spicier (the dish comes at a default 3-star spice level but the waitress suggested that next time I should order it at 4 or 5). The waitress said it was already made with fish sauce but what I added just intensified the flavor. Note: I got a takeout version on a later visit that was spicier to just about the right level, but this was after I learned that I should ask for it this way.

The vegetables on this dish were fresh and a little crunchy. Ingredients such as the carrots and green beans actually had a good flavor (not something I say often about carrots or about green beans if they are not cooked correctly). 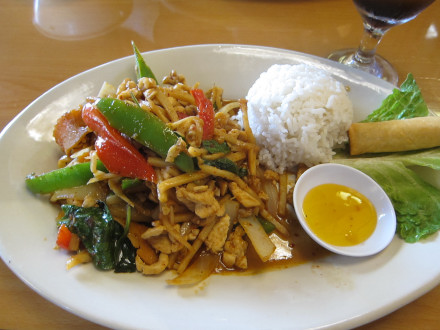 For some reason they serve Spicy Bamboo with Chicken on both the lunch and dinner menus, but it does not come with any other type of meat. This comes with a red curry paste that I wanted to try, but I was not overly impressed with it. This does not mean the dish was disappointing, because it was a treat to have a dish with this quantity of bamboo shoots. Like most dishes here, it seemed to have an explosion of flavors because of the different ingredients that were used. In a way, though, it was almost overpowered by the large quantity of chicken (but this certainly does not seem to be a bad thing). This is definitely one of the more filling lunches I have had at a Thai restaurant, and I imagine the dinner portion would be too much for me to eat at one sitting.

Kao Soi
I tried Kao Soi at Thai Delight’s sister restaurant, Sushi-Thai Delight on Interstate 35, and this turned out to be a very impressive dish (probably equal to the fresh ginger stir fry in the probability that I would order it again). The highlight of the dish was the spicy yellow curry. 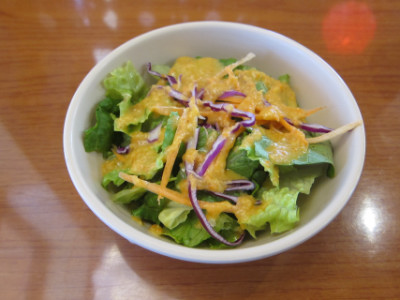 The Salad was also very good, but even better because it was free. I found the ginger dressing to have a good flavor, but you can also choose the regular dressing or get one of the two soups that are available (but I do not have a list of these).

A spring roll also comes with the lunch special (and this was one of the better spring rolls I have had).

Thai Tea
I tend to put Thai tea into one of two categories–ones I like and ones that are disappointing. The one here was the former, so I was happy. However, I also liked it more than most.

Lunch
Thai Delight has 17 lunch specials for $7.95, and there is a wide choice of items including basil, curry, cashew, ginger, eggplant, broccoli, and pad thai (each has a choice of chicken, beef, pork, tofu, or veggie).  There are also a couple of chicken dishes (my waitress said the spicy bamboo chicken was one of her favorite dishes here). There are also fish choices for $8.95 and duck for $11.95. I have to say that I was also impressed that the prices were the same in 2020 as they were when I made my first visit in 2016.

Dinner
The Thai menu is slightly more expensive for the dinner items, but they do have quite a good selection of items. These include additional types of curry not available at lunch such as Panang, Massaman, and pineapple curry.

The bulk of the Japanese menu seems to be sushi, but it is mostly rolls with a small selection of a la carte sushi/sashimi. There are also Japanese dinners such as tempura, kutsu, and teriyaki.

Other Details
The restaurant does not use MSG, but the employees said there might be some in the soy sauce and other sauces they import from Asia. I have not experienced any noticeable levels of MSG in the food.

The dining room was very large and comfortable (this is not the main reason I find this restaurant to be an enjoyable experience but it is part of it).

The service at lunch seems to be highly efficient for getting orders out quickly.

I was able to have some good conversations and ask some questions to the staff after the lunch crowd died down. One of the things I learned is that Thai cooks prepare the Thai food (one person for the curries and one for the stir fried dishes). The style of the food is from the Bangkok area, but the kao soi (egg noodles with yellow curry) is northern style. The bamboo chicken which I previously mentioned has a chile paste which is not made with coconut milk, and is this restaurant’s version of pad prik khing sauce.

I would give the tip to others that for many dishes the prik nam pla (spicy fish sauce) condiment they will give you seems to provide added flavor or to bring out the flavor that is already there (depending on which way you look at it).

I originally thought this restaurant had another location in Norman, however I found out that restaurant is owned by the same extended family but does not necessarily have the same food. There is another Thai Delight in east Edmond, though called Sushi-Thai Delight (with the same food as far as I can tell). 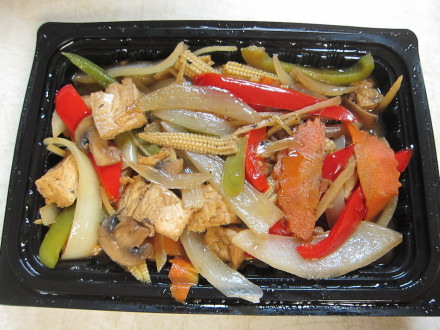 I have tried two items for takeout that I also ate in the restaurant, and neither one disappointed. The Fresh Ginger had the same flavor and impressed me every bit as much as the dine-in version. The one pictured was the dinner size, and was enough for two meals at home (the substantial portion of rice that comes with it makes this possible). 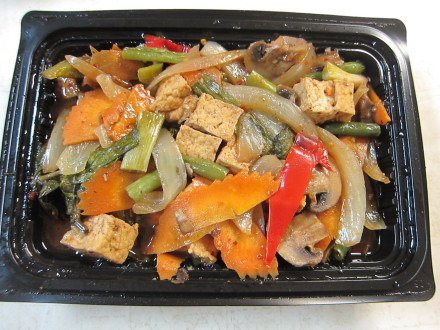 The takeout meal of Spicy Basil was also excellent, and in fact seemed to be better than the restaurant version (I asked for this one to be spicier than their default level). This was also a dinner portion, and was enough for two meals for me. Like the ginger dish you can have a choice of meats, and I usually choose tofu on the stir fried dishes.

Conclusions
The Thai food here is the real deal, but they just do not have as many dishes on the menu as most restaurants that have a similar quality. The people who prepare the food are from Thailand, something I already pretty much figured out just from tasting the food. Many Thai restaurants in Oklahoma City have very good food, but I have to say that Thai Delight is one of my favorites.

I am rating Kao Soi as one of my favorite dishes, but I actually did not eat it here but at their other restaurant Sushi-Thai Delight on Interstate 35 near 15th Street in Edmond.

I don’t know anything about the sushi here, except to say that they have quite a large variety of it.

Cuisine: Thai & Sushi
Cost: $$
Hours: Open Daily (closed from 3 to 4:30 pm)
Accessible: Yes (look for the ramp on the north side of Charleston’s Restaurant)
Smoking: No smoking