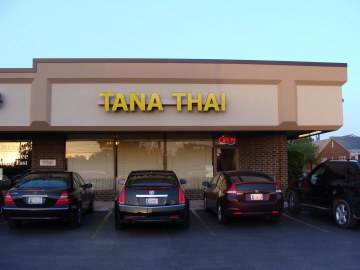 Tana Thai Bistro is located in the same strip commercial center on North May Avenue as Papa Dio’s Italian Restaurant, and like Papa Dio’s, has a rather unassuming exterior. As is the case with Papa Dio’s, though, the outside gives little clue to the treats that await inside.

Tana Thai is small, with about a dozen tables, and is a family run operation. It is a little more upscale than most small Thai restaurants, operating under the “Bistro” concept with a very limited menu selection. The dining area is fully carpeted, and chairs are very plush (but the booths have wooden seats). It is also interesting that the entrance is through a double door to help keep out the wind, cold, and other harsh weather that is commonly experienced in this part of the country.

The menu includes a few noodle dishes, some soups, salads, and three types of curry. Drinks include Thai tea, but I was not very happy with the hot tea that was brewed with a single bag, but priced as if it were loose leaf tea. 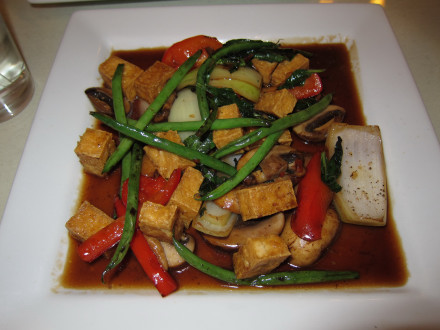 The Basil Stir Fried was one of the first dishes I tried at Tana Thai, and was something that kept bringing me back to try other things. This dish had all the strong Thai flavors I would expect from a good Thai restaurant. The menu says anything can be prepared without meat, and I ordered this dish with tofu (that was prepared very nicely). I loved the basil flavor, and thought the vegetable selection was good. Steamed rice was complimentary, but at the prices that are charged, it should be. 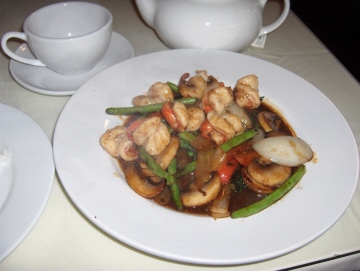 The Basil Stir Fried with Shrimp was even better than the tofu. The shrimp was quite fresh and large, making this the only type of shrimp that really excites me. Normally I am not really a shrimp lover, but I thought this was one of the best dishes at Tana Thai. 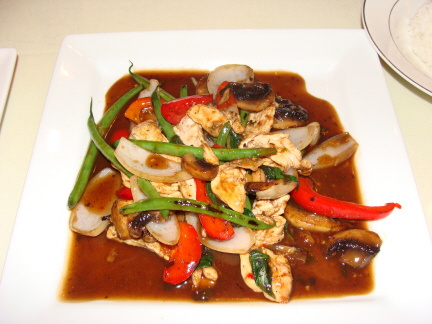 The Basil Stir Fried with Chicken was another good choice, although I thought it was better either to get the shrimp or to order the pad kee mao which also had a good basil flavor but was more filling because of the noodles.

Curries
The Panang Curry was another of the early dishes I tried, but I thought it lacked a little spice and flavor for my taste. However, I thought the tofu that came in the non-meat version and the green beans were quite good, and overall this was a pretty good dish. 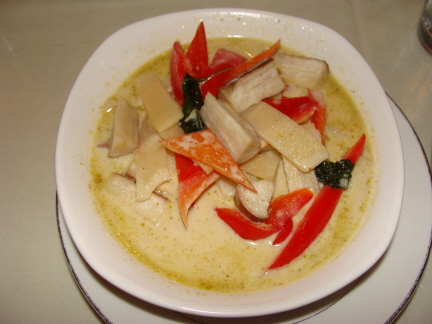 For a long time I was thinking I could get better curry elsewhere, but when a waitress suggested that I try the Green Curry this turned out to be a very good tip. In fact, the green curry at Tana Thai had a flavor that brought it at least to west coast standards, and I suspect to Thailand standards as well. I ordered mine a little less than medium spicy, and this probably made me appreciate the fact even more that the flavors stand on their own with or without the element of hot chiles. I do not know if it had more coconut milk than most green curries or just better coconut milk, but I would call the flavor very smooth and enjoyable. One interesting feature of the green curry is that the vegetables include an Asian style eggplant which I really liked. 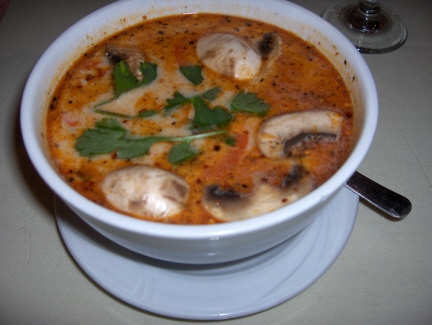 Tom Yum with Shrimp was a spicy soup that seemed simple, but the mix of flavors indicated that there was more to it than met the eye. The Thai word yahm means something “mixed together,” and that is exactly what this dish entails. One of the items mixed in is red chile powder, which at the two-star level made it about as spicy as I have ever experienced with this dish. The three-star version would be entirely too hot for me. I’m sure the flavor would be just as good, though, provided a person could eat it. 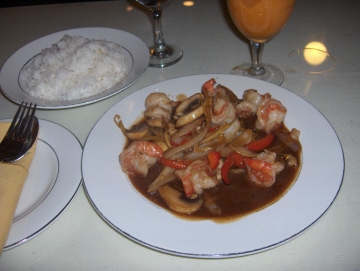 Shrimp dishes are priced so that they offer some of the best values on the menu, so in recognition of this fact I ordered one of the stir fry choices: Ginger Brown Sauce with Shrimp, sauteed with ginger, onion, bell peppers, and mushrooms. This type of dish is usually known as pad khing, and when done well is usually one of my favorites. The shrimp at Tana Thai made this better than the chicken and other versions I have had at several other places. The brown sauce had a good ginger flavor, but I thought it was so sweet it reminded me of some of the less well respected Seattle Thai restaurants that seem to cater to American tastes rather than Thai. I have done a little bit of research on the subject, and it is certainly permissible for Thai chefs to add sugar to many dishes, especially since this helps balance the spicy chiles that are used. I thought this dish went overboard, though, and was too sweet for my taste.

Update 2020: I ordered this dish with tofu and as before the sauce was very sweet, but the tofu it definitely seemed too sweet. Otherwise, though, I would describe it as a complex flavored Thai dish that I enjoyed (a little bit heavy on the onions though). 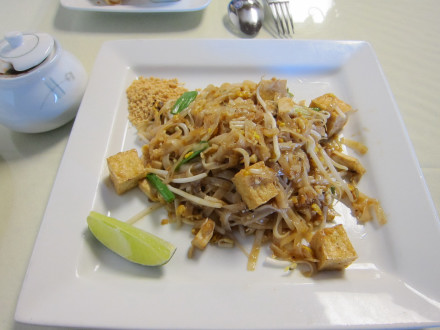 Pad thai from the lunch menu

The Pad Thai was flavored with tamarind sauce, had the right amount of sweetness, and had noodles with the right consistency. In other words, it ranks high among the ones I have tried in Oklahoma City. I think there are more exotic dishes at the restaurant, but the pad thai is a solid dish that is filling, is easy to make more or less spicy by adding your own chiles, and which is made surprisingly good by adding your own lime and peanuts.

One bit of trivia that I learned is that the pad thai and fried rice are the only two dishes at Tana Thai that are not cooked with garlic, so these make good lunches if you are worried about social situations when you go back to the office. 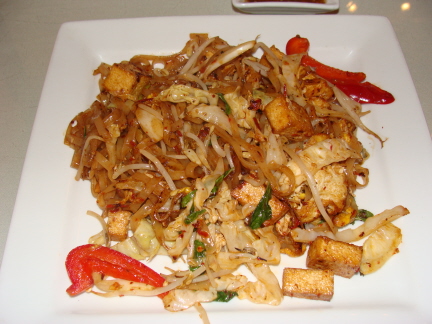 Pad Kee Mao is one of the noodle dishes available, and I was quite pleased with this one. The basil gave it a great flavor, and the tofu I ordered with it was crispy and very good. Noodle dishes come with beef, shrimp, or chicken, but the chicken and tofu are the least expensive choices. One thing I liked about this dish was that the spice level was just about right (I think I ordered it as one and a half stars), but I also asked for fish sauce with chiles on the side to make it spicier (this also made it more flavorful). 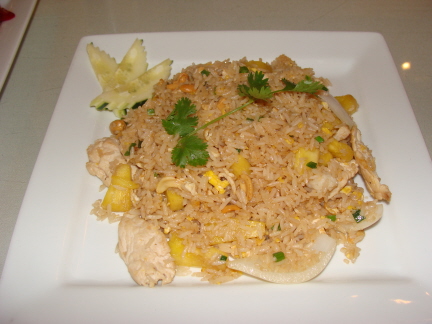 The Pineapple Fried Rice was also very flavorful, in fact much more so than at the majority of OKC’s Thai restaurants. I ate a few bites of the one shown in the photo, but it was good enough that I would not hesitate to order it as a dinner. The default version comes with shrimp, and this is probably what I would order since the chicken included in the one pictured was rather bland.

Drinks
The Thai Tea (served with ice) is good, and helps a lot if you get something on the spicy side.

Lunch Menu
The lunch menu is particularly good for giving you a good meal at a good price. During the summer of 2016 I made a comparison of several Thai restaurants in OKC, and found Tana Thai to be the best “bang for the buck.”

Recommendations
Overall I would say that the green curry is really a standout dish at Tana Thai, but the basil stir fried dishes and pad thai are some others that I think the restaurant really does well.

Ginger stir fried items seem too sweet to me, but I still like the complex Thai flavors they have. I would probably also put the panang curry in this category.

Ordering food at the right spiciness level has been a real challenge. I always thought they had a three star scale, and one and a half stars was usually about right for me. In 2020 I found out that it actually goes up to five stars, with the top two being classified as “Thai spicy.” I ordered a meal with three stars under the “new” system and found out it was as spicy as the three star level used to be, so for me a one and a half star to two star level is still about right. I think it is better to err on the conservative side and ask for some spicy nam pla fish sauce on the side in case you want it a little hotter. 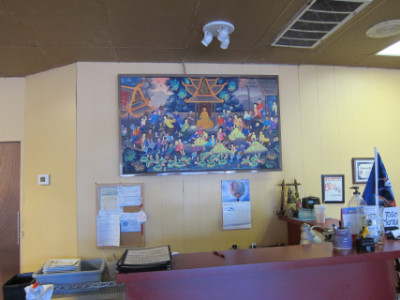 It is hard not to like Thai food, and it is hard not to feel at home in this small family-run business. I think it is a big plus that all food at Tana Thai is cooked by the owners, so the food quality and style can be assured. 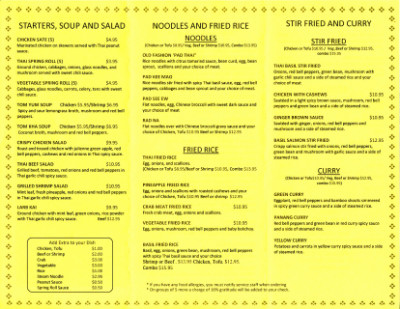 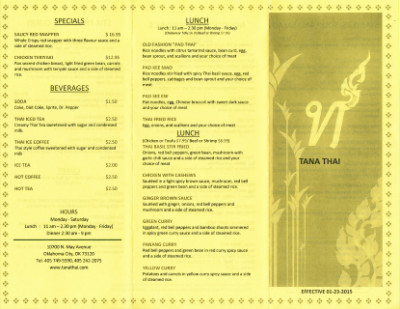