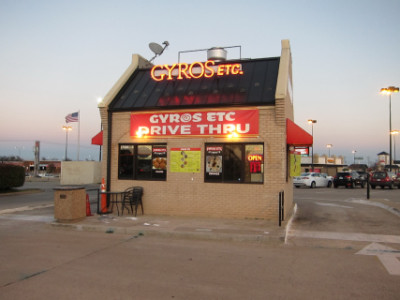 To say Gyros Etc. is small would be an understatement, and in fact it is not really a restaurant but a take-out place. The address is on Northwest Expressway, but it actually faces Rockwell (and is located behind the Chick-fil-A and Starbucks).

Orders are taken at the window on the right side of the building, and the pick-up window is on the left. The menu is pretty small, as might be expected from a building with such limited space. It seems, though, that what is served are the items they can do very well (although I am not sure the plural “they” is correct, since this seems to be a one-man operation).

When I went in 2020 I found several new items posted on their outside menu board including some that are now among my favorites. They still do not have an extensive menu, or even a large one, but I think what they have is good. 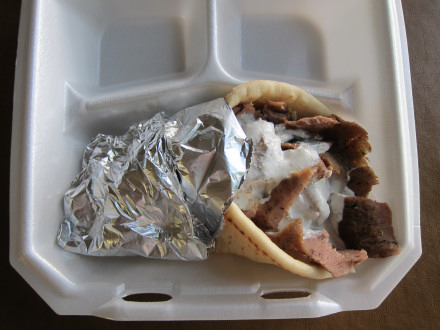 I thought the Gyros Sandwich was good quality, flavorful, and fresh. The pita was very fresh, and the sauce was especially good. The price is also good except for the fact that I need a side dish to go with the sandwiches here in order to feel full. 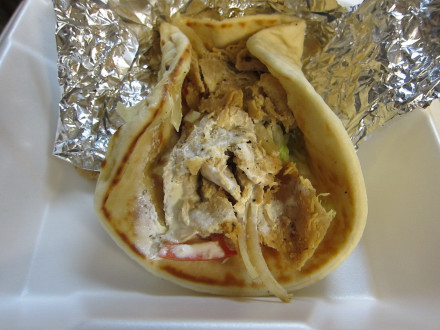 The Chicken Shawerma was one of the “new” dishes and I thought it was excellent (perhaps better than the gyros which I would call “very good”). This was a mixture of white and dark meat with the same excellent sauce that is on the gyros. It also has the same excellent pita. Its shortcoming is also the same as the gyros, which is that I did not find it quite filling enough to be a meal. 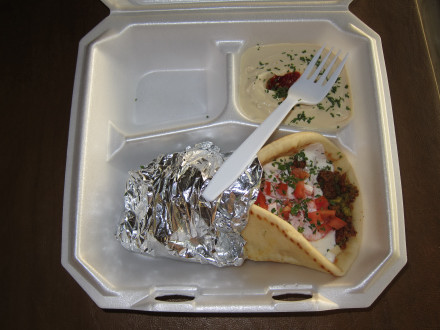 Some reviews on the Internet had led me to believe that I might find remarkable Falafel here. I would not say the reviews were inaccurate, but I would say that it did not seem any more remarkable than two or three other falafel sandwiches I have tried in the city. The falafel was broken up into pieces instead of being served in balls, and I thought this may have diminished the flavor a little (and a large proportion of it seemed to be the fried outer crust). I liked the sauce and the pita, and overall the sandwich was very good (but I would not necessarily say it is the best in OKC).

I got a side order of Hummus which came with a spicy salsa in the middle (this was quite a different presentation than I normally see). I liked this dish, but not as much as some of the more “traditional” ones I get at other restaurants. 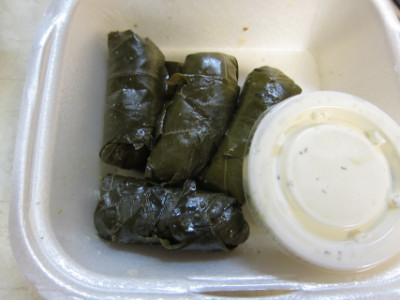 One of my favorite Middle Eastern side dishes is Grape Leaves when it is done right, but not a lot of restaurants seem to do it right. They do at Gyros Etc., though, which made me very pleasantly surprised (because I was not that enamored with the falafel or the hummus). Some places serve leaves that are too tough and have a vinegar flavor to them, but this is what was lacking here and was the reason I liked them. The filling inside was also very good, but I think almost every restaurant gets this part of it correct. 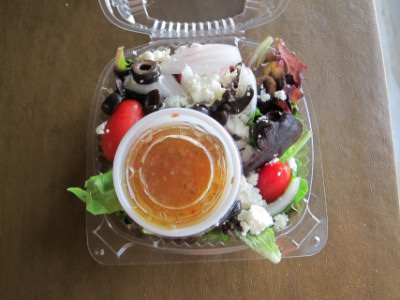 The Greek Salad had what I thought was an average tasting salad and a much better than average dressing.

Recommendations
The shortcoming of Gyros Etc. is that they only have drive-through service, so it is somewhat hard to compare it to a “regular” restaurant. I think Gyros Etc. makes up for the inconvenience somewhat by charging relatively low prices, but I still would prefer to go somewhere with sit-down service if I had a choice.

One point I would make about Gyros Etc. is that very few places have a pita or sauce that is as good as the ones here. All of their main dishes are sandwiches, so naturally it is important to have good pita and a good sauce.

The grape leaves were an unexpected find here, and I know not a lot of people are a fan of this dish but perhaps they have not found any as good as the ones here (and I have found very few that are as good).

There are a number of good gyros sandwiches in Oklahoma City so I would not say necessarily to make a special trip to Gyros Etc. for one, but I certainly was not disappointed by the one here.