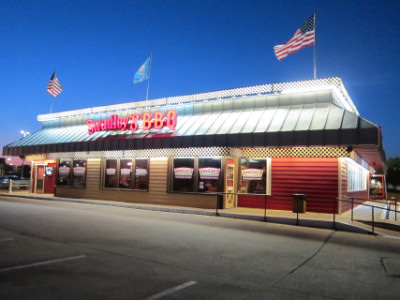 Swadley’s has expanded recently, and now the locations include Mustang, El Reno, and this one in front of Quail Springs Mall in far north Oklahoma City.  I have been a frequent visitor to the original location in Bethany, and my expectation was that the Memorial Road restaurant would largely reinforce my previous experiences (and this largely turned out to be the case).  Although I like to write reviews of each restaurant based on its own merits, I know that the meat for all Swadley’s restaurants is cooked in a central location, and there is quite a bit of continuity from one location to the others.

I have come to expect a certain level of inconsistency at the Bethany Swadley’s, as is the case with almost all barbecue restaurants (especially the chains).  Swadley’s is good enough that I never feel that I have a bad meal, but I feel that certain details are inconsistent.  At times some of the meats are dry, the vegetables are off, etc., but fortunately this is the exception rather than the rule. 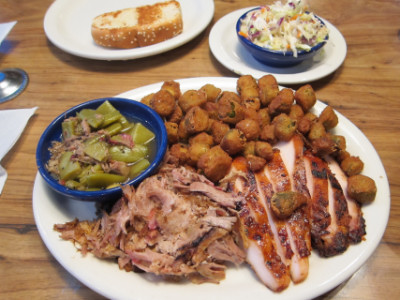 At the Memorial Road restaurant I ordered a two-meat platter with Pulled Pork and Chicken (meats that are normally good at the Bethany restaurant and that were good here).  In fact, the chicken seemed better than usual, while the pulled pork was as good as usual.  Both were moist and flavorful (but I thought the pork had a better flavor).

On subsequent visits I have ordered the Turkey and the chicken. The turkey was very good, but the chicken was not up to its usual standard (as defined by my visits to the Bethany location). This was significant because it was a takeout order that I got when all the restaurant dining rooms were closed because of the Corona virus. I do not think the food I got on this visit was representative of what they normally serve, but I do think that much of the decline in food quality was because of the distance I went before eating the meal (rather than having it fresh as is the case when you dine in).

Side Dishes
I have found many “inconsistencies” with the vegetables at the various Swadley locations. The Okra here was far better than I have experienced at the Bethany restaurant until I got a takeout order (which was at the low end of the quality scale by the time I got it home). A disclaimer, though, is that even in the restaurant I eat the okra first because it cools off and loses its freshness quite quickly, and it was really a mistake on my part to think I should order this as a carry-out.

The Green Beans here were noticeably spicy, and I just did not care for them as much as at the Bethany location.

The Cole Slaw was better than in Bethany on one visit and on another it seemed too sweet (not the way they usually make it at any of the locations).

The Sweet Beans were really good, as they almost always are at the Bethany restaurant.

I think each Swadley’s restaurant has its own vegetable chef(s), and this accounts for the main variation between restaurants since the meats are largely the same everywhere. Prior to about 2017 I would have said this location had better vegetables than the Bethany restaurant, but Bethany has since upped its game and the vegetables there are quite good now.

Recommendations
My experience over time has been that the ribs, pulled pork, chicken, and turkey are probably the best meats, but I would say really the first two.  These are the same meats I would recommend from almost all the city’s barbecue restaurants (except that most others do not have turkey as good as at Swadley’s).  Swadley’s also has a larger choice of meats than at most restaurants, for those who want to try something different.

Over time I have gone from considering Swadley’s sauce as a negative to thinking it is OK (although not as good as at Billy Sims or some other restaurants).  The thick and juicy sauce is my preference at Swadley’s.

Like the Bethany restaurant, the Memorial Road Swadley’s has good service and a comfortable “family style” dining room.  This sets it apart from many other barbecue restaurants, and is one of the reasons I really like Swadley’s.  I think if you get the ribs, pulled pork, or some of the other meats (depending on your taste) you will be getting a real taste of Oklahoma barbecue.

In recommending Swadley’s I do put some emphasis on side dishes, the comfortable setting, the service, the ice cream machine, and even the tea. I think some restaurants possibly have some meats that are better, but to my taste the differences have been slight and many times I think Swadley’s is just as good. My review of the Bethany restaurant has the complete list of meats and other items I have tried (and I think the food here is very similar to what they serve in Bethany).