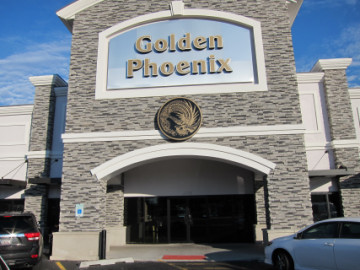 Golden Phoenix (Kim Phung in Vietnamese) became aptly named when it arose out of a fire that occurred in 2011, and was reborn as a more upscale and arguably better restaurant. Both before and after the fire it has operated as a dual restaurant in a single building–there is an authentic menu for Vietnamese food as well as one for Chinese food, each of which has its own chefs. The menu is written in English, Chinese, and Vietnamese and is separated into the categories and styles of food served. It does not make an obvious division, though, between the dishes that come from China or Vietnam.

The Chinese food is Cantonese style, and reflects the cuisine served in Hong Kong except for the fact that they do not serve dim sum. The Vietnamese side of the menu is the one I initially found to be the most interesting, and before the fire I had designated Golden Phoenix as the best Vietnamese restaurant I had found in Oklahoma. After the fire I have tried several Chinese dishes, and have found them to be excellent as well. As it stands, both Vietnamese and Chinese food are among my favorite items at Golden Phoenix. 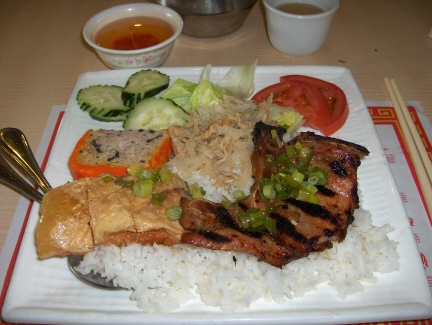 Some of my favorite items at Golden Phoenix have come from the Vietnamese menu, but both of the ones pictured are ones I ordered before the fire occurred. One was a Pork Chop recommended by the waiter as one of his favorites, and it turned out to be one of my favorites as well. This came with tender meat, but the flavoring was so good that this is what made it so memorable. Most of the meats at Golden Phoenix have MSG, but the pork chop “didn’t have much,” and I was able to eat it with no ill effects. I really think this was one of the best Vietnamese dishes I have had in OKC.

I do not know where this dish is located on the new menu (or the old one, for that matter, since I was just following the waiter’s suggestion). There are several pork chops listed in the section labeled “Broken Rice Platters” with different side dishes, but I cannot match any of them to the one pictured. I would recommend ordering any one of them from the menu or that the staff recommends, and although the side dishes will vary the pork chop itself should be as much of a sublime experience as it was for me. 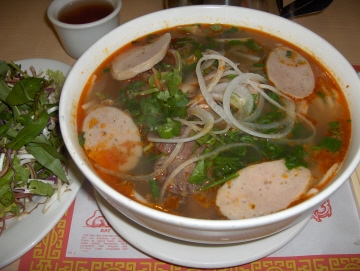 Bún Bò Huê is a popular soup in Vietnam, but Golden Phoenix is the one place where I was able to find an authentic version of it. This is number 214 on the menu in the “Rice Vermicelli Noodle” section.

The spicy soup had several types of meat and meat substitutes (such as congealed pig blood) that I probably would not normally eat, but I found the flavor to be good and overall I really enjoyed it. This was a deliciously flavored soup cooked with beef bones and lemongrass for flavor, and I found it to be surprisingly good. At least from the description of this dish I have found on the Internet, I think the one at Golden Phoenix was about as authentic as is be found in the U.S. I have had other versions of this soup in OKC, but the one I had at Golden Phoenix was the most flavorful (either in spite of or because of the blood balls).

The current menu lists this dish as “Hue style spicy beef noodle soup with beef, pork, balony and thick round rice noodle.” Absent from this is any mention of the blood balls, so perhaps this is something that has now been dropped. With or without the blood balls, though, I think the excellent flavor of this dish will remain. 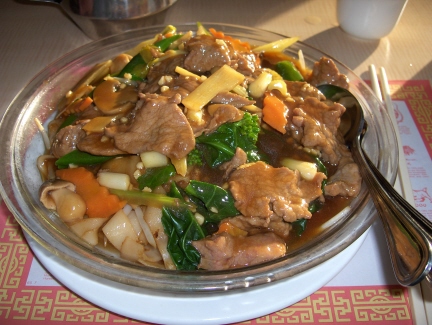 Flat noodles with beef and vegetables

The Chinese items available before the fire are still on the menu, including Beef Flat Noodles. This was a delicious dish with a large assortment of vegetables mixed in with tender sliced beef. There are so many noodle dishes served I think it will take some experimentation to find the best ones, but I was happy with the one I had.

Pan Fried Noodles were recommended as an authentic dish from the Chinese chef’s home region of Guangdong, and consisted of a wreath of crispy noodles around the edge that resembled a bird’s nest with the customer’s choice of meats and vegetables on top. Mine had a light brown sauce, and was thoroughly enjoyable. This one had a larger portion of noodles than others served in Oklahoma City, but they did not scrimp on the vegetables. It would not be advisable to attend a business meeting after eating this delicacy, however, since a heavy garlic flavoring is a key component to its essence. 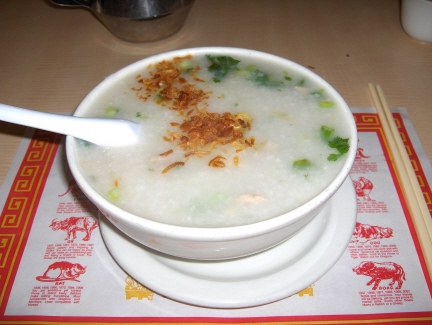 Congee, a traditional Chinese dish of rice pudding, makes a good breakfast or appetizer. Even though it comes with fish, chicken, pork, or other types of filler and flavoring, it is not generally considered a dish Chinese like to eat exclusively for a meal except for breakfast. Knowing that I do not generally expect a whole lot out of a bowl of congee, though, I thought the one here was very good. Grand House, across the street from this restaurant, is the only other place I know in town that serves congee (Grand House only has it on weekends and when dim sum is served), but even with a lack of competition in town I thought the rice pudding at Golden Phoenix compared favorably with ones I have tried in other cities. 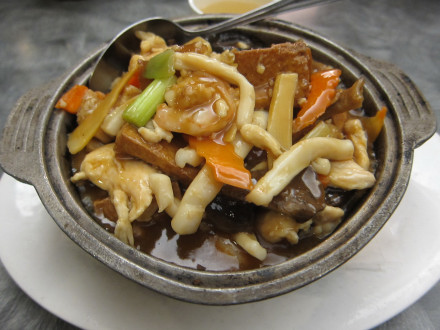 Several Chinese hot pot dishes are available such as the Bean Curd with Assorted Meat Hot Pot. This is a dish I ordered at night shortly before closing time, and they warned me that some of the meats could not be cooked that late in the evening but it did include several varieties of seafood. Some of the seafood was not as flavorful as I have had at other restaurants, and without the other meat this was a disappointment to me. Despite its apparent shortcomings near closing time, though, it still had good sauce, tofu, vegetables, etc..

The Vegetable and Bean Curd Hot Pot is one that I ordered at a “normal” time, and was very good with tofu, vegetables, and sauce. I thought it could have used some ginger, though. It contained more shitake mushrooms than I expected, and probably as a result of this was somewhat pricey for a vegetable dish.

Steamed Rice Dishes
One of the best dishes I have tried here was the Curry Chicken on Rice from the Steamed Rice section of the menu. It was not the kind of curry I was expecting, even from a Chinese style curry. The curry was a little sweet with a very complex and interesting flavor compared to most curries. I just had a few bites of it, but this was one of the best Chinese dishes I have tried in Oklahoma City. 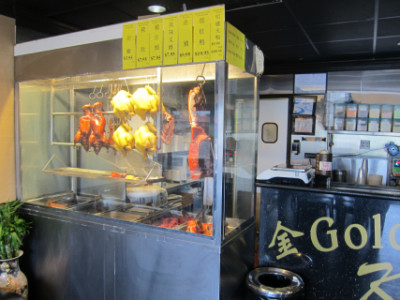 Golden Phoenix is probably the premier Chinese barbecue restaurant in Oklahoma City. First Chinese B-B-Q, a chain out of Dallas, was the original restaurant here, and when Golden Phoenix opened it seemed to be merely a name change with the new restaurant still being known for its meats. One of the most notable features of the restaurant is the array of hanging barbecued ducks, chickens, and other animals in a display case near the counter.

Chinese barbecue shares the technique of slow cooking with other barbecue traditions, but the meat can be anything from pork ribs to duck. The smallest portions of barbecued meat served at the restaurant are a half duck or chicken, except for some steamed rice dishes that come with individual portions of duck and other meats. 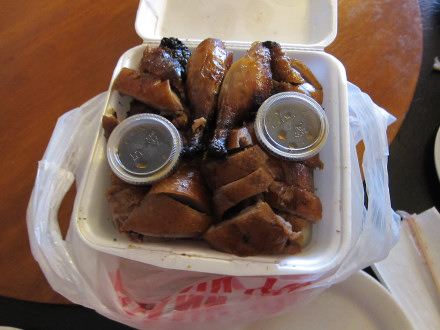 I recently shared a takeout order of Roast Duck with some friends, and it reaffirmed the conventional wisdom that barbecued meats are one of the items Golden Phoenix does best. To me the flavor and quality were on par with duck I have had at some fine dining restaurants.

In 2020 I shared some roast duck on Mother’s Day (also a takeout order) which was so good that I have to list this as an official Steve’s Food Blog tip. The roast duck is always good here, but on Mother’s Day they seem to make a special effort to give you the tenderest and most flavorful roast duck possible. For me this was one of the top three or four examples of roast duck I have ever experienced. (I was told that the roast duck is only available after 12:00 noon but I do not know if this is only on Mother’s Day or whether this is the case every day).

Tea
The original Golden Phoenix served jasmine tea made with loose leaves that was on the house. Now it is made with tea bags and they charge for it. This, along with a new dining room and a somewhat new menu, makes me think they changed the management after the restaurant reopened. In any case, the tea was one item that was better at the “old” restaurant.

Recommendations
I have found consistently good quality with both the Chinese and Vietnamese food, and for both they seem to serve the food as it would be done in Asia. The menu is very extensive, and at times it has been hard for me to decide what would be best to order. The staff is usually a big help if you have some idea of the type of food you would like.

Really my only disappointing experience here has been going late in the evening. They were down to somewhat of a skeleton crew, and the waiter had advised me that they did not have all the ingredients to make some of the dishes properly. I am not holding this against the restaurant because they did advise me, but I will know in the future that when they warn me not to order something that I should not expect the best result from it.

Another lesson I have learned is that many dishes that are quite good did not sound all that appetizing on the menu, so for many of us this requires a learning curve. At the same time some dishes that do not sound very good are really not something I or other people would particularly enjoy. There are plenty of “safe” dishes here (the barbecued meats are hard to beat), but this really is a great place to explore the menu if someone is so inclined. 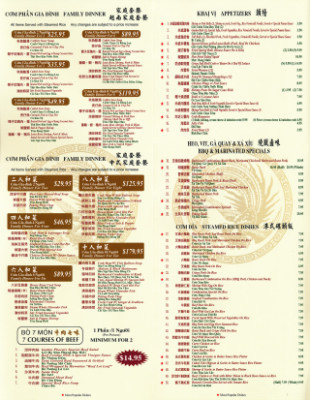 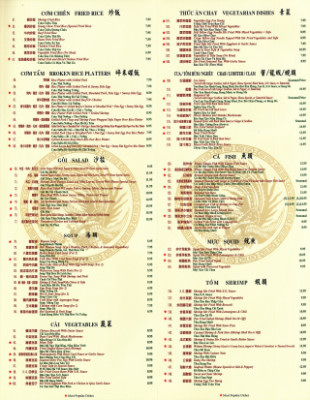 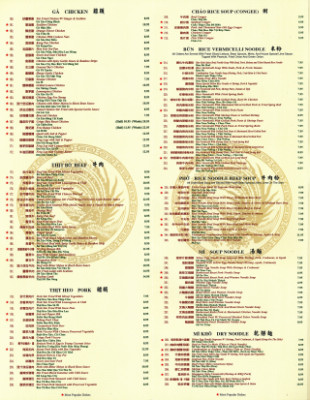 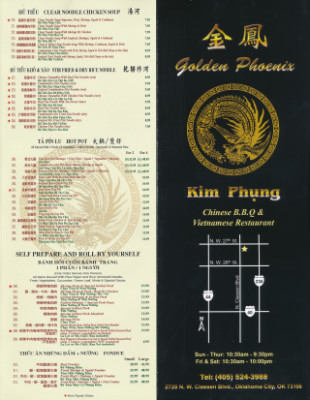