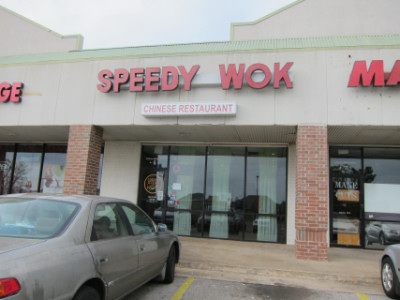 Speedy Wok is one of the small strip mall Chinese restaurants that have become quite popular by concentrating on take-out orders at cheap prices. Most of these “express” restaurants offer MSG-free food (including Speedy Wok), but Speedy Wok can be distinguished from some of the other restaurants by such features as a very ambitious menu and a more upscale dining area for those who wish to eat at the restaurant (the dining room was completely remodeled in early 2014).

The customer service has always been quite good, and they will be glad to try to customize your order as much as possible.

Speedy Wok does not attempt to offer the kind of authentic Chinese menu found in various restaurants near N.W. 23rd and Classen. Within the range of “Americanized” Chinese food, though, this seems to be one of the better restaurants. 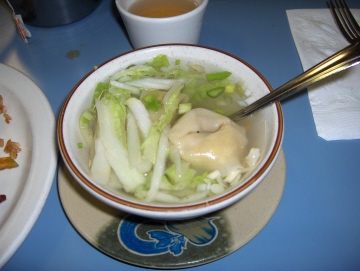 Wonton Soup has been one of my most frequently ordered items at Speedy Wok. A small bowl is available with many lunch and dinner plates (or a choice of egg drop or hot and sour). A large bowl can be served as a meal, though, and many times I have found this to be enough when I do not have a huge appetite. The best part is the very substantial amount of wontons that are included, although I have found the broth to be of variable quality over several visits (but most of the time it is very good).

The vegetables, though, are what sets the wonton soup apart from many others, and I think are mainly what makes it suitable to be a meal in itself. 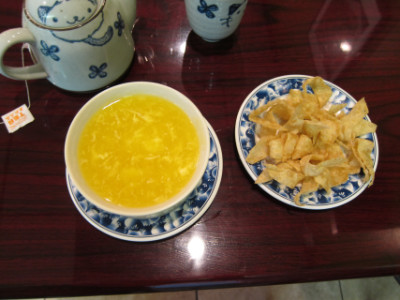 The Egg Drop Soup was perhaps a little richer and more flavorful than most, but still fell into the category of Americanized food (as opposed to the wonton soup which really had more of a Chinese flavor).

The Hot and Sour Soup was quite flavorful, and I almost gave it a five-star rating except for the fact that the red chiles really overpowered the other flavors. 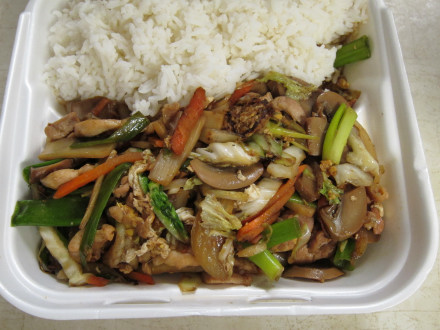 One of the best dishes I have found is the Mu Shu Chicken, a flavorful dish with good quality chicken. I liked the vegetables, which included green onions (as opposed to the white ones which I think some restaurants use just for filler). The sauce was very flavorful, and I thought this dish tasted very much like ones I would get in the Asian District. 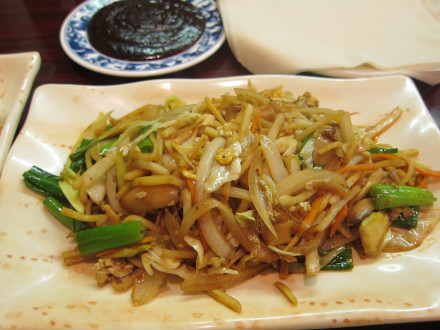 Vegetable Mu Shu is a good alternative to the meat versions by having the same sauce and “pancakes,” extra vegetables, and a lower price. I am not satisfied by a lot of vegetable dishes, but this is one I would plan to order again. 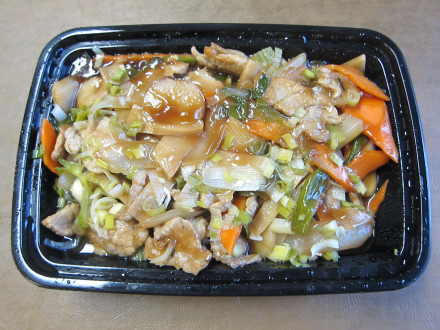 The Peking Pork is perhaps the best dish I have found at Speedy Wok. This is curious because it is in the “Platters” menu which are the least expensive items available. The explanation, though, is that it is in a smaller portion, and has nothing to do with the quality. In fact, the vegetables include bamboo shoots and water chestnuts (two of my favorite Chinese style vegetables). The pork in this dish was better than other pork dishes I have tried, and I think they use a different cut of meat than on the other dishes. The sauce had an excellent flavor and had a complexity that reminded me of the Chinese food in Denver and other large cities. Even the amount of food on this dish was enough for a full sized meal.

There are other dishes at Speedy Wok that have an Asian flavored sauce but the Peking Pork seems to be the best one in terms of meat quality and vegetables. 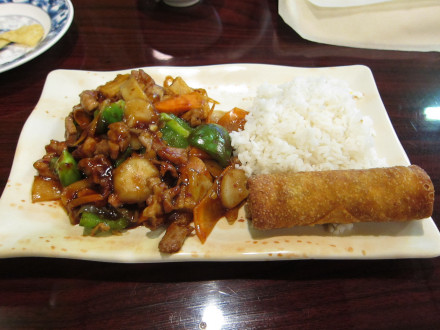 The Szechuan style dishes have generally been next on my list of the most satisfying ones, although I think it is a large step down from the mu shu dishes and Peking pork. The Szechuan Pork has had a sauce that I think has less of a Chinese flavor than the Peking sauce, but it is still good. The vegetables are very good with water chestnuts and some others that are Chinese style. The meat on this dish has been tough on several times I have tried it. Still, though, it is a good dish overall. 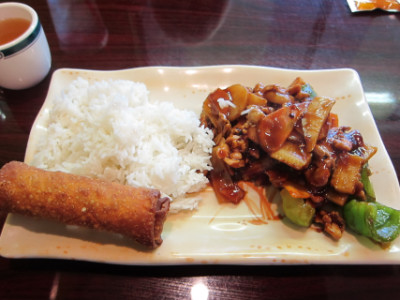 In my opinion, though, the Szechuan Chicken is an even better choice. The vegetables and sauce are very good as they are for the Szechuan pork, and I do not have any issues with the chicken on the texture or other factors. 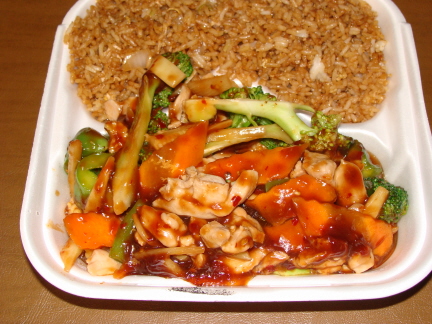 The Hunan Chicken was wrong for me in just about every way, and I would probably have to place it in the “Americanized gloppy” category. The chicken was good, but it went downhill form there. The vegetables were mostly the Americanized variety, with a lot of broccoli and bell peppers. The sauce was spicy beyond the point where it provided extra flavor, and instead it was just spicy with little else that I could taste. The sauce itself was good, though, and can be ordered less spicy (which I would recommend);. 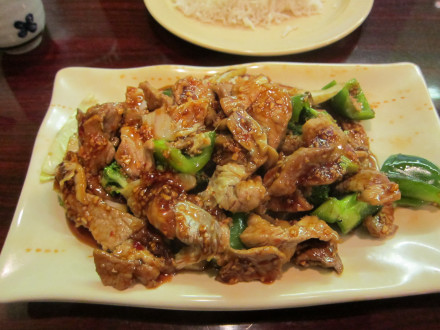 The Pork with Garlic Sauce is one of the dishes here with an authentic tasting sauce, but it is just that other elements of the dish were a letdown. The meat was tough and the vegetables were not very exciting. Like some of the other spicy dishes here I though it was too much on the spicy side. The chile did not balance the flavors but overwhelmed them. This is a case where I would ask them to tone down the heat if I ordered it again. 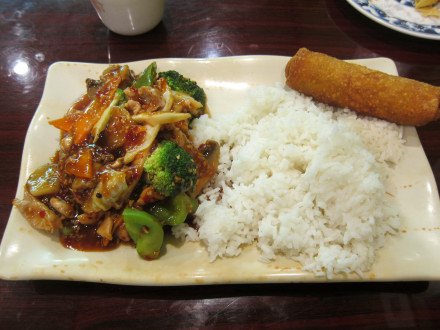 Chicken with Garlic Sauce is the dish I would be more likely to order again. The chicken at Speedy Wok has always been good and for some reason this dish was not as spicy. It also appears that this was a smaller order and I think I enjoyed it more because of the extra rice (which can be used to offset the spiciness of it). 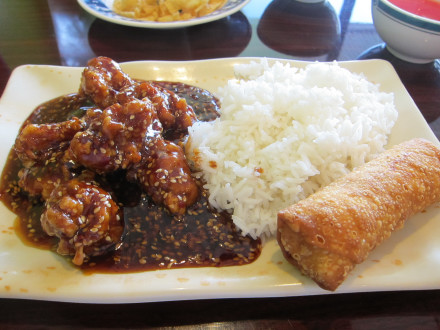 The Sesame Chicken is good but complicated. I have always found the chicken here to be good. The sauce was lackluster but not a detriment to the enjoyment of the dish. The dish is quite spicy unless you request otherwise (although you are warned with a red chile next to the menu item on the menu). The dish is not even on the “Chicken” section of the menu, but you have to look under the “Platters.” The last complication is that a picture on the wall showed the dish with broccoli, but they told me afterward that it does not come with broccoli unless you request it (although broccoli is not my favorite vegetable it would have been good to have something besides the meat). 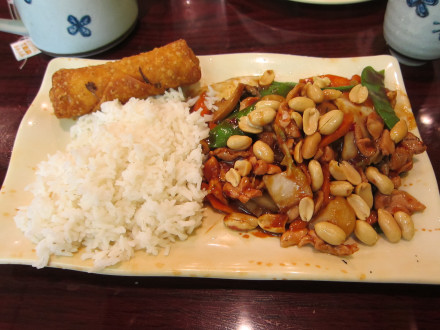 I ordered the Kung Pao Chicken in 2015 and my notes do not describe the sauce, but I would have noted if it were as good as Dot Wo or other restaurants where I particularly like the kung pao. On the vegetables I noted that it did not have enough water chestnuts although otherwise I thought they were pretty good. I have also found that chicken is one of the better meat choices here. 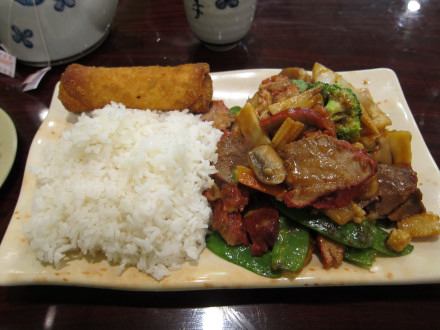 The BBQ Pork & Vegetables was another dish where I found the meat to be tough. I do not think this dish has a sauce but it did have a seasoning that was good. The vegetables came with the standard broccoli and other American style greens, but at my request they added some Chinese style vegetables at no extra charge. 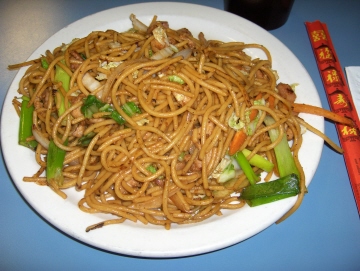 The Vegetable Lo Mein was good considering that this is something I rarely order. I found this one, though, to be flavorful and not too heavy on the cooking oil. The vegetables were fresh and this was an all around good meal (and pretty filling as well).

My attempt at ordering Bean Curd Country Style, normally one of my favorite dishes, also fell into the “letdown” category for me. The tofu was overcooked and the vegetables were somewhat unappealing, although the sauce was good. With Speedy Wok advertising “MSG Free Low Calorie Cooking Chinese Food,” the sauces are many times one of the better points of the restaurant.

The Cashew Chicken had a sweet sauce, and was not what I was expecting in this dish.

The Sweet and Sour Chicken was sweet as I expected it to be, but I would have to say that the dark meat chicken was so good that it almost offset the overly sweet taste.

A Summary
For me the best feature of Speedy Wok is the Chinese flavored sauce I have found with some of the dishes. Peking pork is the dish that combines everything I am seeking–good meat, a good selection of Chinese vegetables, etc. Runner up for “most authentic Chinese” would probably be the garlic and szechuan sauces (depending on the vegetables that came with them). I also thought the wonton soup had an authentic Chinese taste. The mu shu is very good but probably not an authentic Chinese dish.

The last time I was here the owners had stopped doing delivery (although you could still get it through the delivery companies). Their son had been doing the deliveries, but I believe he is the one who opened Babble in the same shopping center, so obviously he is now occupied with this. I do enjoy the dine-in, though, and the dining room here is much larger than the typical ones for restaurant who mostly do take-out.

This is a very pleasant neighborhood restaurant where I enjoy chatting with the owners and getting some good, cheap food. It is a bonus that I can say not everything on the menu is Americanized Chinese food (the owners will direct you to the type of food here that you would like) 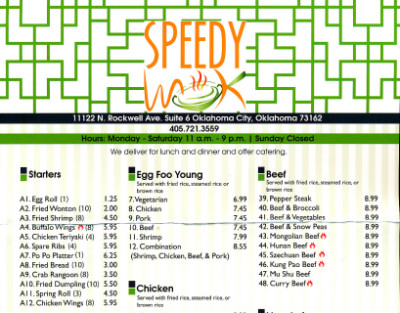 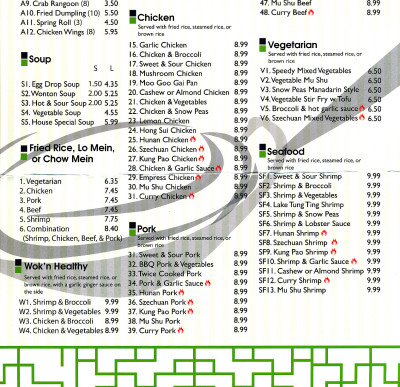 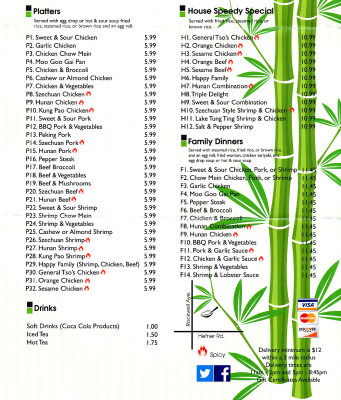