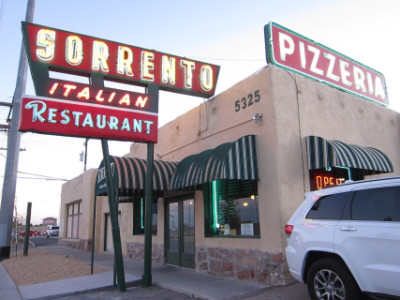 The one thing out-of-town visitors should know about Sorrento is that it is an old style, red checkered tablecloth type of Italian restaurant. I understand that it was started in 1951, and that it is now owned by the original owners’ daughter who carries on the tradition that people in northeast El Paso remember while growing up.

My own relatives used to take my family and I to Sorrento when we would come to visit, and along with Great American on Alabama and Leo’s (which used to be in the northeast), this is one of the few restaurants still operating which I can remember from the first few times I visited El Paso. 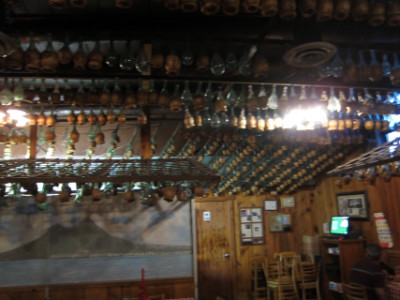 There is a collection of wine bottles hanging from the ceiling that I think was there from the time of my first visits here. To me this is one of the great pieces of restaurant nostalgia that is locked in my memory.

The restaurant continues the tradition people would expect by providing red checkered tablecloths, and by having a menu with all of their favorites, mainly pasta dishes. I have seen reviews on the Internet that indicate that the best dishes are the ones with seafood, but I have to say frankly that I have never tried these. I seem to be like many other people that I am pretty much stuck on the dishes I have always ordered.

I will say a little bit about the old style Italian restaurants such as this one. This is especially important to me since Sorrento is one of the few that I remember from the time I was growing up which is still open today. Based on the new Italian restaurants, which I really enjoy, I do not think the “red sauce, checkered tablecloth” restaurants are authentic. For one thing, many of the dishes at Sorrento and other old style restaurants are made with ground beef, and I do not think this is a staple of Italian cooking (I say this never having visited Italy, but I think this is a pretty safe statement to make).

For every Italian restaurant it seems that the main draw is its sauce which is made from a “family recipe.” This is probably true, even at the old style ones, but the new restaurants seem to have a lighter tasting sauce while ones such as Sorrento seem to be heavy on the herbs and spices. I think the only thing anyone can really judge is how they like the flavor. I like the sauces at the new restaurants better (such as Monteleone), but the one at Sorrento is still pretty good. At least the sauce here tastes home made, unlike the ones at some of the national chains.

Salads and Appetizers
The biggest negative I found on a recent visit was the Salad, which consisted of some iceberg lettuce with a garlic and vinegar sauce. This type of salad can be very good, but I thought the one at Sorrento was a big fail, especially since you have to pay extra for it. This is one area where I think a lot of people would appreciate an update to the restaurant’s traditional menu (I am not sure, but I think they also have some other types of salads on the menu which I have not tried–I am just saying that I think the house salad could be better).

Some people make much the same complaint about the garlic bread, but I think there is no reason to change something that has worked for over half a century, and to stay with nostalgia on this one. These are buns which have been split in half and covered with garlic butter. The trick, though, is that they were cooked just right to make them crispy around the edge but soft in the middle. 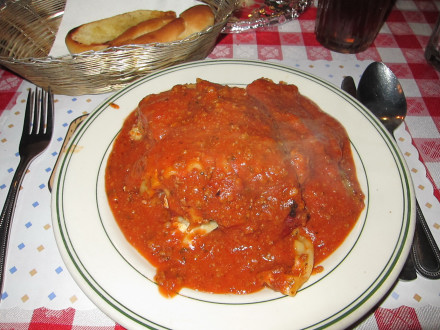 If I am able to make more visits to Sorrento I will mainly be working my way through the pasta dishes on the menu. I was able to order the Lasagna at a time when it worked out to make this selection, since the menu includes the warning that it takes 25 minutes to cook.

Probably its key is that it is baked with ricotta cheese, but the sauce is also very good (this is the part that contains the ground beef). I really do not order lasagna very often at any restaurant, but it is always good when I do, as it was here.

Pizza
I remember the Pizza as being very good, but I have not had any in a while. I think I have pretty much decided that this will be on the list for next time. 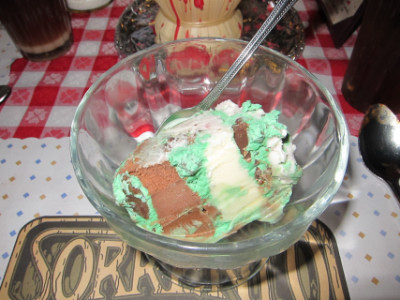 The Spumone used to be my favorite dessert here as well as the best I have tried anywhere–now it is number two on both counts. Monteleone’s has one that I thought was better, so it is now the best that I have tried (not that I have tried spumone at a lot of restaurants, but it has been a few). What causes the one at Sorrento to still be classified as one of my favorites is that it is house made (as are all of the desserts). I think they are using a traditional recipe, and they have all of the ingredients necessary to make this a special dish. This is like having ice cream at Baskin Robbins or one of the premium ice cream stores, but with a much better flavor combination than I find at many of the stores.

As far as the best dessert at Sorrento–I think it is the Tiramisu. My dining companions ordered it and I tried a sample, leading me to conclude that like the spumone, this is one of the best I have tried anywhere. It did not have the variety of flavors that the spumone had, but its flavor was excellent and was something I will remember for a while.

A Summary
The tried and true formula Sorrento uses is resonating with people, because the restaurant was almost completely full on a recent visit I made. For this to happen, it always has to be a combination of good food, reasonable prices, decent service (the service I got was more than decent), and feeling comfortable to come back.

The recipes here are what I would call old style Italian, but the food is fresh and prepared very well. Unlike some restaurants there was not such a large serving that I had to take some home, yet it was filling and I got a good dinner for the money.

There was a time when I thought the quality of the food at Sorrento went downhill, but this is now many years in the past. It is now like I remember it from the old days.

I do not really have any tips about what to order, because I am re-exploring the menu myself and finding out what I like now as opposed to what I liked in the “old days.” I will probably order the lasagna again, but I would also like to try some other items on the menu.