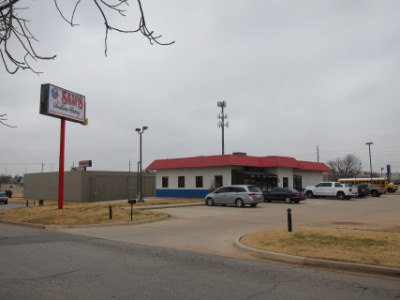 Sam’s Southern Eatery is a rapidly expanding chain of Cajun style restaurants based in Shreveport, Louisiana, and which has recently opened several locations in Oklahoma with more planned. My first visit to this location and one in Shreveport were within a two week period, and as a result I was able to compare the recently opened location in Oklahoma City with a well established one.

I believe this location was still working out some of the details when I went, and the fact that the staff admitted this to me makes me more anxious to return. Probably a restaurant’s honesty and transparency is the most important factor to me other than the food itself, and the staff here left a very good impression on me.

As for the food, I didn’t think it matched what I got in Shreveport, but certain items were nevertheless very good. In case you wish to have a review in a nutshell, I will just say to do yourself a favor and order the red beans and rice (it is worth going just for this). 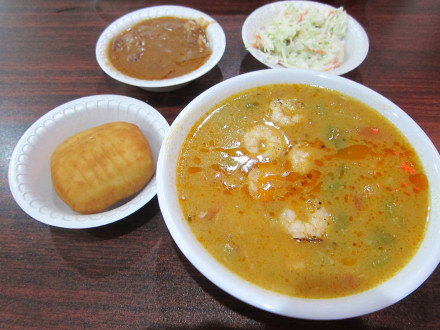 Mostly wanting to know how the food here compared to Louisiana, I ordered a bowl of Gumbo. Whether it is very authentic or not, I thought it was flavorful. The shrimp tasted as if it had been frozen and there were not many vegetables, but still it was enjoyable. The most striking thing I thought was noticeable was that the broth had a very light color. Overall the gumbo was fine but not exceptional.

I thought the Red Beans and Rice was exceptional, and the recipe was successfully transported from Louisiana. It had a good smoky flavor, and I think this is the best item at the restaurant (that I have tried, at least).

The Cole Slaw was fine and better than at many of OKC’s barbecue restaurants, with the cabbage being noticeably fresh. The flavor was strong on the vinegar but not too much so.

The Fried Roll tasted very good but after the meal was the only thing I was tasting, so I probably do not want to repeat this experience (I think they offer a choice of either the roll or cornbread, and if so I will take the cornbread next time).

Other Comments
Each Sam’s restaurant is individually owned, and the food varies from one location to the next. The chain does give them the recipes and I believe supplies the ingredients (so that the food quality is constant). In comparing the Shreveport and Oklahoma City locations I found that the recipes for the gumbo were different (although the quality of the shrimp used was the same), the Shreveport restaurant ran out of red beans and rice when I was there (the Oklahoma City restaurant had plenty of everything despite being packed with customers), and each restaurant has its own “extras” (the Shreveport restaurant had home made cake for dessert).

The biggest seller at Sam’s is the shrimp. I did not try the fried shrimp at this restaurant, although the shrimp in the gumbo was equivalent to the one in Shreveport. The fried shrimp comes in very large pieces (my dining companion and I shared an order of 8 shrimp in Shreveport and we really thought 6 would be enough for the both of us).

Almost everything at the Oklahoma City location was good, but I think the lesson with the fried roll was that you shouldn’t fry something that is already good before you fry it (the Shreveport restaurant didn’t serve this item, perhaps for a good reason).

Cuisine: Cajun
Cost: $$
Hours: Open Daily
Accessible: Yes
Smoking: No smoking
Alcohol: I do not believe so, but I’m not sure 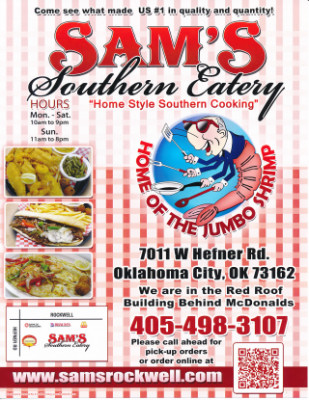 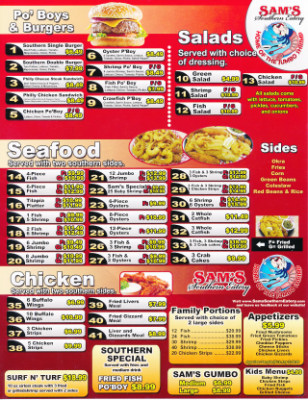