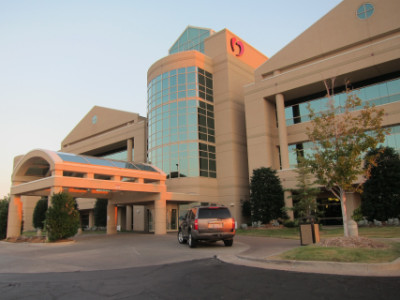 I am willing to look in unconventional places for good food, and a number of on-line reviews led me to try the cafeteria in the Heart Hospital in far north Oklahoma City (located just east of Mercy Hospital).

I had once done a pretty thorough sampling of the hospital food in El Paso, Texas, finding at the time that only Sierra Hospital made my “return visit” list (and this was because of their Mexican food).  Hospital cafeterias are a good way to save money, and if you can find good food to go along with it this can be a good choice. 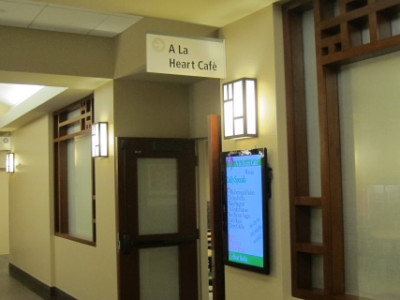 A La Heart Cafe is located just inside the entrance

The short answer about A La Heart Cafe is that there is reason for the good reviews. Not only did I like the food, but there is a very good selection of items. Much of it is geared toward hospital employees who need to eat on the run, but many of the items are more on the gourmet side (although already prepared and ready to eat when you get there).

A La Heart has a changeable menu, with certain days of the week being “Mexican,” “Italian,” or “Asian” days. The soups, sandwiches, and salads, though, seem to be constant, and do not change from day to day. A La Heart publishes their daily menu on the Internet.

Some of my family has tried the Mexican food from the cafe on the “Mexican” day, and advised me against ordering it (mostly knowing that I would be disappointed after having the El Paso version).

I will also make the disclosure that I purposely tried A La Heart on a day when they served chicken pot pie, knowing that this would likely be one of my favorite items here. 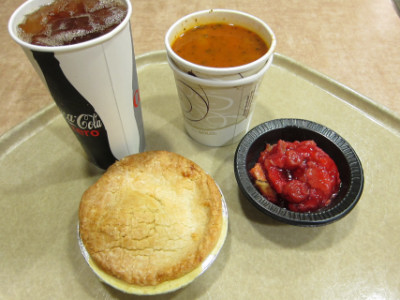 The Chicken Pot Pie was not only good, but I would say it exceeded my expectations. Visually it was similar to the frozen pot pies you get at the grocery store, but the one here was freshly made, full of flavor, and was not loaded with salt. The good thing about this is that it was “normal food” (and not, as I had feared, something devoid of flavor so as to be “healthy”). The only thing this was missing was the “processed” flavor that you get in the store-bought pot pies, and to me this is a very good thing. 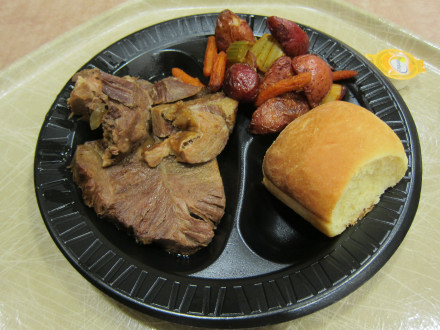 I did not try the Pot Roast myself, but I was told it was excellent, and should be on the “best items” list (and it is so listed). If you are expecting meat and vegetables mixed together, be advised that they sell the potatoes and vegetables separately (the entire serving with vegetables was about $5). 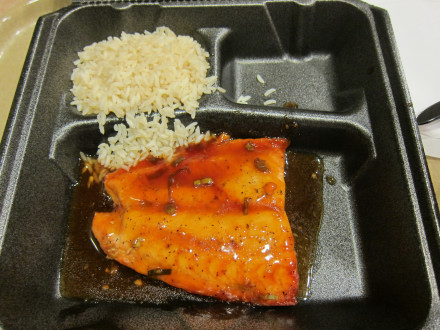 The Honey Soy Salmon is not like anything I have seen before in hospital food, but it shows why this is one of the better hospital cafeterias. The salmon was very good, although more white than red. The sauce was even better, reminding me of the teriyaki sauce they serve in Japanese restaurants. 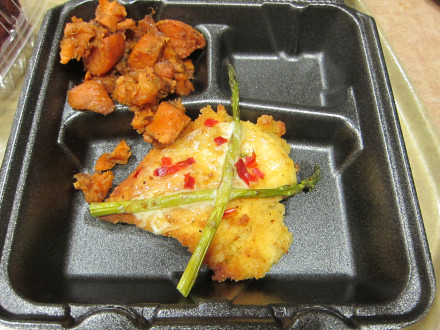 Chicken with asparagus and sweet potatoes

The Chicken with Asparagus in reality was the best dish I have tried at A La Heart, although for the time being I am still not giving up the chicken pot pies whenever I can get them. The chicken with asparagus, though, provides such a blend of excellent flavors it is hard to resist (everything was fresh, and it was even topped with a non-yellow cheese which is always a good thing).

The sweet potatoes were a side dish (always sold separately), but I don’t think I have ever had a meat and vegetable combination that was over five dollars (unless you get more than one side dish).

Minestrone Soup
The Minestrone Soup was excellent, and I liked the fact that it was a little on the spicy side (it’s better to have too much flavor than to have too little). It seemed to be freshly made and healthy without tasting like “hospital food” that was prepared for patients on a special diet.

15 Bean Soup
The 15 Bean Soup was also quite good, but like the minestrone only comes in one size (about double what I consider as a normal soup serving). Again, this does not taste like typical hospital food.

Side Dishes
I am just beginning to compile a list of items I have tried, but the Mashed Potatoes were quite good. I would rate them as having an excellent flavor and texture. The only thing that was somewhat of a miss was the gravy (brown gravy) that I thought could have been more flavorful.

The Peas and Carrots did not have much salt or flavor. The first part I liked, because I can add my own salt if needed (but it really was not needed). The flavor was actually all right, just not as robust as some that are probably less healthy (I am just making an assumption here).

Green Beans had a good texture and were not too crunchy. I give them a good rating for the flavor.

The Sweet Potatoes were lacking some of the condiments found in most cafeterias that make them taste better but probably less healthy. I am happy with the food at A La Heart, including the sweet potatoes, but diners need to keep in mind that the food is purposely made more healthy with a slight loss of some of the flavors normally found in restaurant food.

Salads
A La Heart has a salad bar in which you take whatever you want, and they charge you according to how much it weighs. I wasn’t sure how expensive this would turn out to be, but it was reasonably priced, and I would not hesitate to “load up”

Not all of the salad items were very memorable, but I did like the Three Bean Salad very much.

Desserts
The Cobbler I ordered was not one of the most special ones I have ever tried, but it was fine, and like the other items, did not break the bank.

The Chocolate Cake was also good, but of course is not like the one you will get at La Baguette. It is also a lot cheaper than La Baguette (and makes a satisfying dessert).

Recommendations
If you are coming here strictly for the food (and you will likely be in good company), check their on-line menu.  The main items change daily, and my family has found that some are better than others.  Although it is a cafeteria, some of the items (such as the chicken pot pie) really exceed what you would think you would get in a cafeteria, and are more like restaurant food.

I was not sure if they would run out of the “special items” quickly, but apparently they prepare an adequate supply, and keep serving the food until closing time (which I think is 10:00 PM).

One note about the rating is that it is somewhat of an average between some dishes which are home runs and others which are somewhat lackluster. The problem is that each day the menu is very limited, and it changes frequently (for instance, the chicken pot pie seems to be served only once or twice a month). The best bet is to check the on line menu before you go.