Warning: The magic method Gallery_Img::__wakeup() must have public visibility in /home/foodblog/public_html/wp-content/plugins/gallery-images/gallery-images.php on line 97
 Route 66 at the Texas-Oklahoma Border | Steve's Food Blog
Skip to primary content


I believe that something almost as important as the meals I enjoy and write about are the journeys to get to these various places (and in some cases this really seems to be even more important).

One such journey which has interested me since the days of my youth is the iconic one along Route 66 (U.S. Highway 66) which was gradually replaced by Interstate 40. My family made frequent trips from Oklahoma City to New Mexico to visit relatives as well enjoy the cooler summer temperatures in the mountains, and as a result I witnessed much of the transformation of this roadway to the way it is at present.

The sections of Route 66 which still exist have become quite an attraction for tourists, as well as the entire experience of 1950’s and 1960’s era travel which a growing number of entrepreneurs are savvy enough to try to replicate for visitors today.

I can say with a high degree of certainty that the original sections of Route 66 which still exist are not there by design, but just happened to survive due to various circumstances. I found a couple of examples of this on a recent trip on Interstate 40 at the Texas-Oklahoma border. Through some old maps that I have as well as ones I found on the Internet I have developed somewhat of a timeline for the history of this section of Route 66, but I also have memories of it from traveling in my parents’ station wagon on many of our family trips.

From Exit 176 eastbound in Wheeler Co., TX into Texola, OK 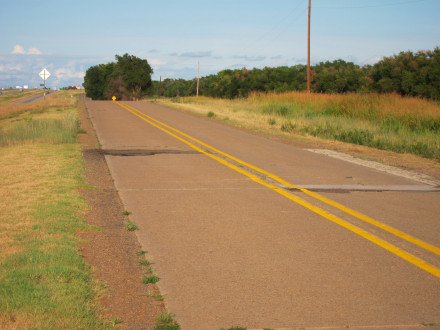 When I saw this section of road I suspected immediately that it was an original segment of Route 66, and a check of the old maps has confirmed that this is the case. This particular section of road is accessible if you take the Texola exit from Interstate 40 eastbound at Exit 176 in Texas.

This was the original Route 66 from the 1930’s and 1940’s, and now seems far too narrow to have functioned as a two-lane high speed highway, although I know that this was the case. Probably the biggest difference in that time period had to do with the size and number of trucks operating on the highway, but even for cars this seems like a narrow road.

A 1961 map of Wheeler County from the Texas Highway Department shows that this had become the eastbound portion of a now 4-lane divided highway. It is interesting that they developed this portion of the road to a 4-lane version of Highway 66 while the Interstate highway is in development (and was open in 1972 for the entire length of Wheeler County except for the loop around the city of Shamrock which was under construction at that time).

What seemed to save this portion of the roadway was the fact that a Texas law said any property owner along a roadway (including US highways) could have access to the roadway. When limited access highways were developed, including Interstate highways, they had to build frontage roads to provide the property owners’ access mandated by state law. With Texas being an ever so frugal and conservative state, they decided that the existing roadway (the old Route 66) would make an excellent frontage road. In Shamrock, where the new Interstate highway bypassed the city, the old Highway 66 is still in its form as it was in the 1960’s (a four-lane divided highway) now known as Business Route 40.

The farthest west town in Oklahoma along the old Route 66 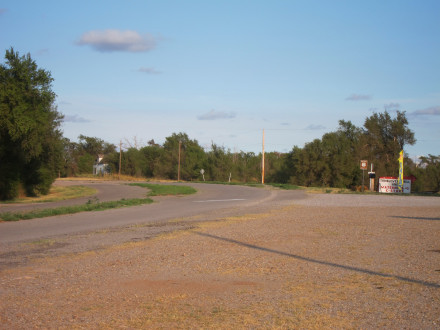 According the the old highway maps which are available for download at the ODOT web site, this section of Route 66 in Oklahoma was widened to four lanes in 1958, and served as the main highway until 1976 when this section of Interstate 40 was completed. Much of the existing Route 66 in Oklahoma today is this same type of four-lane highway, particularly through cities and towns. Because the Interstate largely did not go through the center of towns in western Oklahoma, this left large portions of Route 66 intact and this is another very good place to explore the old road. 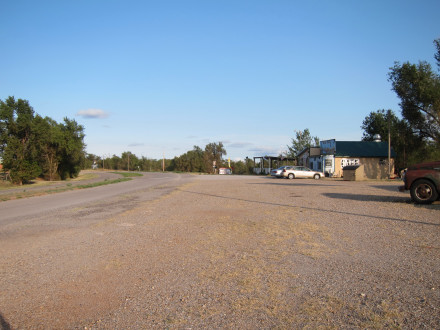 Businesses along Route 66 in Texola

Texola has a few businesses along Route 66 which seem to cater mainly to tourists. I was there late in the day and probably after their closing time, but I did see a few cars parked in front (I think they probably get more business during the day).

Texola is a good example of much of the 1960’s version of Route 66, but the south frontage road of Interstate 40 in Wheeler County Texas was of great interest to me as being an original section of the highway from the 1940’s and earlier.