U.S. Highway 66 extended from Chicago to Los Angeles, and in its heyday was one of the busiest highways in the country. With a renewed interest by many in exploring “The Mother Road,” restaurants along the historic route are increasingly acknowledging the fact that interest in Route 66 can be a factor in bringing customers to them. I thought it would be interesting to make a list of places along the roadway that I have highlighted in my blog as well as on my earlier web sites. I do not purposely go to restaurants because they are on Route 66, but I find that this is where many of the places are located that have interesting food.

U.S. Highway 66 was decommissioned on June 27, 1985, and no longer exists as an officially designated highway. There are many signs showing the route, though, and state and local governments have done their part in commemorating the historic highway. Google Maps also designates the road, although I think some guide books and web sites have more detailed information about exactly where the route was located.

The route also changed over time. An example of this is in Oklahoma City where Route 66 once passed by the State Capitol but later was built as an expressway in the northern part of the city (this route was later re-designated as part of Interstate 44). My article is mainly focused on the most recent route with some mention of the older ones.

Some restaurants have been in operation at the same location since the time that the actual U.S. 66 was located in front of their business. Others try to recreate the types of restaurants that were predominant during the 1960’s (the heyday of Route 66 before the Interstates began to divert traffic away from the old highway). This can be anything from the food (diners, etc.) to the decor (large booths, etc.). Some restaurants are completely modern but pay homage to Route 66 through signs or murals. Still others just happen to be on the route and possibly are on sections of the old highway that are not well marked and relatively unknown. There is now a great variety of cuisines and degrees of fidelity to the perceived Route 66 “theme,” but I want to put all of the ones in which I have eaten on my Route 66 List (and to share the information with readers). 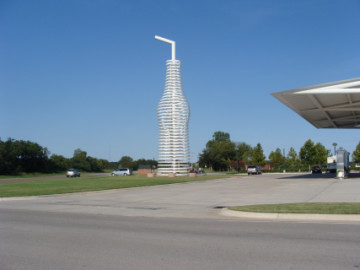 The giant pop bottle statue in front of Pops in Arcadia is becoming a landmark along Route 66, but the business itself is relatively new. Pops sells a large variety of pop (known as sodas in other parts of the country) and also has a grill where you can order hamburgers, etc. For me it is mostly a place to get some very good root beer and sarsaparilla. 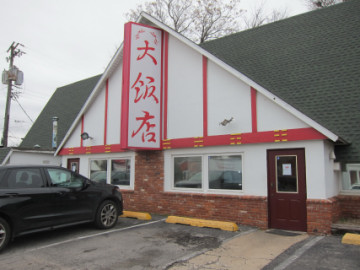 Until the early part of the 1950’s Route 66 went through downtown Edmond, along Kelley and Lincoln Blvd. to the State Capitol, along 23rd Street to May Avenue, and then north to N.W. 39th Street where it met the route going west which kept the same alignment throughout the history of the highway.

I think this “original route” (along Lincoln, N.W. 23rd, May Ave., etc.) was not known to most people my age as even being part of Route 66 until the preservation movement publicized this fact and began promoting businesses along these streets. I have reviewed several restaurants on these streets and visited many more, but I am not making an extensive inventory of the restaurants as part of this article. Instead, I will just make a note of one which is one of my favorites.

Chow’s Chinese Restaurant at N.W. 30th and May is special to me because the Chinese food is so much better than it was when I was growing up. This location is especially significant to me because my high school is located across the street. Some may have heard of Northwest Classen because it is the Alma Mater of Rick Bayless, Elizabeth Warren, and other notable people. I also sometimes make a shameless plug because it is where I began to hone my writing skills which have reached their full expression in the restaurant reviews on this blog (but as in high school I still frequently wander off-topic such as writing articles about Route 66). 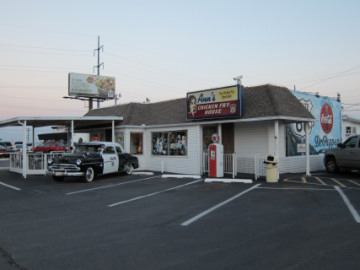 Ann’s Chicken Fry opened in 1971 after Interstate 40 was completed through Oklahoma City but when this portion of N.W. 39th Street was still officially designated as U.S. 66. Since that time it has continued to promote the fact that it is located on Route 66, but this is not the reason most customers come here. Instead, it popularity is based on the fact that many think it has one of the best versions of chicken fried steak in the area (I like it almost as much as the ones in Austin, Texas). In addition to the chicken fried steak, though, it has excellent fried chicken and an atmosphere that is very much like the restaurants of the Route 66 heyday. 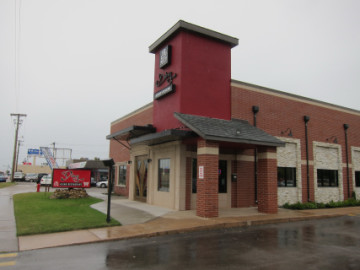 Ding Asian Fusion is in a building which has housed a number of restaurants in the past few years. The current restaurant is not one that I think has a particular Route 66 theme, but in my opinion it is good Chinese food. Ding used to be a branch of Szechuan Bistro and now has been sold to an independent owner, but the food is much the same as it was originally. There are quite a few Szechuan style items that are more authentic than Americanized, but the spice level is American by default (you can ask for a higher spice level if you wish). 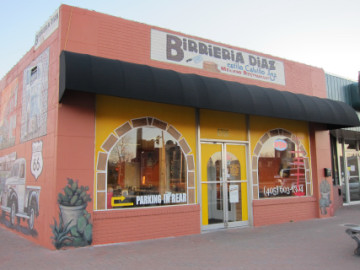 Birrieria Diaz has a Route 66 mural on its east wall, but otherwise seems like a normal neighborhood Mexican restaurant. It is unusual for the northside Oklahoma City neighborhoods, though, because of the fact that the food is very authentic. This is definitely one of the places I go because I like the food and not because it is on Route 66. 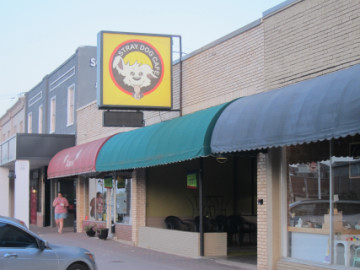 Stray Dog Cafe is best known for its breakfast and hot dogs, but it is open for dinner two nights a week (Fri. & Sat.) with specials not normally on the menu such as El Pollo Loco served with a ghost pepper mayo. Probably most people would be more interested in the very Route 66 style American food they usually serve. 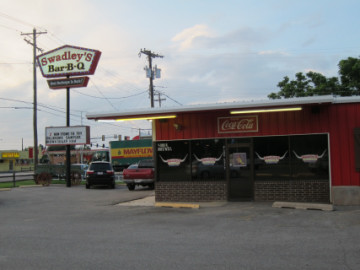 Swadley’s BBQ located a half block south of Route 66

Swadley’s Bar-B-Q is actually located a half block south of Route 66 on Rockwell Avenue, but I think it is close enough to include in this article. The traffic signal for Highway 66 is visible in this photo just above the Mayflower moving van (with the green, yellow, and red sign). Some may have to take my word for it, but the highway is actually quite close. I think Swadley’s has the kind of food that fits the spirit of the highway–it is something we remember from the time of Route 66 (those of us who are old enough) and it seems just as good now as ever. 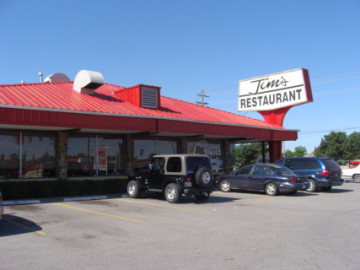 For years Jim’s was a diner which was open 24 hours, and now it is just open “late.” It is still a good place for those on a trip who want the food to be served quickly so they can get back on the road, yet to enjoy a relaxed moment while they are there. I think it is best known for its breakfasts, and I certainly think they do a good job with this. 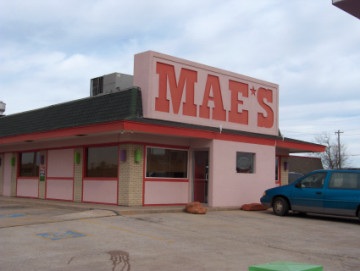 I would say Mae’s is more of a cafe than a diner since it has somewhat limited hours and is a little more upscale than the typical diner. I was impressed with the food (it is definitely not a greasy spoon type of place). Of special note is the apple streudl they serve for dessert, which is the most Czech-like dish I have found in this town which was largely founded by Czech immigrants. 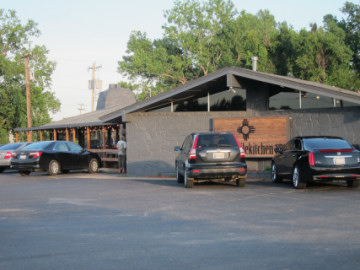 Green Chile Kitchen is one of the newer restaurants on this list, and has brought Santa Fe style cuisine to an area which is sorely lacking in this type of food. Of course if you are continuing west on Route 66 you will be able to get the real thing (either on the older route which actually goes through Santa Fe or on the newer route which gives you access to the numerous restaurants in Albuquerque which serve this type of food). As a purist I thought part of the food here was as it is served in New Mexico and some was not quite at this level, but I enjoyed all of it. 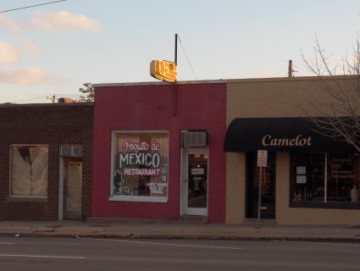 Poquito de Mexico gives a taste of another style of Mexican food that is near and dear to my taste buds–that of Tex-Mex. While I am not quite as wild about this food as I am of the New Mexican cuisine served at Green Chile Kitchen, I do think it is a better representation of Tex-Mex food than many similar restaurants in Oklahoma. It also has the pedigree of being there when this was the “real” Route 66 highway. 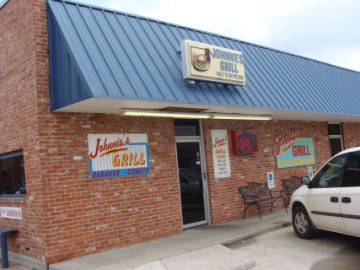 Johnnie’s Grill has onion burgers that are so good that I have never been able to resist the temptation to go back instead of trying one of the other places in El Reno which are also reputed to be very good. It is also on the old Highway 66 which made a rather serpentine route through the heart of El Reno which I think was to bring traffic in front of as many businesses as possible. Now with less through traffic, though, Johnnie’s seems to be as popular as ever and serves the best onion burger I have found anywhere. 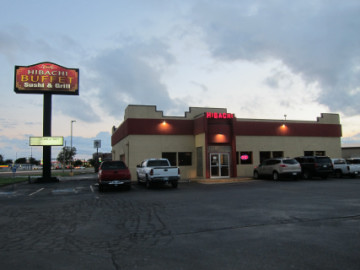 Hibachi Buffet is one of the newer restaurants on Route 66, and is one of the few that is also visible from Interstate 40 (with an exit close by). I think they have decent Chinese food, and I have enjoyed stopping here since it was at its old location in downtown Weatherford (then called Young China). I will take this opportunity to point out, though, that western Oklahoma is not lacking in restaurants along Route 66 that fit the “roadfood” theme, have been there since U.S. 66 was the main highway through town, and/or is marketing itself as a “Route 66” restaurant. 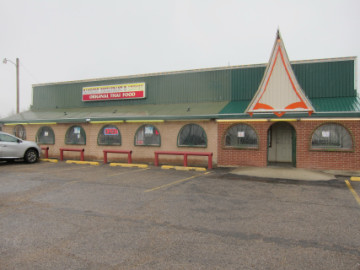 I know Bangkok Restaurant has been on this stretch of the old Route 66 in Amarillo for a number of years, but I do not know if it dates back to 1985 when U.S. 66 was decommissioned (my first visit to Bangkok was in 2005). In fact, I believe this is an example of redevelopment along the former highway once most of the traffic moved to Interstate 40. Now a neighborhood restaurant, Bangkok serves both the immigrant population from Southeast Asia who now live in Amarillo as well as the non-Asian population who just like good food at cheap prices (you get both of these at Bangkok). My favorite item so far is the chicken kaprao, but I can only make it back to Amarillo infrequently to try other dishes combined with the fact that there are several other good Asian restaurants nearby from which to choose (and I like them all). 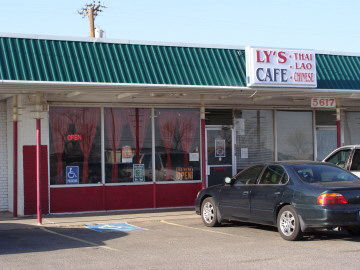 Ly’s Cafe is another good choice within the “Asian Strip” along Route 66 on the east side of Amarillo. This is a Lao restaurant which offers food served the traditional style (photos of traditional Lao food I have seen from California look the same as the food I got here). There are other restaurants along this strip from the 5600 to the 5900 block of E. Amarillo Blvd., but this is the only one I have found that is dedicated exclusively to food from Laos.