Warning: The magic method Gallery_Img::__wakeup() must have public visibility in /home/foodblog/public_html/wp-content/plugins/gallery-images/gallery-images.php on line 97
 El Paso Restaurants that Closed Before I Could Write a Review (2019 Edition) | Steve's Food Blog
Skip to primary content


One goal of this blog is transparency–I try to review every restaurant I visit and give the good and bad features I find at each one. There are various reasons why I am unable to write a timely review of every restaurant, and I would say the main one is lack of time.

Sometimes I intentionally wait until I am able to make multiple visits or I think there is a good chance I will do so and have a better or more complete picture of the food. It is always a judgment call, but in my mind is always the idea that when a review is published it should present an accurate picture of a restaurant. Still, though, while there is a purpose for waiting to write some of the reviews, some are merely ones that fall through the cracks.

This article presents short summaries of the El Paso restaurants which closed in 2019 before I could write blog articles about them. At this point it does not really make sense to write reviews of restaurants which are already closed, but I did want to acknowledge their disappearance from the city’s restaurant scene. 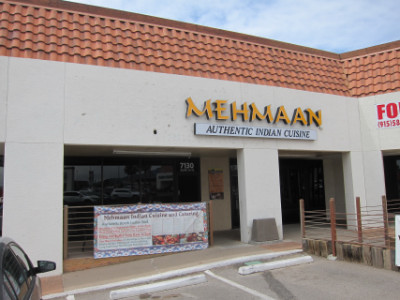 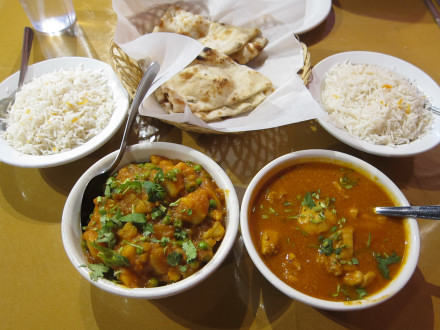 I thought the main dishes here were excellent, although the naan was pretty lackluster. A friend and I ordered the aloo matar and chicken curry shown in the photo. To me the restaurant’s sign saying it was “Authentic Indian Cuisine” seemed truthful, and I thought this food was very good. I thought the spice level was good as well as the flavor. The restaurant seemed to have good business, although nothing like I have seen at Indian Hut since it opened (I think its opening pretty much coincided with Mehmaan’s closing).

The pricing was a bit of a problem here. The main dishes were reasonable, but I had to pay extra for naan, chai, and soup (at India Hut in the buffet you get the whole meal including naan for the same price that Mehmaan charged for just the main item). I did think that Mehmaan had food that was largely on par with the good Indian restaurants in larger cities, although with a few exceptions such as the naan.

Personally I questioned whether Mehmaan merited frequent visits because of the amount of my bill when they added all the extras I wanted in a meal. On the other hand, the food was very good. I felt like Tevye in Fiddler on the Roof who kept debating about whether his daughter should marry a certain man and saying “on one hand…, but on the other hand…”, and went through this process quite a few times.  Ultimately I would have gone back to Mehmaan because I really like good Indian food, but apparently the majority of diners either disagreed or never had a chance to find this restaurant because it was so well hidden inside the catacombs of Colony Cove. There is still the good news that both India Hut and India Palace are on the west side and have good Indian food (at the moment I think India Hut offers the best bang for the buck but India Palace has my favorite dish which is the chana masala). 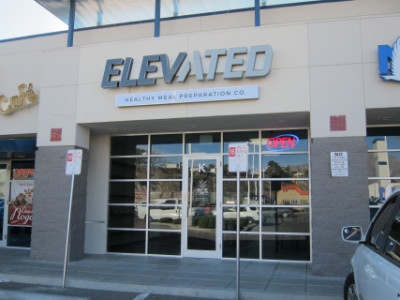 Elevated was a place that had prepared food that you take home and heat, but as the name implies it was several steps above what you typically find with this type of food. In fact, I have recently been getting prepared dinners at Sprouts but remembering that the ones at Elevated seemed to be a step above (originally called Just Fit, and later Just Fit Foods–Elevated).

I know the location on Resler is closed, but I am not sure about other locations. Google Maps shows a location at 2609 N. Mesa which only has a few recent comments, and Yelp lists a location on Montwood which does not have any comments later than 2017 (and I think must be closed). The Resler branch was convenient for me and I have not tried to seek out the others, but I was certainly impressed by the food. 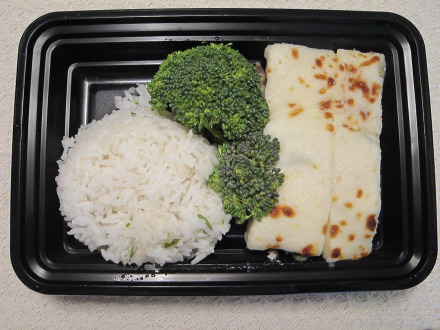 The recipes seemed to be very innovative, and some did not have a flavor that I particularly wanted to try again, but others were quite good. I think my favorites were the green chile chicken and the juicy lucy. The latter was ground turkey stuffed with mozzarella cheese and turkey bacon. It was like Ripe in the sense that every time I went the menu was different, and the juicy lucy seemed to be particularly hard to find on different visits. I could always find something, though, that was more than suitable for dinner (and easy to cook because all you need to do is heat them). 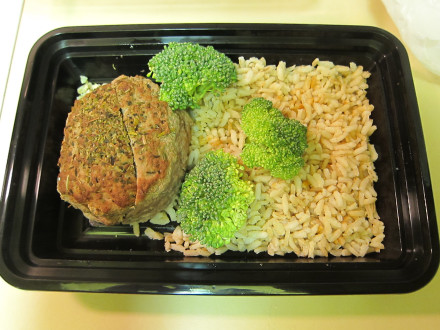 It seemed that on every dinner the vegetable was broccoli, and I was not crazy about this, but I certainly enjoyed the meals as a whole. The price was not too bad and the portion size was right. Although it was take-out only, I considered it to be one of my favorite restaurants. 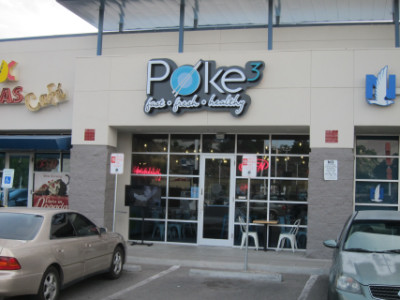 Update Feb. 2021: Poke3 is back in its former space on Resler and open for business.

Poke3 (which I believe is pronounced “Pokay Cubed”) is a local chain for a cuisine that is now very hot around the city. The food, though, is served cold including the fish, which is why I was not a big fan (as opposed to sushi which I think is much more enjoyable). Poke3 went into the space vacated by Elevated, but I think it was even more short-lived than Elevated. There are still some other locations of Poke3 around El Paso, though. 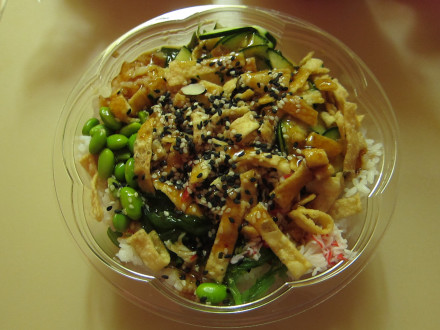 The dish I tried was the Poke Classic which was filled with good flavors, but I was not a big fan of the poke version of raw fish. I wish I could have tried other items on the menu since I believe you can get ones without fish or perhaps other types of fish.

Although other branches of Poke3 are still open, I believe this location suffered from too much competition from similar restaurants on the west side. I have yet to try the other ones, though. 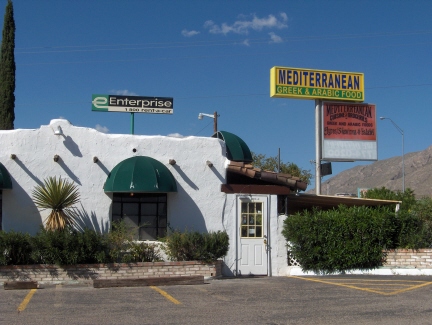 Mediterranean was not a restaurant that closed suddenly, but one which I frequented for a number of years after its opening in 1991 before it mostly fell off the radar for me. I went back twice in 2018, but when I tried to go in 2019 I discovered that the building was vacant and there was no sign of an active restaurant inside. I actually thought that it had closed earlier when it looked similarly vacant, but I believe the earlier time had been a false alarm when the owner was probably on vacation (he was a geology professor at El Paso Community College and took trips to all parts of the world in order to do geologic studies). 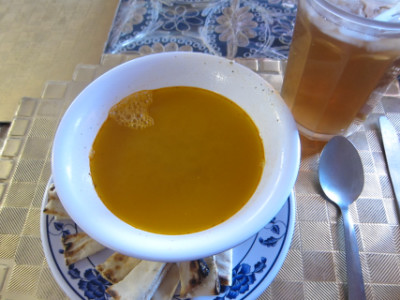 I definitely thought the food was worth the effort to try to catch the restaurant when it was open. My favorite dishes were the ones that seemed to be from the owner Sulaiman Abushagur’s family recipes such as the Libyan Soup. I have not had this soup at any other Middle Eastern restaurant in the country, and I think it is my favorite of this type of soup I have tried. Fortunately I had one last opportunity to try it on my 2018 visits. 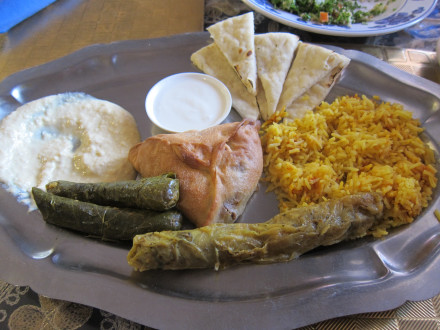 One quirk of the restaurant seemed to be that you got more for your money if you ordered a very large plate, such as the Syrian Platter I tried on one of my last visits. I thought two of the items were especially noteworthy (the fataier and the hummos), as well as a very strong and delicious hot tea which I ordered as a drink. 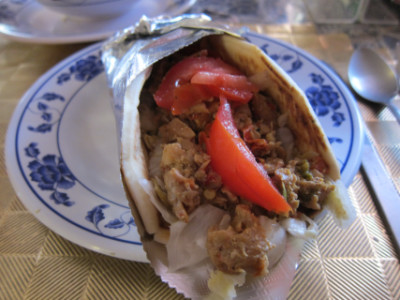 The Chicken Gyros Sandwich was an example of one of the lighter meals I had here–it was a sandwich I had not had anywhere else (nor have I had any since). Thus I can say this is the best chicken gyros I have ever had (and it really was quite good, as was all of the food here). 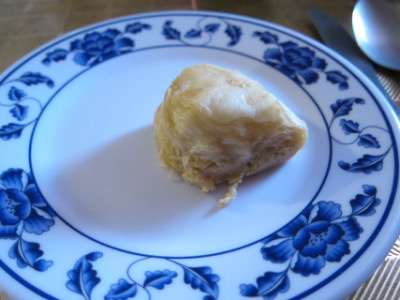 The Pine Nut Baklava was another example of how the food here was always very special. It was a “mini roses baklava” which I believe was not actually made with any parts of the rose plant, but which followed the traditional method of making baklava so that customers got the authentic version of this popular Middle Eastern dessert.

I am not sure if the restaurant’s closing signals that Sulaiman has left El Paso or retired from teaching, but I wish him well and remember his food fondly.