Rococo is one of the best known restaurants in Oklahoma City with one of the most celebrated chefs, but my experience with it is limited. I have not had a dine-in experience at any of the Rococo restaurants, but I have had a takeout order from the now closed restaurant in Northpark Mall (at N. May and N.W. 122nd St.).

During the pandemic Rococo was one of the restaurants that sold dinners in the Homeland Grocery Stores, and this allowed me to try some additional items. I know this restaurant is very good but I do not want to give it a rating yet based on takeout orders and dinners I have bought at the store. I do think it is reasonable to believe, though, that if the meals sold at Homeland are good the ones prepared in the restaurant must be even better.

The dinners sold at Homeland are not frozen, but merely refrigerated. I think this is a great idea, and several other restaurants participated as well. As far as I know this program will continue after the pandemic but I am putting it in the past tense just in case someone goes to the store and does not find the dinners. 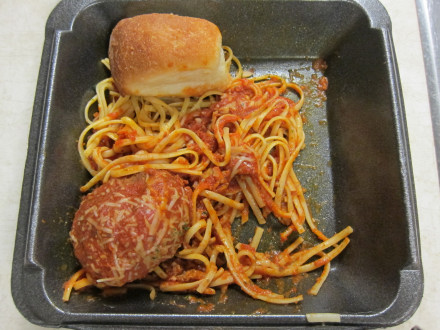 Although Spaghetti and Meatballs is not what I would consider an upscale dish, it was excellent nonetheless. The main thing that set this apart from the myriad of other restaurants that serve spaghetti and meatballs was the quality of the meatball. Yes, there is just one meatball, but it was an experience similar to eating my mom’s home made meat loaf, but with Italian seasonings.

For the sauce, I thought there were probably several restaurants that did it as well or better (Papa Dio’s is one that comes to mind). I would not rush out to get spaghetti with marinara sauce here, but with the meatball it was a special treat. 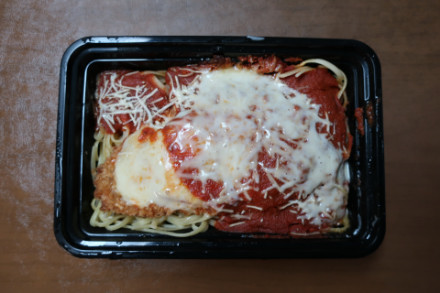 Chicken parmesan is a dinner sold at Homeland

Out of the dinners I tried from Homeland, the Chicken Parmesan is the one that I liked best. It had a very good well balanced flavor, and it was something that tasted very good when I heated it at home. As with the spaghetti, I thought the sauce was good but not particularly notable. This leaves the chicken, breading, cheese, and linguine that I think are probably notable compared to other restaurants (but probably with emphasis on the chicken). In any case I would have to say that this is one of the best in OKC, and it is even more impressive that I was able to eat it at home instead of one my dreaded frozen dinners. 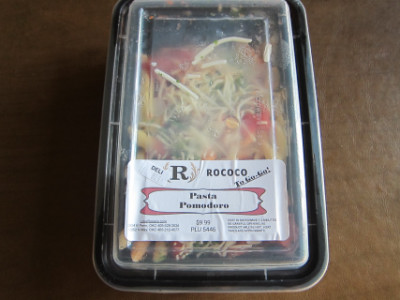 This is the package of Pasta Pomodoro as sold in the Homeland stores. Like their other items it comes refrigerated but not frozen. 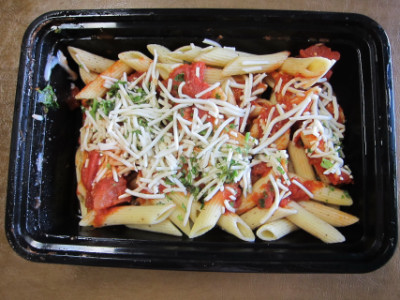 This is the pasta pomodoro when unheated and before the cheese is melted. This is a very fresh and flavorful dinner, especially for one that I can eat at home. As I have found with other dishes at Rococo, though, I think the pasta element of it is not as flavorful as the meats that they use. Here I thought it had too much spice, although I really appreciated the fresh and clean flavor of the tomato and the other toppings.

In a Nutshell
This is primarily an upscale restaurant where I think the big payoff is getting excellent meats along with the Italian flavors that go with them.

Right now the only two Rococo restaurants that are open are at Pennsylvania near N.W. 23rd (the original) and one on Western near N.W. 50th. They seem to have slightly different menus and specialties. I have not eaten at either of these locations so I cannot give any observations about them.

In Oklahoma City there is a wide choice of Italian restaurants. This is not a cuisine in which I really specialize or have a lot of knowledge. I just know that over the years I have found certain items at each restaurant which are my favorites, and which are different at each restaurant. The only thing I can say about Rococo so far is that the meats are so good that I think in many cases their high prices are probably justified. I just do not have much occasion to go to a restaurant like this and splurge.

I would really recommend going to Homeland, though, and picking up the chicken parmesan as long as they are being sold there. The one I bought was expensive compared to most grocery store food, but not for similar quality meals available at restaurants.