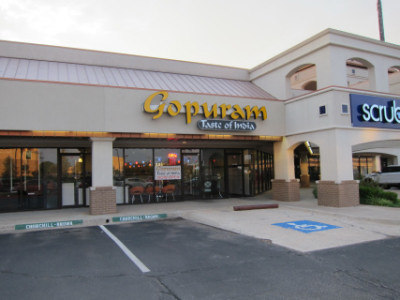 The original Gopuram Restaurant on N.W. 23rd Street was either my introduction to Indian food, or else it is the earliest place I can remember going. It was at a time when I believe it was the only Indian restaurant in Oklahoma City, and there were few to be found in other cities. It was a favorite restaurant of mine, but just a little bit too far out of the way to eat there frequently.

The original restaurant had an extensive buffet, and I do not think I ever considered ordering individual items from the menu. I now sometimes prefer to order individual menu items, especially since the spice level of the food can be made much higher than the amount that they put in the buffet items. At the new Gopuram as well as the original one, though, it is usually hard to made a case for eating anything other than the buffet. The price and flavor of the food are really worthwhile, while they usually have chutneys or pickle in the buffet to spice it up (there was one time when the chutney was not sufficiently spicy to make a noticeable difference in the food).

Other Indian restaurants in town have become more cutting edge in their menu recently, while I think Gopuram, being a product of the 1990’s, still seems to stick with things that are familiar to a large segment of the population (and I still enjoy these items as well). A large part of the attraction here is also the naan, which I think Gopuram does better than anyone else in town. 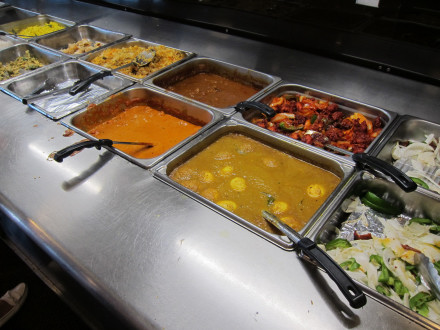 Most of my meals from Gopuram have been the buffet. It seemed that on every buffet there were one or two dishes that stood out, and this is largely how I developed my list of best items. The Daal Makani has stuck in my mind more than the others as the dish that is the most flavorful. What has made it even better, though, is when I could have it on the buffet with a variety of other flavors. 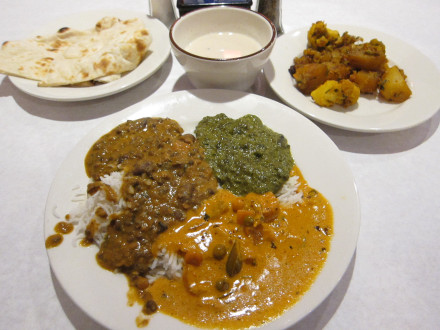 Other “best of the buffet” items include Vegetable Korma and Mutter Paneer. Every buffet I have tried has five star items, and I think it is a good thing the the selection of items was always different. One consistently good feature has been the Naan which they bring fresh to the table.

On my first visit to this location in 2015 there was another item which was quite good called Chicken 65. This was an Indo-Chinese dish which is listed on the menu as an appetizer. I have not seen it on several subsequent buffets, so it must not make the rotation very frequently.

All the buffets have a soup available, and my favorite was the Lentil Soup.

Orders from the Menu 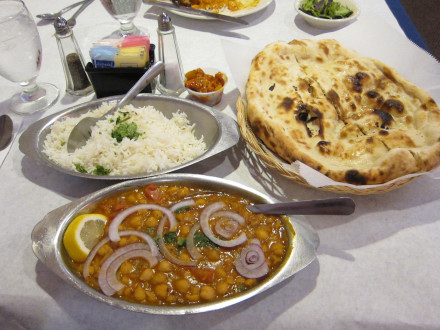 The Chana Masala is another one of my favorite dishes here, and the reason I ordered it from the menu is so that it would be spicier than the one on the buffet (with menu orders you can specify how spicy you would like it). I believe the naan was an extra charge (but menu items come with rice). They let me have the pickle from the buffet, so overall this was a good experience. The negative part of it was that I had to wait so long for the food that I saw people eating the buffet come in, eat their food, and leave before I ever got my food. It turned out that they had a large number of takeout orders so mine got delayed. I was glad that they were honest with me, and I have to believe that during the COVID era they are more focused on individual orders at the restaurant or for takeout than previously (Gopuram’s web site says that they are again serving the buffet so this would still be available if you want it). 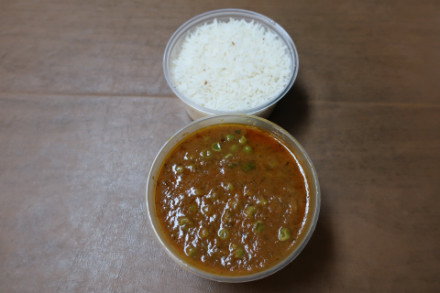 Delivery is another good option, and I used it to try the Aloo Mutter, a dish of potatoes and green peas. This dish is not listed on the menu at Gopuram’s web site, but was available on the Uber Eats menu. The dish was spicy as I requested, and large enough so that it may have been almost as much food as I normally get on the buffet.

Other Comments
I do not normally prefer buffets over ordering from the menu, but at Gopuram the buffet has many good features and some that I do not find at most Indian buffets. The selection is good, and it always includes both vegetarian and non-vegetarian items. There is always at least one or two items that are spicy, and usually this includes at least one vegetarian item. The staff will tell you which items are spicy. The buffet is refilled frequently (but sometimes they run out of items temporarily because they cook it in small batches). Three out of the four times I have gone for the buffet they have had suitably spicy chutneys or pickle (this is three times more often than I would find at the majority of Indian buffets).

Ordering individual items is a good option also, but it is really the buffet that has let me know which items I want to order.

There is a handicapped space in front of the restaurant, but it has an awkward design that can make it hard to use. There are additional spaces, though, in front of Pei Wei.