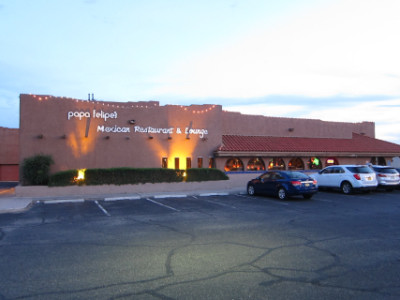 When I lived in Albuquerque for a short time in the early 1980’s I made a list of all the Mexican restaurants in the city and then proceeded to make comments and rate the ones I visited (see my blog post Albuquerque Mexican Restaurants 1981). Papa Felipe’s was on this list, although at the time it was located in the Coronado Shopping Center. Furthermore I rated it as four stars out of four (one of the few that I considered to be this good).

Since then I have had enormous curiosity about whether it has stood the test of time, until I was able to visit again in 2019. The short answer is that I was not disappointed on my return visit, and I think this is still a very good New Mexican restaurant. In truth, I think all the restaurants on my 1981 list were New Mexican style, while today there are many restaurants with south of the border style food that might compete as the city’s best Mexican restaurants.

Since the days Papa Felipe’s was in Coronado Center it has had a somewhat upscale setting and the large number of booths give it a coffee house feeling. I do not consider it to be expensive, but it is not a mom and pop restaurant which generally have the cheapest prices. It is still a comfortable restaurant with good food, and probably most importantly for my most recent visit, is open until 9:00 p.m. (this seems to be very late for most restaurants in Albuquerque). 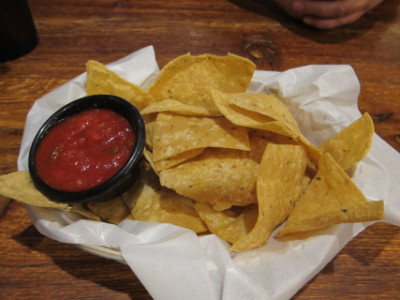 I thought the chips and salsa were very good–a good start to what turned out to be a good meal. 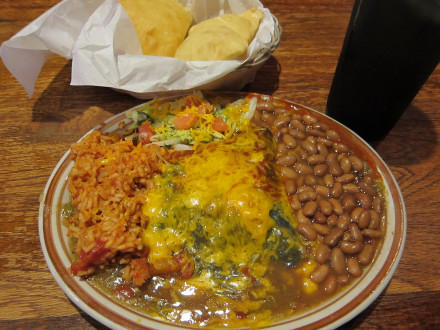 The regular order of Enchiladas is served with corn tortillas and comes rolled. The blue corn tortillas I ordered, though, dictates that it be served flat (and the regular order will also be served flat if you request it this way). I definitely recommend the blue corn tortillas, though, since this is one of the important elements of northern New Mexican food that I really enjoy. Although the flavor of the blue corn is sometimes barely noticeable in an enchilada, I think what I like most is the lack of corn oil flavor I have always found with this type of tortilla.

I thought a good choice for this meal would be to order the enchiladas “Christmas” (both red and green chile) which if nothing else at least makes the dish very colorful. As usually happens with me, though, I preferred the red chile in terms of flavor. Still, though, the green chile was better than I find at most restaurants, and was a worthwhile experience. As for the red, it was not only good, but was one of the best I have found in town (as I did in the 1980’s).

The restaurant has a sign warning customers that the green chile is “hot,” but it does not reach the level I find at some Hatch, Las Cruces, or rural northern NM levels (I put it at four chiles out of five). The red was what I call a “solid 4” (hot enough to have a good flavor but you do not get a chile overload on your tongue).

The drawback to these enchiladas, though, seemed to be the cheese they put inside. It did not seem to melt sufficiently when they cooked it, and I did not like the harder than normal texture it had.

Despite the cheese (which was either not prepared properly or else this is the style they do it) this was one of my favorite New Mexico style enchiladas I have found anywhere, and overall was very good. Even the green half was quite good, but I like the red half better. 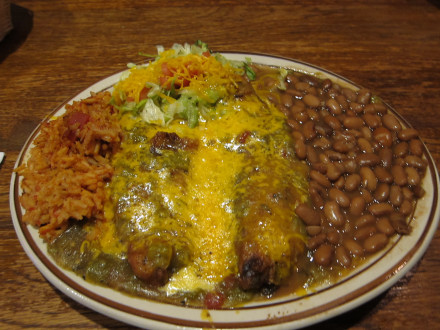 When I sampled a friend’s order of Chile Relleno it was quite a surprise in a good way. Not only did it taste very good covered with green chile, but the batter around the chile relleno was flavorful enough to almost be competitive with the ones at Chope’s in southern New Mexico. Of course most Albuquerque residents cannot travel to a location south of Las Cruces for their chiles rellenos, but I think the ones at Papa Felipe’s are very satisfying and are a very good alternative.

Other Notes
The whole beans here were excellent, and the rice was “OK.” Both plates came with a salad (no dressing–just the raw elements of lettuce, tomato, and cheese). These side dishes were very good, but mainly because of the beans.

I requested the sopaipillas with my meal, and I was very happy because this allowed me to have the perfect “blue corn enchilada” experience. The chiles rellenos were supposed to have their own order of sopaipillas to be served for dessert, but these never came. This was one of several issued I found about the service where certain items are available if you want, but you have to request it. Another issue is that by the time anyone comes around so that you can request something, you may not really want it anymore.

The bottom line is that this is some of the best red and green chile I have had anywhere, but I particularly like the red.