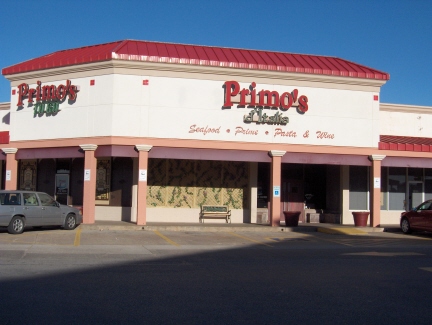 To me Primo’s claim to fame was that it was probably my mom’s favorite Italian restaurant. She was very fond of several Italian restaurants and really never met one she did not like, but I believe this is the only one she called her favorite.

Lately I am inclined to agree with her, especially after trying the chicken picatta which I believe may be their signature dish. There is a very extensive selection of upscale dishes on their dinner menu, though, and I believe some of these could be even better than the chicken picatta (at least I am convinced that the chefs are capable of producing some very delicious food). Over the years some dishes have fallen a little bit short with me (these are my four-star dishes). Even these, though, have been very good and are even better when you consider what Primo’s charges compared to other Italian restaurants.

My first five visits to Primo’s were between 2001 and 2007, and I am lacking photos of some items I ordered although I did make notes of which ones were my favorites. My next experience with the restaurant was in 2020, and in the meantime some of my previous favorites had been dropped from the menu. I believe, though, that the dishes which have been added are more than enough to offset anything that was lost.

One comment I have heard about Primo’s is that it may be the most authentic Italian restaurant in the OKC area. I have no way to verify this, but I do know that some of the dishes seem to have flavors that other restaurants lack, and this may very well be a result of having more authentic food.

Primo’s seems to present several contrasting realities. It is a restaurant in small town Oklahoma, yet the quality of food is very much like a big city. It is a family restaurant and a romantic one at the same time, and the dress code is much like it is in the Western wear store in the same shopping center. 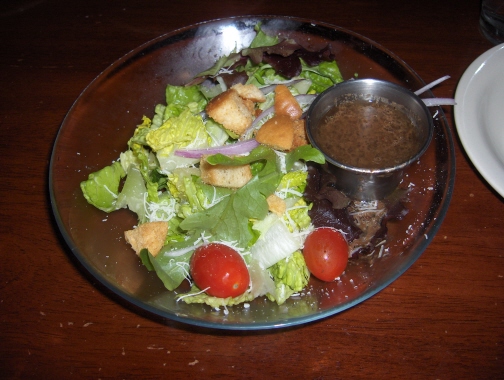 The House Salad is something that I judge to be among the best in the area. The current menu has an Italian tossed salad which I think is the same as the one pictured, but in any case I would expect it to be equally good. 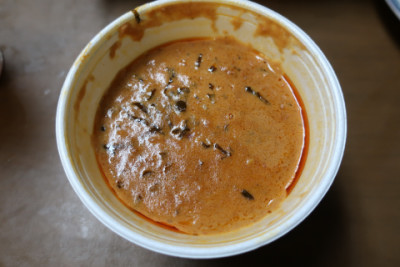 The Tomato Basil Soup was also well above average in the universe of Italian restaurants I have tried. This one was particularly good because of the pieces of basil that I could actually see and taste. 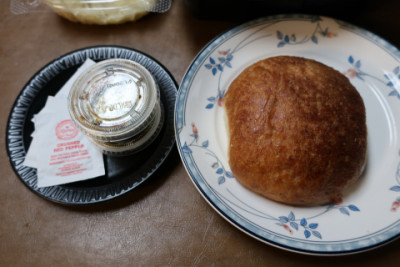 Fresh bread comes with every order, and goes well with either a salad or soup. 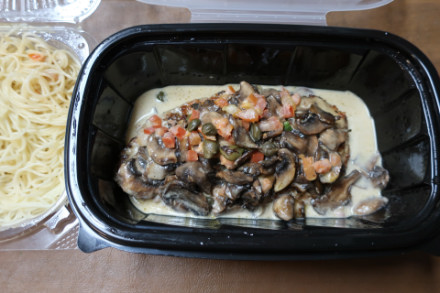 With Italian food there are certain dishes I enjoy more than others, so whether an item is five stars or four may be a function of my own taste as much as it is with the cooking skills of the chef. Nevertheless, The Chicken Picatta is something that I really recommend to others (and in fact I tried it because it was recommended to me). This was the first time I could remember trying this dish, and just about everything in it surprised me. The chicken was a breaded filet which by itself had enough flavor that it would have made a good dish. The sauce was made with lemon butter which despite looking like a standard cream sauce, was definitely a level above most of them. The mushrooms and capers were fresh, and produced a very good flavor combination with the other elements of the dish.

The angel hair pasta was another reason that I think this dish might be better than others available in the city, because of the fact that the pasta had a very good flavor without being too buttery or oily. 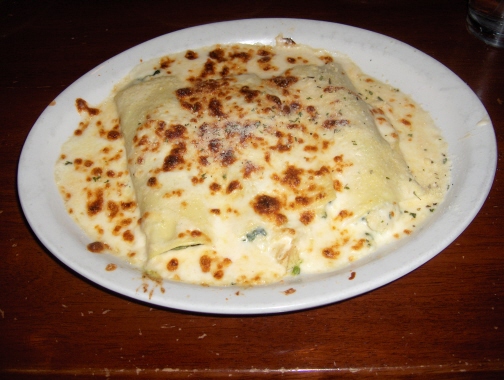 Canneloni is no longer on the menu

As far as I can tell the Canneloni is no longer on Primo’s menu. Like the chicken picatta, it seemed to be expertly prepared and was definitely one of the best Italian dishes I had tried anywhere. The one pictured had alfredo sauce, which I would say is really the reason for me liking it so much.

The Chicken Parmesan I tried here was one of the best I have had in the Oklahoma City area, or anywhere for that matter (but this was one of the first dishes I ordered and I do not remember the details about it). 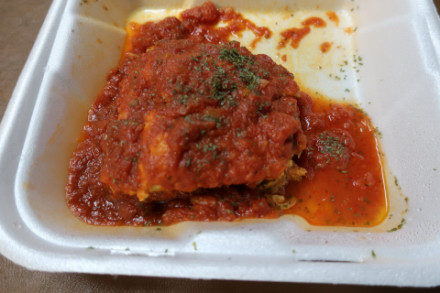 Lasagna in a takeout container

The Lasagna is officially called “Seven Layer Baked Lasagna” and I debated whether it should be five stars instead of four. The sauce was very fresh with a good flavor (five stars) but there seemed to be a high pasta and cheese content in proportion to the sauce (thus the four stars). I concluded that it was fine but my taste just ran more to some of the other dishes.

My other four-star dishes are ones that I tried in the past but because it was so long ago I am not sure I would give it the same rating if I ordered them again. One of them (the chicken cacciatore) is no longer on the menu so it is a moot point. Manicotti is still on the menu, and according to my notes it was just that I did not think the tomato sauce was as flavorful as some of Primo’s other sauces.

In a Nutshell
Previously I had thought that Primo’s served “small plates,” but now I would say they are regular sized plates while some other restaurants give you so much you have to take some of it home. Primo’s prices are pretty low compared to other restaurants, though, so I really like their way of doing things better.

I think Primo’s has expanded its menu of “fine dining” dishes, however. These are things like steak, seafood, and lamb. I do not usually have this type of food in mind when I go to Italian restaurants, but I believe this would be a good place to try it (because you would get a lot of bang out of your buck).

The chicken picatta, being a dish that is not served everywhere, is probably a good indicator of the kind of dish that is the restaurant’s specialty. The restaurant also seems to excel in the more complex sauces (such as the lemon sauce), and this is one of the few places where I think the alfredo sauce is really done the right way.