In college I was already developing into a foodie, but I just did not know it yet. I guess I figured that everyone was like I was–seeking out delicious meals when I could and doing the best that I could on my budget the rest of the time.

In choosing the University of Texas one of the side benefits was the food available in the Austin area–particularly the Mexican food (now known as Tex-Mex). I now think this had a deeper impact on my choice of schools than I realized at the time, but I am sure that anywhere I went would have had food options that I wanted to explore.

At this stage of life another staple of my diet was pizza. This was the era of all-you-can-eat pizza buffets, and although I remember one all-you-can-eat Mexican restaurant in Austin, pizza was still a better choice financially. However, I was not really looking for the cheapest pizza buffet–I was primarily looking for the one with the best flavor. I definitely found it at the Pizza Inn that was at the intersection of San Jacinto and Duval. At the time there was a huge competition between Pizza Hut and Pizza Inn, and I knew my feelings about the subject. Now there are just a few Pizza Inn’s left, but they reinforce my feeling that my taste in food while I was in college was at least on the right track.

The Pizza Inn on Council Road near Northwest Expressway is the only one in Oklahoma City, and the franchise’s web site says there is also a restaurant in Stillwater. There are a few locations in the Dallas area, and according to the web site its locations are primarily in the South. I do not now think that Pizza Inn has pizza that is among the best in Oklahoma City, but to put it among the top twenty percent of all pizza and top ten percent of the national chains would probably be a pretty fair assessment. I have not tried all the local restaurants or all the chains, but I do like the pizza at Pizza Inn. 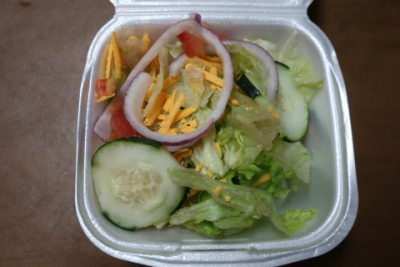 The ingredients of the Salad are pretty generic, and are largely comprised of iceberg lettuce and yellow cheese. The cucumbers and tomato step it up a bit, and I did not give it any demerits for the dressing. 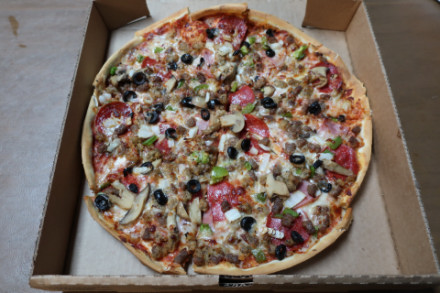 For me the most important aspect of national chain pizza is that it does not give me any unwelcome after effects (indigestion or worse). This pizza passed the test–this was not really a surprise but pizza as a food group is in one of the highest risk categories for me.

As far as the flavor, the Supreme Max really met my expectations. The sauce was excellent, and I strongly suspect this was the main reason I liked Pizza Inn in college. The sausage, though, was another strong point of the pizza. The crust, cheese, and other toppings were strong supporting elements–not the best I have had but there were no noticeable weak points in them. The only weak point of the sauce was that I did not think they put enough of it on the pizza (but with so many toppings I can understand why they did not put more).

I liked the large amount of vegetables that were on this particular pizza. I thought the pizza was highly seasoned and salty–something that I thought might give me stomach problems later but it did not. I do think, though, that in my college years I might have seen the highly seasoned aspect of it to be a definite plus for the pizza.

Other Comments
This is one of the pizzas I would order again if I had the chance, and I really think the Supreme Max was a good choice and I would like to have it again as well. The combination of meats and vegetables they had on it were excellent.

I have not dined in the restaurant but I have passed by it many times, and it looks as if they have a fairly large dining room (it is not a restaurant that only provides a couple of tables). There are quite a few delivery options, although because of its location in far northwest Oklahoma City delivery would not be available to a large part of the OKC metro.