I have found many sushi restaurants in the Southwest and other parts of the country that really do not approach the level of the good sushi places in the Pacific Northwest. At the same time, though, many of them have other items that I think are pretty good, and some have fairly decent sushi as well. At Ichiban I did not try the sushi, although even the best sushi I have had in Oklahoma City (such as Tokyo and Sushi Neko rates about 7 or 8 out of ten on a scale I would use for Seattle restaurants (and this might be a little generous). I think other items on the menu usually do a little better than this, and this is one reason they are usually my choice at these restaurants.

At Ichiban I ordered the standby I usually get at Japanese restaurants–the salmon teriyaki–for my inaugural meal. I know Oklahoma does not have the top quality salmon such as is available in the Northwest, but many places (such as Ichiban) do a pretty good job with it. Thus I was pretty impressed with this restaurant even though it is located in an area which outwardly seems like somewhat of a tourist trap just off of Interstate 40, where you also have a choice of such gastronomic heavy hitters as Twin Peaks and Texas Roadhouse (although I make the disclaimer that I have not eaten at Texas Roadhouse since the 1990’s and I have not tried Twin Peaks at all).

My point is that I did not expect Ichiban to be as good as it was based on its location and based on the fact that they also serve poke (which may be good but I do not think it is Japanese). I do think this restaurant might be a little under the radar and will be something that others might want to try.

Appetizers
Miso Soup came with my lunch although with some items on the dinner menu it might have to be ordered separately. I thought it was very good (this is the norm for OKC and I think the miso at most restaurants is about the same quality). 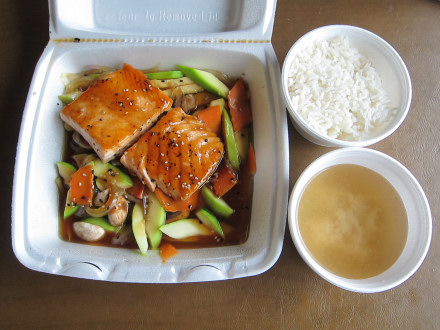 I was pleasantly surprised by the price, size, and quality of the Salmon Teriyaki on Ichiban’s lunch menu. The most important factor in it was the salmon, which was light pink (not white as at some restaurants) with a good texture and freshness. Of course this is not the west coast, but it was very good for this part of the country.

The vegetables were the main factor that I thought was much better here than at most other restaurants. They were fresh with the right amount of crunchiness. I think one key to a good flavor is a bright color such as is evident in the photo.

The sauce was a little thin, and this is one area where I think restaurants such as Tokyo do a better job. However, it was not too sweet and I thought it had a definite Asian flavor rather than being too Americanized.

Overall Assessment
The price difference between the lunch and dinner menus seemed substantial, although I expect that the dinner plates are much larger (for my appetite the lunch plate was just right).

There was really no element of the salmon teriyaki lunch plate that left me disappointed, and I suspect other parts of the menu are very good as well.