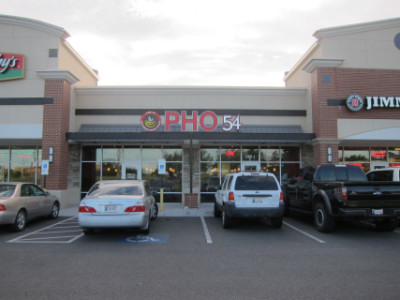 Pho 54 is part of a growing trend of suburban Vietnamese restaurants with a menu that is much more limited than the ones in the Asian District, but which do a good job in giving people an authentic taste of Asia.

Pho 54 is located on the west side of May Avenue a short distance north of Quail Springs Mall. Things have probably gotten to the point that people can chose the closest Vietnamese restaurant, and be able to find one about as easily as Chinese or Thai restaurants. I do not say that all of them are exactly the same, though. What initially attracted me here was the fact that they serve banh xeo, a dish I have been trying to find in suburban restaurants for quite a long time. Pho 54 does not have a lot of the dishes I would like to find, but it does have this one. 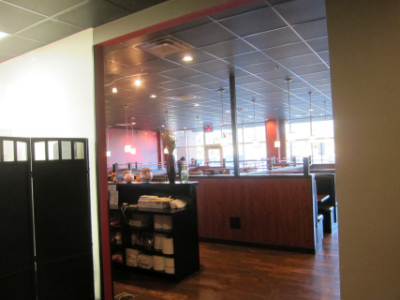 The interior is modern and comfortable, but it is so small I had a problem with cold air coming in the front door on one visit when the weather was particularly inclement. The service was good, and the food came out quickly. 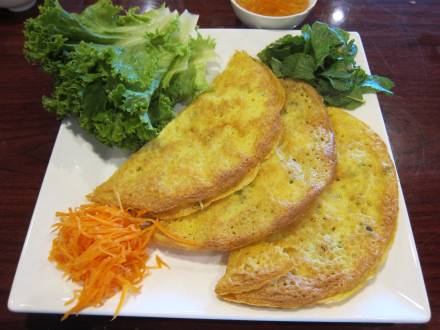 I believe this is only the second restaurant at which I have tried the Banh Xeo, a delicious crepe style dish which comes with a meat filling, and in which you add your own garnishes, fish sauce, and chile paste. I thought these were a little less enjoyable than the ones I have had in El Paso, mainly because the crepe seemed to disintegrate very easily when I added the sauce, and I thought it should have held together better. Overall, though, it was very good. 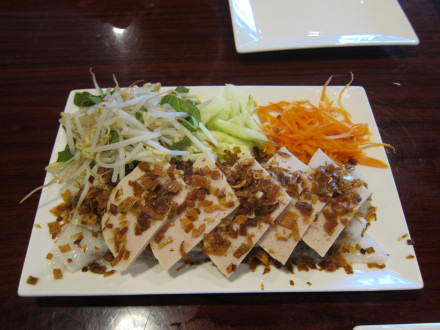 The Banh Cuon Cha Lua was a dish I did not order but just sampled, and I thought this was very good as well.This is a dish of thin rice sheets served with Vietnamese ham, beef, cucumber and mint.

Like the banh xeo, I have had a similar dish at another restaurant, and in this case it was Lang’s Bakery in the Asian District of OKC. I liked the one at Lang’s a little better, but I will say that the one here seemed more substantial and was a better deal for the money (still I would advise people to go to Lang’s if they can). 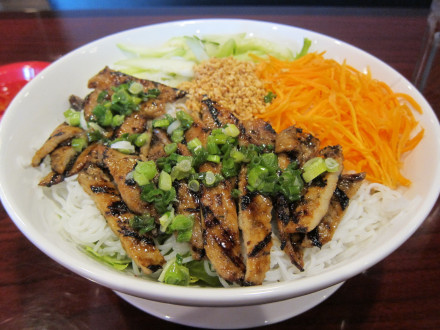 Vermicelli bowls are really my standard way to test a Vietnamese restaurant and are what I order most frequently. The first one I tried here was Grilled Chicken, usually a good choice as it was here. It contained mint, lots of peanuts, and no bean sprouts (from this standpoint I thought it was perfect). They did not offer a lemongrass chicken dish, which is what I usually like to order (the only lemongrass dish here is the beef). They explained that all the vermicelli bowls have lemongrass, but the beef has more than the other. In any case, I thought the taste was good and I thought it was fine without the extra lemongrass.

The fish sauce was a little sweet, but it is in good company with the other suburban restaurants. As with the lemongrass I don’t have any complaints about it, only that I had one at Pho Ca Dao in the Asian District that seemed more authentic to me.

Putting It All Together
When I heard that this restaurant had banh xeo I thought it might be more like the Asian District restaurants, and this was not really the case (mostly because the menu is still pretty limited). Still, it is very good for suburban restaurants, and I cannot imagine that anybody would not like the food here.

My dinners probably would have been more enjoyable with the jasmine tea I usually order, but the price on the menu was so high I did not order any.

I did not try the pho. Apparently they only offer beef or vegetable broth, and in my mind the better pho restaurants would have other choices such as chicken or pork. Still, I can’t really comment on something I haven’t tried.

Overall I would say this is one of the better choices for Vietnamese food on the north side. 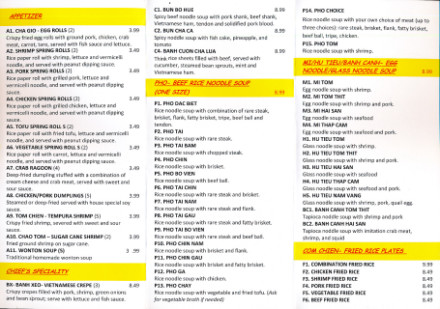 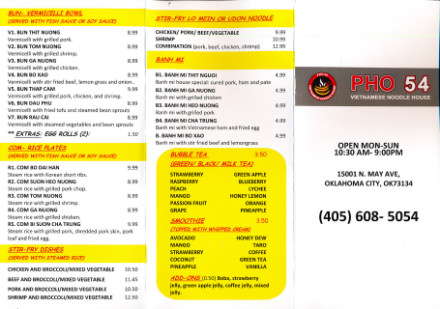