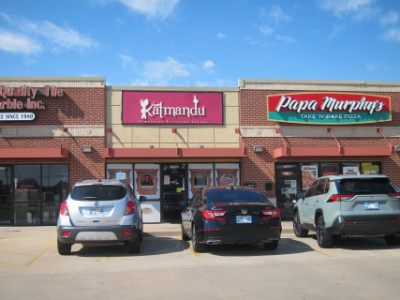 It took me a little while to figure out this restaurant when I first discovered it on line. At first I had heard that there was Nepali food in northwest Oklahoma City, but finding out where it was took a little digging. I do not remember the exact sequence of events that occurred, but eventually I found out that it is served in what I think can be accurately called a tiny restaurant called Pasta2go. I was surprised, though, to see the sign in front which said Katmandu (actually it says Eat Katmandu but I did not see the “Eat” part until later).

The restaurant has about four tables and a counter. As of this date it has not been re-opened for dine-in service and only serves takeout (some of the restaurant delivery services also come here). 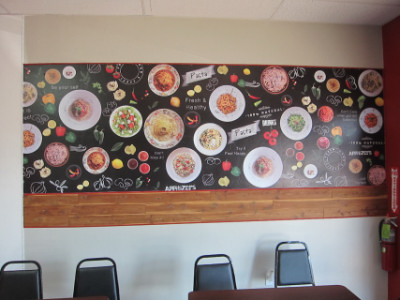 A picture of the pasta served here

There is a large picture on the east wall showing the selection of pasta items on the menu. I have not tried this part of the menu but reviews of it are good. The menu has a good variety of choices, but they do not serve pizza (although it is next door to Papa Murphy’s pizza if you really want to get a pizza). To me the big drawback of ordering pasta would be that they do not have either iced tea or wine available (the drinks I would typically want to have with pasta). This is primarily a takeout restaurant, though (and since the outbreak of the Corona virus it only serves takeout). Thus the obvious solution to anyone who wants a certain drink seems be to have it available at home. 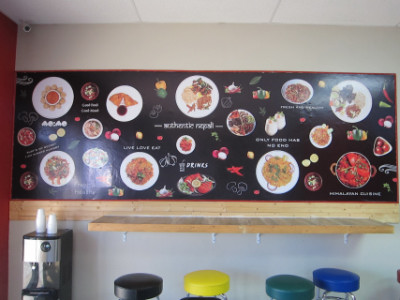 The reason I went, though, was to try the Nepali food. I believe this is the native food of the owner Omar (I did not ask if he was from Nepal but it is obvious from his knowledge of Nepali cuisine). I had previously tried Mt. Everest Cuisine in Edmond and a Nepali/ Indian restaurant in Albuquerque called Namaste. Based on this I thought the menu choices at Pasta2go were somewhat limited, although it would take me several visits to this small restaurant to get a good sampling of what they do have (not to mention, of course, the pasta dishes should this become something that was also of interest to me).

Some of the menu items appear to be from India, but Omar says they are Nepali style. I cannot comment on something I have not tried, but I think these dishes will be very similar to what you would get in one of the city’s Indian restaurants. 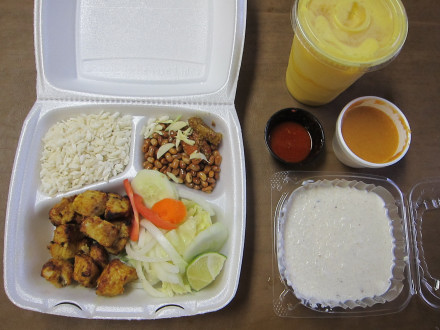 Chicken seukwa with chiura, bhatmas and aachar in the box, along with mango lassi drink, sauces, and dessert on the side

My first experience here was on the recommendation of Omar, and I think he made a very good suggestion. The Chicken Seukwa has a very flavorful grilled chicken much like the meat served on Middle Eastern style kabobs. The side dishes are ones typically served in Nepal, and for some reason are not served on any of the other plates at the restaurant (although you can order some of them as appetizers or side dishes).

I have tried to look them up on line, and I hope I am describing them correctly. The upper right hand item is soybeans with small pieces of meat (I think this is the bhatmas with choila). Articles on the Internet say that choila is generally made with water buffalo meat but other types of meat can be used. The upper left white item is beaten rice (I believe these should be eaten with the soybeans or with a sauce).  A small Nepali style salad is also served.

The word aachar means a spicy pickle which I believe was served with the soybeans (actually just about everything on the plate was spicy so it was hard to tell which one was the most spicy item).

Along with my meal I ordered a Mango Lassi (yogurt drink) which was excellent, and especially with this type of food. The restaurant gave me a spicy red sauce and a yellow momo sauce. The Kheer dessert was excellent and was like the rice pudding you see in Indian buffets.

I need to make several comments about the food pictured here: 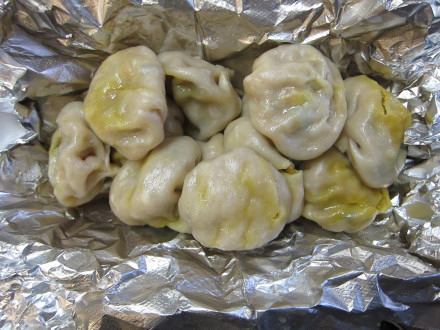 Momo is a dumpling which is one of the iconic Nepali dishes, and which I had previously tried at Mt. Everest Restaurant in Edmond. The filling can be either chicken, vegetable, or goat (I got the vegetable filling). I really liked the one here, and I think especially because of the excellent momo sauce (they also have a more spicy sauce that is a red color).

The problem with the dumplings, though, is the same one I have with Chinese dumplings. They make a good appetizer, but I don’t like to eat this as a meal.  I did not do so, but the order here is very large and is certainly enough that you could eat it as a meal. I just think it is somewhat one-dimensional compared to the chicken seukwa with its side dishes. 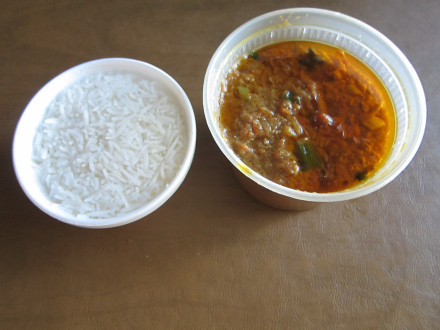 There are several kinds of curry here, but on the recommendation of the owner I got the Chicken Curry. This is a yellow curry that is milder than most. I thought the flavor was very good and the chicken was very good. It was really very much of a chicken dish with just enough curry for a flavoring (and without having leftover curry to eat by itself with no meat to go with it). 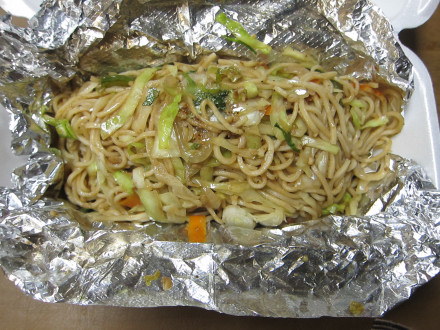 At Namaste in Albuquerque I made some discoveries that were somewhat life changing for me in the gastronomic sense. One was that I really liked Nepali food, and another was that unlike the Indian version of Chinese food, the Nepali version was more true to the original Chinese dish and had much the same flavor. Chow mein is the only Chinese dish I have found at Nepali restaurants, and it sounds rather improbable that it would be as good as it is, but this has held up in the places I have ordered it.

The Vegetable Chow Mein was a good test because it was the same dish I had tried in Albququerque. The one here was equally good and had a very similar flavor. The Nepali flavor has more spices which I think can include such things as turmeric, paprika, and cumin. In this sense I did like the one in Albuquerque a little bit better, but it was really very similar to the one here. I did not taste the cumin in Pasta2go’s version, but the owner told me that almost all of his food has cumin (I will make another comment about this at the end of the article). I really liked the freshness and the sauce of this dish (which includes soy sauce), and the spices were a little different from a true Chinese version but were very good nonetheless. 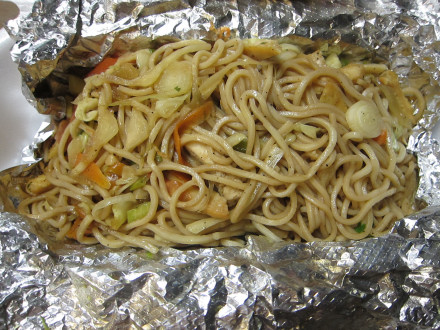 The Chicken Chow Mein was also very good, with the chicken being grilled as it was in the seukwa dish.

Drinks
The Mango Lassi (a yogurt drink) is quite good, and in fact better than many I have tried in Indian restaurants. Other than that probably the best choice of drinks for me would be the bottles of Coke which they have for a good price (on the price scale that most restaurants charge). One thing to note is that if you get takeout or delivery (the only choices here) the mango lassi is wrapped very tightly so that it will not spill.

Other Comments
My first order was delivery, and when I got the food I was not sure how I should use the sauce. It turned out I put it on everything, and it was good on everything. I had talked to the owner previously over the phone, so I was happy with what I ordered and there were no major issues with the food.

The second time I went to the restaurant and got additional suggestions from Omar (he suggested the chicken curry). This helped in knowing what to order this time and in the future, but as far as takeout vs. delivery the food is really the same.

One tip I can give others is to let them know how good the chow mein is. I had discovered this dish in Albuquerque, and otherwise I would probably never think of ordering a dish like this in a Nepali restaurant (in Albuquerque it was called chow chow and this is probably the reason I had enough confidence in it to want to order it).

I do want to mention, though, that cumin is one of the most commonly used spices in Nepali cooking. Omar said that almost all of the Nepalese dishes have it, and all of his “Himalayan Flavors” items have it except for the Tandoor chicken. I usually can take it in small amounts and sometimes I can even enjoy it, but at Pasta2go I got a very large dose in one of my meals (when I had the Chicken Seukwa with Momo). I do not know which dish had the “overdose,” and it was not nearly as obvious when I had some of it as leftovers (and with the chow mein and chicken curry I really did not notice it at all). I do not know if I will want to try certain items here again because of the cumin aftertaste I experienced, but I did think that everything here tasted good while I was eating it. This reaction to cumin is a personal thing to me and certainly does not affect what I would recommend to others, other than to inform them about my own experience.