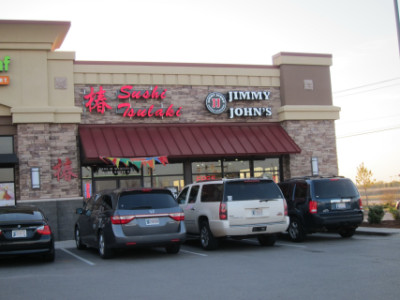 Tsubaki Sushi & Hibachi is a new member of the growing club of sushi restaurants around northwest Oklahoma City, and two things I noticed immediately about it were its spotless cleanliness and its excellent service. These are characteristics of Japanese restaurants in general, but Tsubaki seems to be better than most.

I have yet to try the sushi, which is about two-thirds of the menu. I am not a fan of California rolls and other items which make up a large part of the sushi list, but they do have a fairly large selection of sashimi. For now my comments about the restaurant are only for the food I have tried, and for anyone who wants to try the sushi I can say that the menu selection looks better than average.

What is notable about the non-sushi menu is first that they even have one, and second that it is very good. I should qualify this statement by saying that I do not think Tsubaki is comparable to Tokyo or Sushi Neko, but it is very good nonetheless. I would not have expected this to be the case based on many experiences at strip mall sushi restaurants, but Tsubaki is the proverbial “hidden gem.” 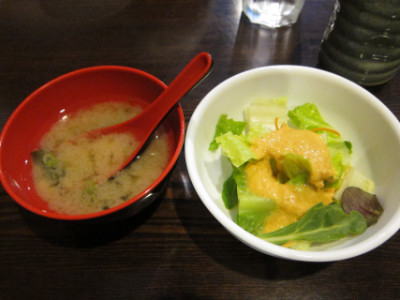 Miso and salad served before lunch and dinner

The Miso Soup at Tsubaki has been one of the highlights of the meals I have had. In fact, I would say the quality is close to the one at Tokyo Restaurant (meaning that it is one of the best in town). The soup and salad come free with both lunches and dinners

Like most Japanese restaurants in the city, the dressing is the best part of the Salad, and I would say the dressing here is one of the best. 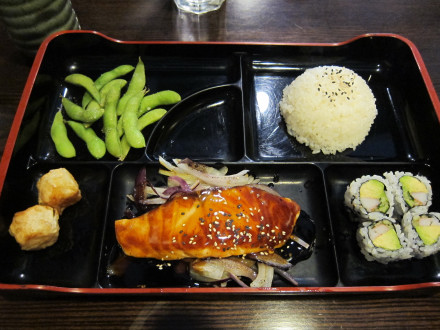 The Lunch Box Special is the only way the restaurant serves cooked items at lunch, but there are four choices for the way they cook the meat, and several choices of meat for each one. The one shown above is the Teriyaki Salmon, which is my favorite. I am at the point of saying that the salmon is better than at Tokyo Restaurant, although at Tokyo I definitely give a higher rating to the side dishes. The side dishes here are all good, and consist of edamame, shumai (shrimp dumpling), sushi, and rice (the sushi is California roll). A salad and miso also come with the meal (as they have with all meals that I have ordered here).

The salmon here started out as a rarther white color, but has become more red recently as salmon should be. It is cooked very well and has a very good teriyaki sauce. I would not say the salmon is “fresh” (I think this is only truly the case in the Pacific Northwest) but it is good quality and flavorful.

I want to alert readers that the restaurant does not bring wasabi for the sushi, and you have to ask for it if you want it. In fact, it took a couple of visits before I realized that I wanted it because otherwise the California roll (served on the box lunches) tasted bland to me. 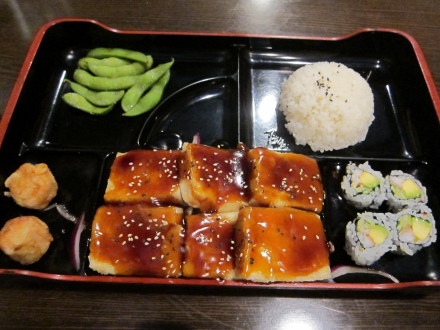 The Tofu Teriyaki is a nice change, but something I will probably not order again (I like tofu served a lot of different ways, but with just sauce it was too plain). 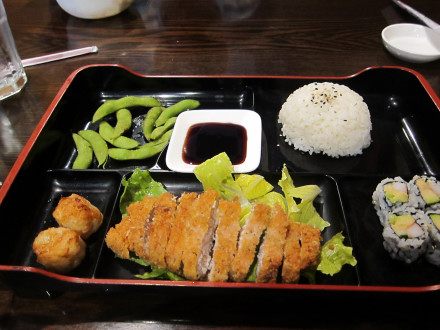 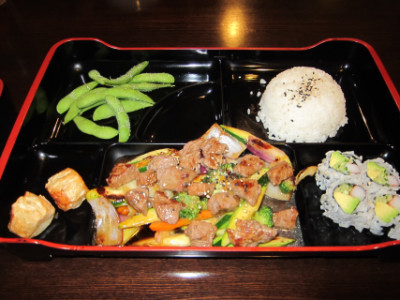 The Hibachi Steak is another excellent lunch box dish, with very good meat and a flavorful seasoning. It seems to be a good value for the money as well. 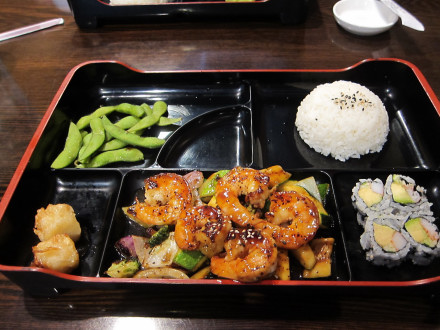 In contrast, I thought the Hibachi Shrimp was disappointing in both the flavor of the shrimp and the sauce (but this could be just my taste because I usually do not order shrimp except on the Gulf coast).

Hibachi Vegetables were in the middle of the scale–I liked the vegetables but was disappointed with the sauce. I would definitely get this over the teriyaki tofu, though.

Dinner Menu
The dinner menu mostly has the same items as at lunch, but there is a larger quantity of meat and not as many side dishes. You can order dinner items at lunch if you wish (some things such as tempura udon are only available on the dinner menu). 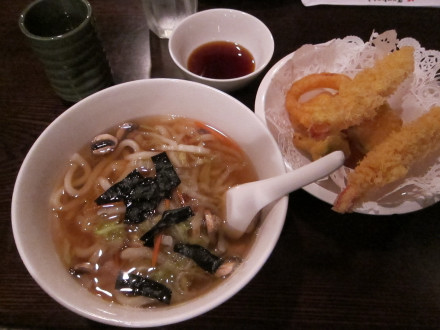 The Tempura Udon was not quite as flavorful as the one at Tokyo, but still very good, and well above my expectations for a strip mall sushi restaurant (I know I am repeating this phrase, but I really want people to not let the location of this place keep them from trying it). The tempura part of the dish is served on the side so it stays crisp until you either put it into the soup or eat it separately (you can also request a dipping sauce for the tempura). The shrimp tempura alone makes it worthwhile ordering this dish, and the vegetables have been different on different visits but always very good as well.

The udon soup is filling even without the tempura. At other restaurants I have learned to ask for some sansho pepper to give it extra flavor (Tsubaki has it but you have to ask for it). While I was surprised how good everything was (especially the tempura), I was equally surprised that the sansho pepper is not automatically served with the meal. I am sure, though, that a lot of this has to do with its location in a suburban strip mall. 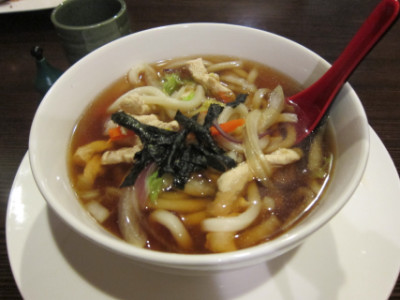 When I ordered Chicken Udon it pointed out the fact that the weakest part of this dish was the soup, and without the tempura I thought the flavor fell a little flat. 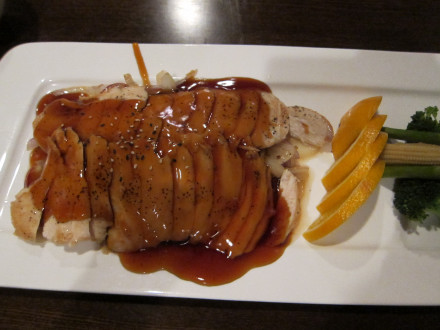 The Chicken Teriyaki had a sauce that was a little flat in flavor, but the quality of everything was excellent. Like the tempura udon it was a little expensive but not lacking in quantity. My theory is that the teriyaki sauce goes better with the salmon than chicken (and I think teriyaki was originally developed to enhance the flavor of beef).

Tea
Green Tea used to be on the house but now they charge 50 cents (still a pretty good deal). It is served in a cup (when you need refills they will come around and serve you).

Takeout Orders
As of my latest meal they are only serving takeout and delivery, so my comments about the dine-in experience might have a few modifications (it is still good quality and enjoyable but the way it is served is slightly different). The menu seems to be the same, though, including offering their lunch specials. 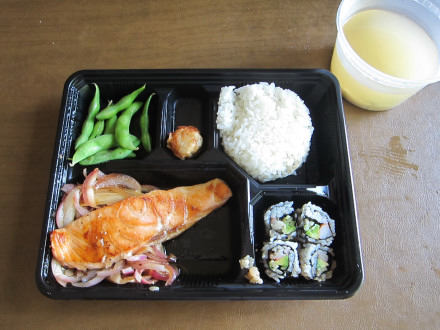 The Salmon Teriyaki Lunch Box is available for takeout if you order it during lunch hours, and for me is the best bang for the buck at Tsubaki. I think the salmon is excellent, with the miso soup also playing an important role in the lunch (the miso comes with the lunch while at some other restaurants they charge extra for it). The only things I missed in the takeout dinner were that it had one less shumai dumpling than was served in the restaurant, and I did not get soy sauce or wasabi to put on the California roll (these are not major factors but they do point out why I usually have a better meal when I can dine in). 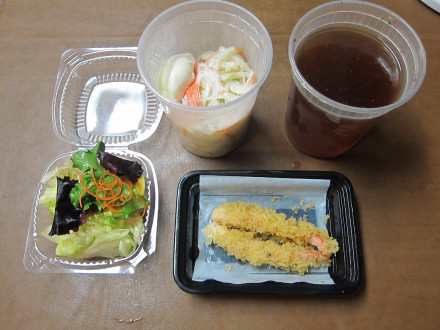 Nabeyaki Udon is on the dinner menu at Tsubaki, and is a further illustration of why I think this is a legitimate Japanese restaurant and not just a strip mall sushi joint (not that there is anything wrong with a strip mall sushi joint, of course).  Like the teriyaki salmon, though, there were a couple of things missing from this dinner that I think I would have had eating it in the restaurant. One was a sauce for the tempura (although most restaurants expect customers to dip it in the soup rather than eat it separately with a sauce on it). Probably a more serious omission was a lack of sansho pepper to give the soup extra flavor (even when eating in the restaurant, though, they do not give you the sansho unless you request it).

My conclusion about the takeout meals is that some minor things are missing but overall they are excellent meals, especially for takeout.

Note: As of August 2020 Tsubaki has not reopened its dining room and is serving takeout and delivery only (delivery is through the food delivery services).

Overall Assessment
The lunch menu seems to provide some significant savings in price, but the selection of items is limited. The three things I think are best, though (salmon teriyaki, pork katsu and hibachi steak) are on the lunch menu.

They used to give out hot hand towels before the meal but this changed in 2015 (this is also about the time they started charging for tea). There were several changes at this time but they were subtle–they do not seem to have affected the quality of the food.

I have heard that the sushi is also good, but the California roll served on the box lunches is not something I would rush out to get.

Their sister restaurant Tsubaki Szechuan in the Asian District is no longer open. 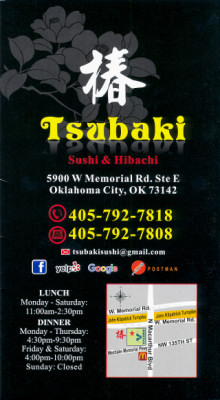 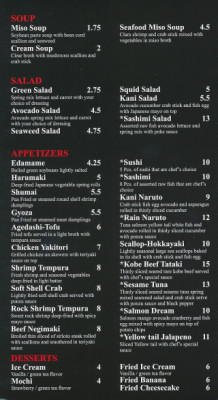 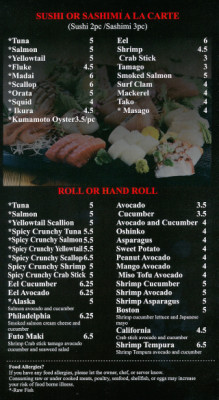 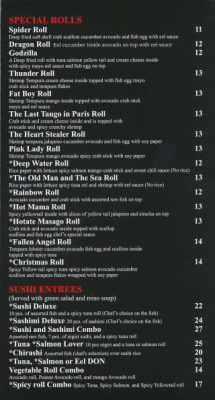 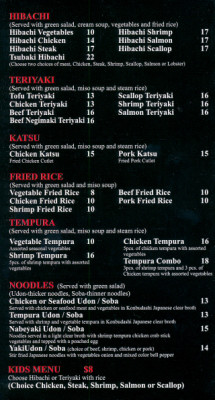 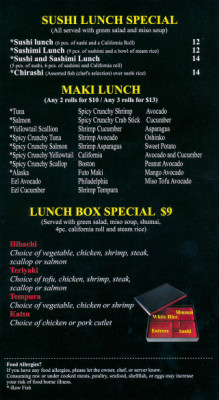