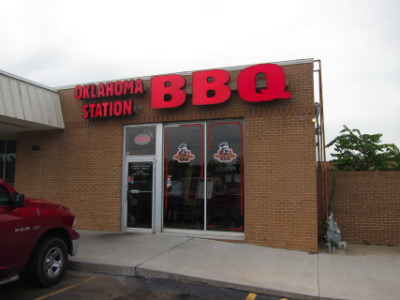 Although Oklahoma Station is one of the oldest barbecue restaurants in Oklahoma City, a change of ownership in 2015 not only prompted me to start over with a new review but more importantly, I think the food is quite different than before. The menu is the same and on the outside everything looks the same, but I have noticed marked differences in the items I have ordered.

In some cases these differences are good. For instance, the smoked turkey not only seems better than before, it is also my current choice as the best in Oklahoma City (this has been the case the three times I have gone to the new Oklahoma Station, so I don’t think this is likely to change). 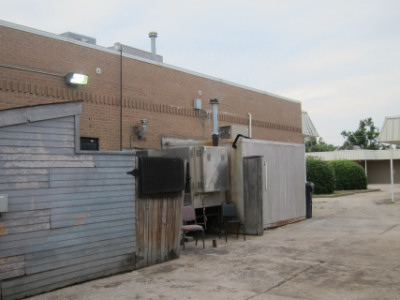 Some items are about the same as before, and this is a good thing. Included on this list are the okra, sweet beans, creamy cole slaw, and most of all the incomparable banana pudding (at least I have not found any others that match the pudding at Oklahoma Station).

Some other meat items pose quite a mystery to me as to why they could be so good before but so forgettable at the current restaurant (especially when the turkey has been consistently good).

The Barbecue
The first thing I should point out is that there are more meat items available than are listed in the review, and as is the case with most barbecue restaurants, I have not been able to try them all. You can get a head start, though, with the three meat combination dinner (shown in the next two photos). Both of these served as a meal for two people with leftovers to take home, but your appetite may vary. 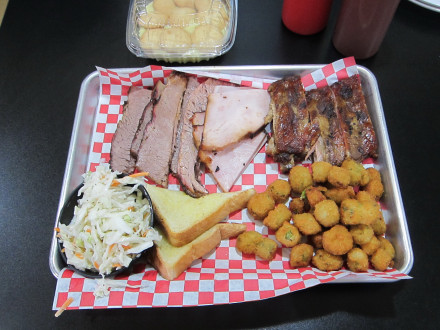 The Smoked Turkey has seen a marked improvement over the ones I tried at the “old” restaurant. The gentleman in the serving line included it in his list of recommendations, and based on this I would say asking the employees is a good starting point if you are not sure which items to order.

I thought the turkey had everything required of good barbecue– it was cooked well, it had a good smoky flavor, and the meat was high quality. I recently had the opportunity to order the turkey at Swadley’s (another contender for the best turkey in the city), and I would say Oklahoma Station was the clear winner. 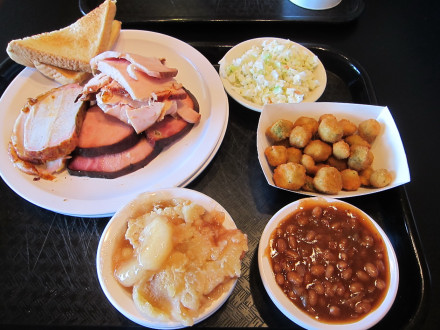 The Pork Tenderloin was one of my favorite items before, but the one I had recently was dry. In fact, dry meat was a common theme with many of the meats I have ordered here. The Brisket had the added problem of being tough, but it had a better flavor than many of the others.

The Pork Spare Ribs have been my biggest disappointment at the new restaurant, with the texture and flavor of the meat seeming so wrong I was wondering if they just had a bad day.

Ham is an item I have only tried at the new restaurant, and I thought it had an excellent flavor but was dry. Somewhat inexplicably a piece I took home as a leftover was much better, so based on this I am rating this as one of the better items at the restaurant.

Side Dishes
The creamy Cole Slaw was one of the best in the city at the old restaurant, and I think it is the same now. They have two types of cole slaw, and I have always found it best to stick with the creamy one (rather than the vinegar based version).

The Sweet Beans were excellent.

The fried Okra has been excellent two out of three times, with a good flavor and texture. Like all the side dishes they frequently put out fresh batches, but if you happen to be there when they do not look fresh out of the oven I would advise ordering something else.

Several other vegetables and side dish choices are available, and I think the selection here is unmatched by any other barbecue restaurant in the city. Generally the items are fresh, but in the case of the okra they will tell you if it is not right out of the oven (and therefore you may not want to order it).

Be sure to check the “relish bar” in front of the restaurant for pickles or other appetizers (customers can take whatever they want). 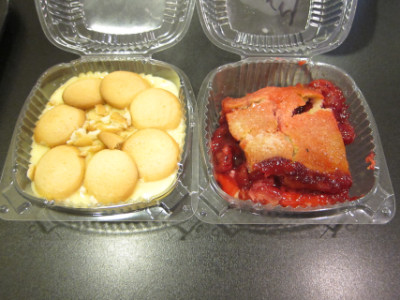 The Banana Pudding was my favorite dessert at the old restaurant, and is still available. Somehow they have found the secret to making the best banana pudding I have found anywhere, but I think the secret is just keeping it simple but making sure everything is fresh and follows the recipe correctly.

There was a great variation in the cobbler, though. The Apple Cobbler was excellent, but I thought the Cherry Cobbler was bland.

Additional Comments
I have discovered that high quality iced tea is an integral part to the full enjoyment of a barbecue meal, and the fresh brewed tea here is among the best (sweet tea is also available).

The trouble with the new Oklahoma Station, compared to the old one, is that only a few items have impressed me as being standouts. If you are looking for turkey and banana pudding, I would say this is the best restaurant in town. Some other items are solid, including the ham and several of the side dishes. I had one fairly good experience with the pork tenderloin, but it was not up to the standard I found at the old restaurant. The brisket and ribs are certainly letdowns compared to what the restaurant served before (in my opinion, of course, but I do owe it to readers to give you my best judgment).