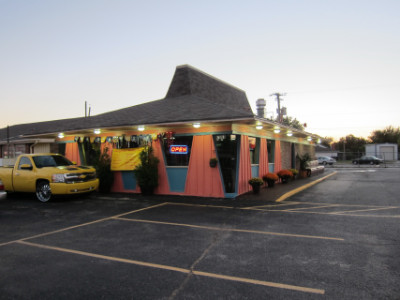 The new Margarita’s on the west side of May Ave.

The original Margarita’s had been a landmark on the east side of May Avenue just south of Wilshire for a number of years, and was so popular that it many times tested the limits of the old diner/drive-in style building. The owners served Zacatecas style specialties from their family recipes along with many Tex-Mex style favorites to a public that probably did not care very much whether their food was authentic, but they did appreciate good Mexican comfort food.

In 2013 I made my first visit to the “new” Margarita’s across the street from the original location. I immediately noticed a larger dining room with more comfortable tables, and there were several indications that it had changed ownership. It turned out that the couple who had run the restaurant for years had retired, and their daughter had opened the new restaurant. I think the daughter added some items to the menu, but the “Specialidades de la Casa” and other Zacatecas style dishes were still there.

At the new restaurant I have seen decorations on the wall from Aguascalientes (a neighboring state to Zacatecas). They have added new items to the menu, so my take is that they have retained many of the elements of the old restaurant but are branching out to include additional items that customers will enjoy. Some of the new dishes I have tried have been the Calvillo style of food (from the state of Aguascalientes) that I have found in various restaurants around OKC, so I think this is the main focus of the new dishes.

My review of the old restaurant describes some of the dishes I tried before the restaurant moved. Those dishes for which I have a before and after comparison seem to be the same at the new restaurant, with the exception that I do not remember the meat being as tough as it was in a few items I have tried recently.

Set-Ups
Like most Mexican restaurants, Margarita’s gives you a “set-up” of Salsa, Cheese Sauce, and Chips. Overall I was not very impressed by these items, but they are better than at some other restaurants. The tortillas did not come with real butter (but instead there was some kind of spread), and I would guess that they were not home made. 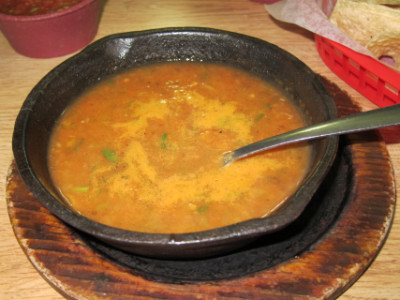 Habanero salsa can be requested

A pleasant surprise, though, was the tastier than average Habanero Sauce I ordered, which was also a larger serving than average (and came free with the meal). This was not fiery hot, but was spicy enough to be very good, and to satisfy my craving for something more authentic than the first set-ups had been. A bonus was that I was able to take home the leftover sauce, and it was very good there as well. 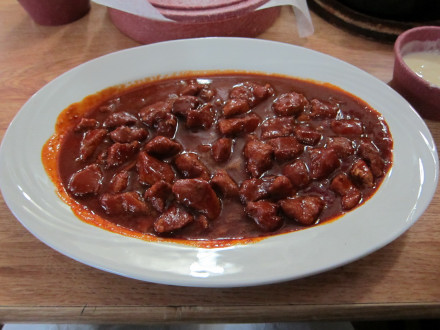 The Guizo de Puerco with Red Chile was one of the first dishes I tried at the new restaurant, and was one reason I became very encouraged about the new restaurant. In contrast to many similar dishes I get in other restaurants, this one reminded me of the kind of food I would find in Mexico. In fact, other than the meat being a little tough this was just about as classic an example of this dish I could find. It is listed as being “with red chile” because customers can order either red or green (another sign that this is authentic Mexican food). The heat level of the chile was about four stars out of five, and was at the level I find comfortable. I also thought it was at about the level it would be served in Mexico, and that was lacking the extreme spiciness that would only be appreciated by dyed-in-the-wool chileheads. As one of the dishes listed under “Specialidades de la Casa,” this is one of the Zacatecas style family recipes that have been carried over from the old restaurant, and I think it is a very good choice.

It should be noted that the order normally comes with rice and beans, but I asked them to omit these items. The fact that they will do this and I can have a more reasonably sized meal is another reason I like this restaurant (it is also a little bit less expensive this way). 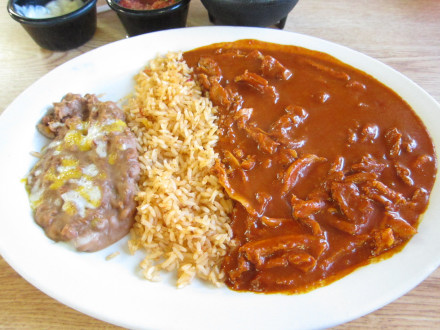 Margarita’s Mole (also listed in “Specialidades de la Casa”) is a very good dish that I have enjoyed at both the old and new restaurant. The chicken seemed a little dry at the new restaurant, but it had a very good red colored mole sauce (I think this is one of the “must order” dishes of the restaurant). To get the full flavor I recommend getting it with the rice and beans, so this makes quite a substantial meal (and is the reason I do not order it very often). 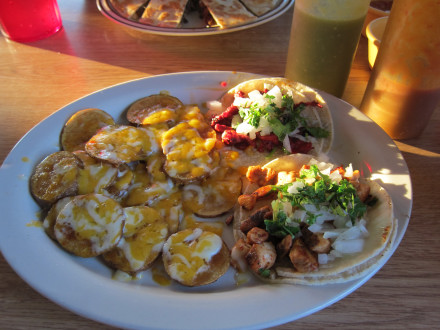 Mexican Tacos are similar to the Calvillo style tacos served at numerous restaurants in Oklahoma City. The tacos are good because they are authentic, and you can order the amount you want to fit your appetite. Out of the two types tacos I tried the chicken was better, with the pastor meat falling a little flat compared to the tacos I get at Abel’s.

The Papas tasted greasy to me, and I thought I could have gotten a better side dish. 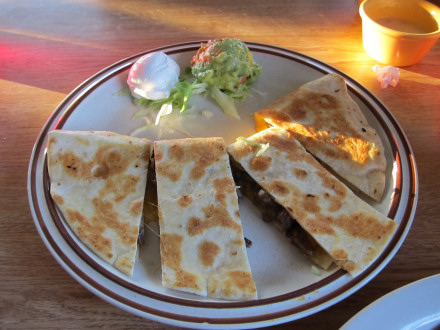 The Quesadilla was another example of the type of food I thought was better at Abel’s (and some of the city’s other Calvillo style taco restaurants). The main problem here was the the fajita meat tasted gristly.

Costillas
Costillas Zacatecanos are another specialty of the restaurant that I think are quite good. They come in a huge serving, though, and I have not ordered it at the new restaurant (so please refer to the review of the old restaurant for a photo). 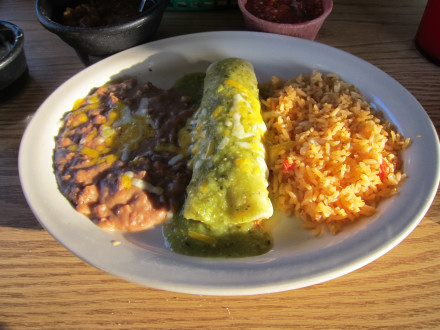 The Enchilada with Chile Verde is among the ones in OKC that I consider to be quite good, and the beans were above average as well (the rice was about average). The green chile had about a “4 star” spice level (out of 5). This was about right for me–spicy but not fiery, and it had an authentic Mexican flavor.

An Overview
The “Specialidades de la Casa” are generally the items I like best here, and I believe they are made from authentic family recipes from Zacatecas. This is not the reason I like them, but rather it is because of the sauces such as the mole and the sauce used in the guizo. Many of these dinner are huge, though, and I do not order them all the time simply because I do not normally have that kind of appetite.

Some of the “Tex-Mex” items I tried at the old restaurant did not seem to match up to the ones at other restaurants (fajitas and cheese enchiladas are examples). I thought the guacamole and tortilla soup were quite good (I classify these as Tex-Mex as well, although I do not know their origin. A chile relleno I sampled was much better than one I had at the old restaurant, and several items seem to be better than before.

The third type of food I have found here is the Calvillo style tacos, quesadillas, etc. (street food). Overall these have been a disappointment compared to some other restaurants, although I would still take them over the Tex-Mex food which is still served at many restaurants in OKC (particularly restaurants in the north side suburbs).

The main issue for all the food at Margarita’s is the price. The street food is pretty reasonable, but everything else seems higher priced than anywhere else in town unless you go to a restaurant such as 1492. When restaurants charge more I expect higher quality, and I have had issues such as dry meat, etc. Still, this has not been the case with everything I have ordered, and this is one of the few places in the city where I feel that the sauces taste like they do in Mexico.

I have seen a lot of negative reviews for Margarita’s on various web sites. My conjecture is that it has more to do with what you get for the money than it does with the food itself. I have pointed out both the positive and negative I have found with the food here, but the bottom line is that I really do love their sauces (which to me is the heart of Mexican food).

Number of Visits: 7 (many more at the old restaurant) 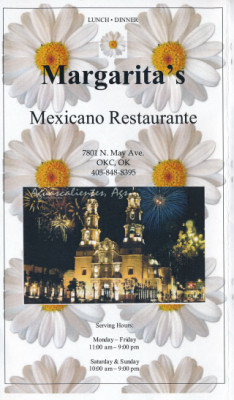 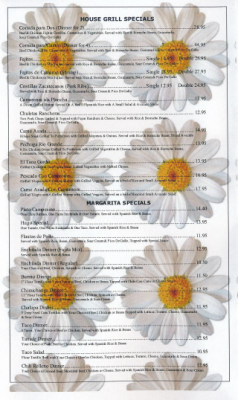 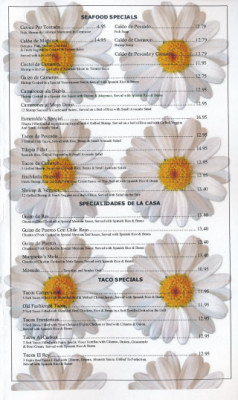 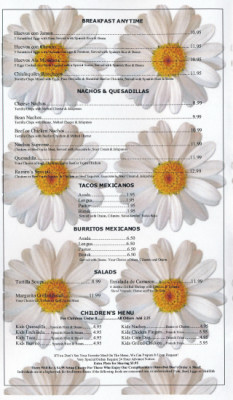 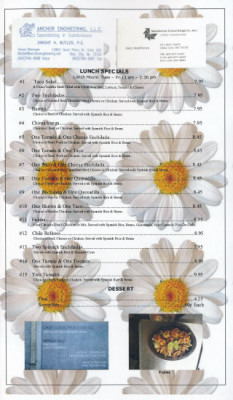 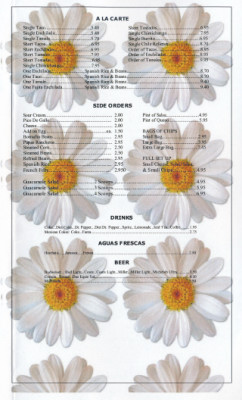