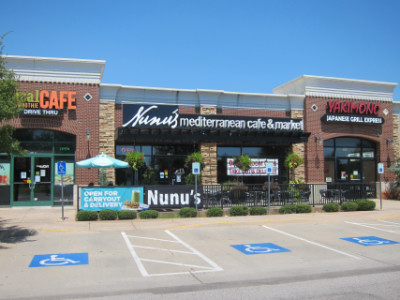 Aug. 2020: Nunu’s dining room and outdoor patio are open, and it is also open for carryout and delivery

Oklahoma City is fortunate to have more than its share of Mediterranean and Middle Eastern restaurants, but as far as I am concerned the market is still far from saturated. Not only is this one of the most delicious types of food in the world, it is also recognized as being one of the healthiest. Nunu’s in far north Oklahoma City is one of the relative newcomers serving this type of food, and it seems to strike the right balance between the high quality of a very special restaurant and the casual setting of a home style restaurant people can make a frequent destination.

Janet (Nunu) is no longer at the restaurant on a regular basis, but she has left it in capable hands and the food still follows the same family recipes.  For the most part there will not be any noticeable changes at the “new” Nunu’s.

If anything I think the food is better now than it has ever been. I noticed this particularly in the chicken kabobs. At the same time the items that were my favorites before are still very good (such as the lentil soup and the hashwa). The menu is smaller at the “new” Nunu’s but what they have seems to be uniformly excellent. The old Nunu’s seemed to be a replica of the old Cedars Restaurant in Tulsa, with some items that were not traditional Middle Eastern food but which were popular among Oklahoma’s Lebanese and Middle Eastern community. My older review of Nunu’s is still available for reference.

Nunu’s used to have a deli at the back of the restaurant which I think has largely disappeared, but as a result I believe the restaurant now has more tables and can better accommodate the large crowds which I have frequently seen (Note: in 2020 the extra space is used for people to spread out and practice social distancing). 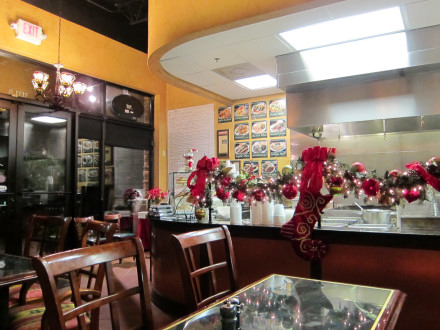 Customers pay upon ordering at the cash register, and drinks are “serve yourself” from the soda machine (I should take this opportunity to also mention that I have enjoyed the Lebanese style lemonade which I think is still available). The menu and daily specials are listed at the counter. 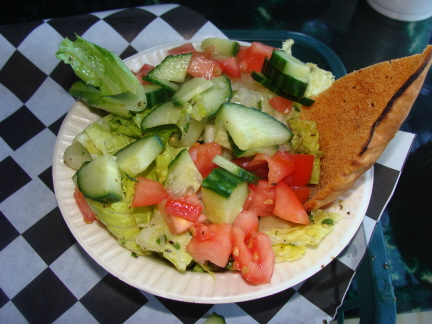 Salads are a little different here than in most restaurants because they can easily serve as an entire meal or a substantial part of a meal that you can assemble by ordering a la carte items. Salads come in a full or half size so they all tend to be somewhat large. If you want a basic salad, though, the Salata is available consisting of cucumber, tomatoes, and mixed greens (the menu lists it as their “side salad”). 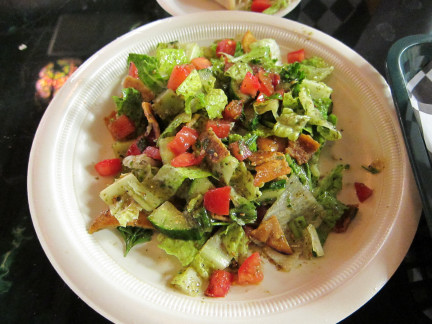 I believe my favorite salad is the Fatoosh Salad, a mixture of lettuce, tomatoes, cucumbers, green onions, and parsley with a lemon juice and olive oil dressing. One thing that is special about it, though, is the mixture of herbs that give it its unique flavor. Many times I prefer this salad to tabouli or other side dishes that I normally get at Middle Eastern restaurants because of its flavor and freshness that are not normally found in restaurant salads.

The menu also includes a plate of fatoosh with chicken breast or beef kafta, and this offers a more inexpensive way of ordering these items than ordering each one separately. 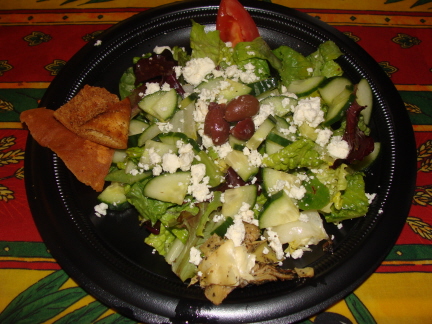 Normally one of my favorite salads is Greek Salad, and it is the same here. I just gravitate toward the fatoosh, though, because it is not available at many other restaurants (and Greek salads are rather common throughout Oklahoma City). 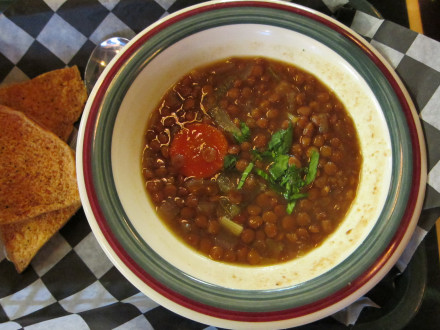 The Lentil Soup has really been my favorite item at Nunu’s since I have been coming here. The cup size is shown in the photo, and the bowl is even larger, but in either case I consider the soup as an appetizer rather than my main meal here. I try not to get too detailed in these reviews and say that you should not order the soup as a main dish, but this is only what I have found in my own experience. Definitely order the lentil soup if you can, but I like to get something else with it.

Other than ordering a cup or a bowl, though, the only way you can get lentil soup is on the veggie sampler plate (something I frequently order because of the fact that it includes the soup).

In the past Nunu’s has had other soups available as the soup of the day, and I do not know if they still do this. All of them have been good, and I would feel confident ordering anything they had. 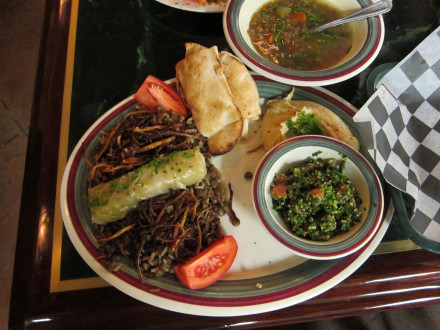 The veggie sampler plate contains most of the vegetarian items available at the restaurant (with the notable exception of falafel). The Veggie Cabbage Roll is quite good, being hand rolled with rice, tomatoes, and garbanzo beans cooked with lemon juice. Although only one cabbage roll is served, there are enough other items so that it makes a substantial meal.

Hummus is more flavorful than most, with the texture being just right. The olive oil to make hummus a good dip for the pita bread. In the early days of going to Nunu’s I thought the garlic overwhelmed the other flavors, but over time this has evolved from a good dish to a great one, with the flavorings (and not the garlic) becoming more pronounced.

Tabouli is very fresh and well balanced. There is quite a bit of competition around the city for good tabouli, but overall I think Nunu’s is the best (in fact, this is one of the best items at the restaurant).

The veggie cabbage roll is served on a bed of Lentil and Rice Pilaf, a very fresh and filling serving of this vegetable mixture with onions mixed in for flavor. 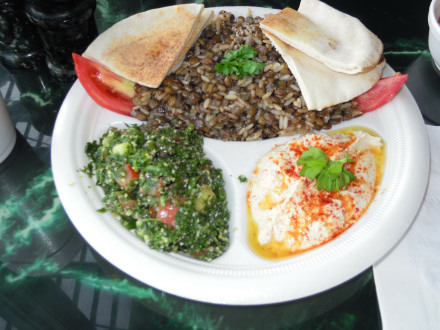 A Lentil and Rice Pilaf Plate is also available from the vegetarian menu. Although I think it is excellent, the hashwa plate (with meat) would be my normal choice instead of this one. 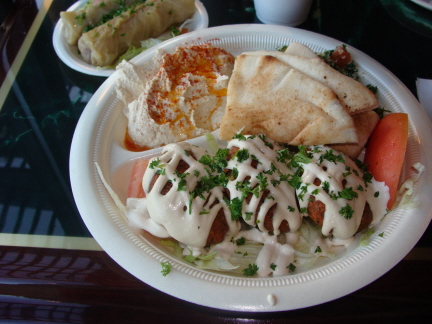 The Falafel Plate is another good vegetarian choice. However, I usually go for the falafel sandwich because it has more sauce and I think a better flavor combination. 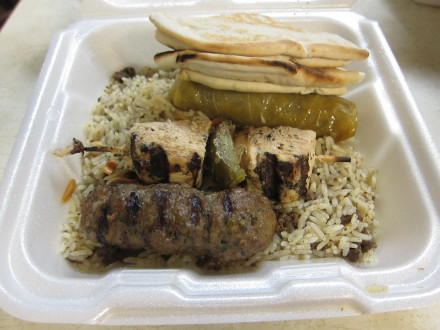 I would say that most of the best items at Nunu’s are on their “Specialty Plates” sections of the menu. Just about all of them are on the Sampler Plate, which includes hashwa, chicken kabob, beef kafta, and a cabbage roll (with a side of tabouli, hummus, and pita).

Beef Kafta is very flavorful and has always been a standout item. One of its best features is the excellent spicing.

The Chicken Kabob was not always my favorite meat item here, but recently it has been perfectly cooked with excellent quality meat. It has enough seasoning to make it appetizing but not so much that I feel that I am being overwhelmed by garlic and other spices. I would rate it as being almost as flavorful as the kafta, but in terms of meat quality it is the same. 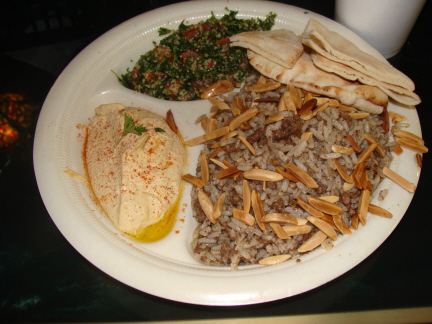 The menu has described Hashwa as Nunu’s signature dish, and it is used on many plates as a “bed” underneath a meat item. It consists of rice and beef cooked with clarified butter and topped with toasted almonds, but I think the spices and flavors in it are much more complex than this. A Hashwa Plate, as shown in the above photo, is also available. 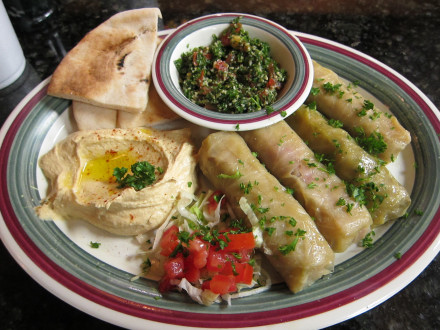 I have to rate the Cabbage Roll made with beef, spices, and clarified butter, as one of the best items at Nunu’s (I know I am creating somewhat of an endless list of best items, but the cabbage rolls should be included as well). These are not only good, they are the type of cabbage roll that will make me want to return whenever possible for a “fix.” A slight sour taste makes them seem a little like German style food, but the mixture of spices is an excellent representation of Middle Eastern cooking. 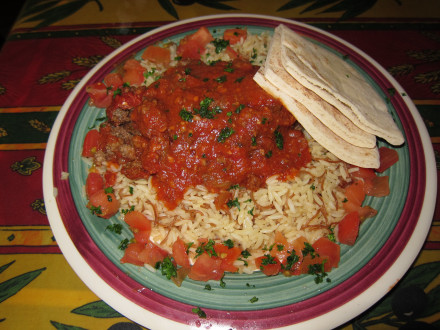 Eggplant casserole served as a special

Nunu’s used to have a regular schedule of daily specials where I would go on certain days just to get the Eggplant Casserole, a true home made dish which I think Janet made in her own kitchen. After Janet left I no longer found a regular schedule for these special dishes, although some specials are still available. 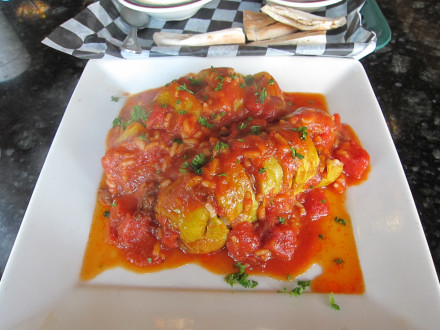 A daily special I found in 2020 was Cousa, a dish of squash with tomato sauce stuffed with ground beef. This had many of the same elements as the eggplant casserole, but with a different vegetable (and it was not served on a bed of rice. In terms of flavor it was as good or better than the eggplant.

My advice about this “casserole” type of daily special is that they do not have a photo of it and sometimes you do not really know what you are getting before ordering, but I have always found them to be quite good and many times to be truly a special experience. 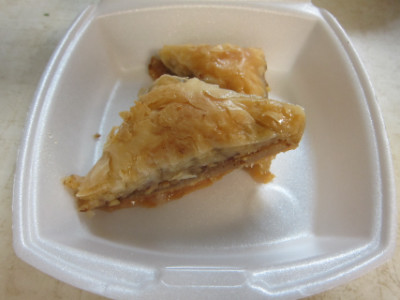 I believe Nunu’s always has two kinds of Baklava, and I sometimes notice other desserts available as well. This is one of my favorite versions of baklava in the city. (Note: they sometimes run out during evening hours).

Other Notes
I should point out that there are some other Lebanese restaurants in Oklahoma City, including Camilya’s and Jerusalem (in Edmond). All of them either have items that the others do not or they do certain items better than the other restaurants. In most of the cases the items I have identified as a “best item” at Nunu’s are also my favorite in the city, but  this is not necessarily the case for meat items (all three of these restaurants are excellent for this).