Naan Cuisine has one of the most extensive menus in town for Indian food, and many of the items are ones I have not seen on the menus of any other Indian restaurants. A Yelp commentator mentioned that Naan brought in a chef from Chicago whose specialty is South Indian food. Many of the menu items are from Kerala state on the southwestern Indian coast, but other areas of India are represented as well.

Naan took over the space formerly occupied by Ajanta Indian Restaurant, and some menu items have been carried over from the Ajanta menu (including channa masala which I have tried at both the old and new restaurants). Ajanta mainly served north Indian food, and with the southern Indian dishes that have now been added (including a large variety of dosa), it seems that it now has a very good sample of food from all over India.

I will give a spoiler alert and say that I have really liked everything I have tried here except for the dosa. There was an Indian restaurant in El Paso that specialized in dosa, and I really liked the way they did it. The dosa at Naan did not quite meet my expectations, and I do not know if it is because I tried the wrong one, whether the styles are different, whether I was having a bad day when I tried the one from here, or whether the restaurant was having a bad day. In any case, I consider this an outlier because everything else has been excellent. 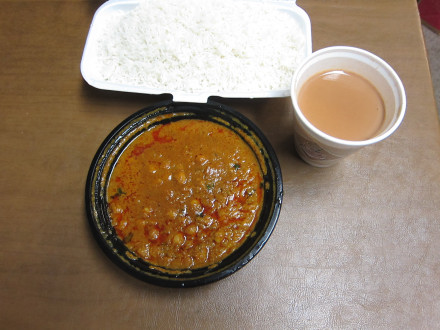 The Channa Masala was excellent, as it was at Ajanta which was previously at this location. The sauce was excellent with a rich flavor, but one thing I really noticed was its texture. The chickpeas were soft and cooked to a good consistency (I think some restaurants may undercook them but also I read that there are different varieties of chickpeas that can be used).

The food here comes with a huge portion of rice so that there is really no doubt about getting full, even if you order vegetarian dishes as I usually do. 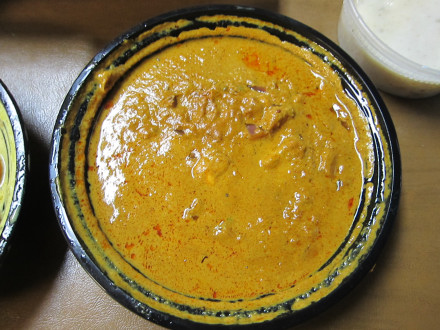 Varutharacha Paneer Masala is one of the restaurant’s South Indian specialties, although it is listed simply as one of the “Veg Specials.” This is a paneer with fried coconut masala, spices and herbs. I will have to say that this is a very special kind of masala, with a complexity of flavor I have not found in other masalas. I would not say that overall it is better than the Channa Masala, but the masala has a different flavor and this dish is certainly spicier than the channa masala (I believe I ordered the varutharacha masala “medium spicy” but that this was not passed on to the cook so it came at the default “very spicy”).  I was happy with the spice level and it seems best to just let the cooks prepare the food the way they would like to do it. The main reason the channa masala is competitive with this dish is that I really like the chickpeas. 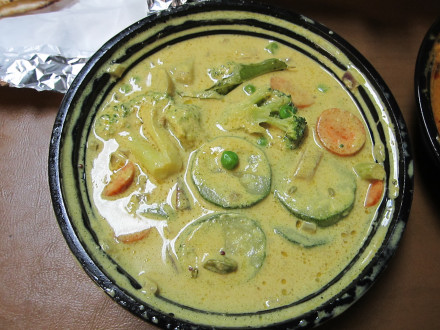 I could not say that the Kerala Veg Stew was really any better than other dishes I have tried here, but it was better from the standpoint of certainly being one of the best green curry dishes I have ever tried. These were mixed vegetables cooked in coconut milk, and I was very happy with the way they did the dish. This was not as spicy as the varutharacha paneer masala, but it was more spicy than the channa masala (again I think the spice level was done at the default level for this dish)..

Between the time I ordered this dish and the time of doing this write-up (both in December 2020) they have taken the dish off the menu. There is still a “Kerala Chicken Stew” on the menu, however. 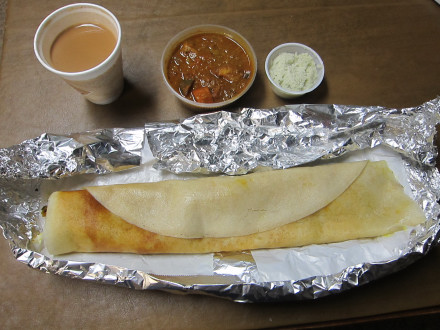 There was a restaurant in El Paso that served the best dosas I ever had, so I became spoiled. I was a little disappointed with the Masala Dosa here mainly because there was not much to it. There was just a little bit of filling inside and it did not have much flavor because of its small quantity.

The really great thing about the dosa, though, is that it comes with sambar and coconut chutney. Sambar is a lentil based vegetable stew which you put inside the dosa and therefore there is actually a good flavor to the dosa (but I do not think it is as flavorful as the ones I tried in El Paso and other cities).

The Coconut Chutney, though, had a truly excellent flavor–so much so that I was craving it the next day (and fortunately I had some left over that I did not put in the dosa).

Something in the dosa had a cumin flavor which is one reason I do not rate it as high as the ones I had in El Paso. I know that the chutney was not the culprit, so it was either the sambar or the dosa itself (some may hold a different opinion about cumin but I do not like it when the flavor is so pronounced). 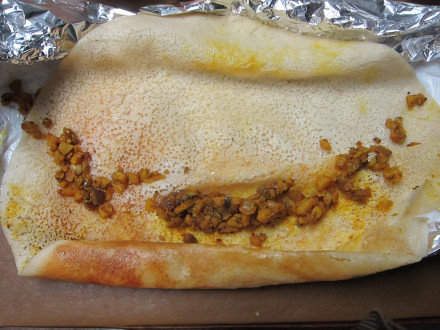 Inside the masala dosa

This photo shows what was inside the dosa (it consists of lentils, potatoes, and onions). This is the way dosa is supposed to be made, but just be aware that these dishes are not as filling as others on the menu. 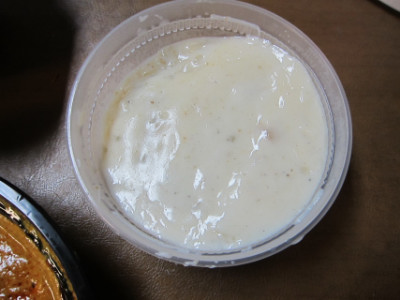 The Kerala Payasam is made with milk, vermicelli, jaggery (sugar) and spices. Several other desserts are also available. This and rasamalai are both milk based, and I think are effective for cooling down the mouth after eating spicy food (but really all the Indian desserts are designed to do this). I do not know of any other Kerala style Indian restaurants in Oklahoma City, though, so to me it was worth trying the Kerala payasam (it was very good).

Drinks
The Masala Tea was very good, with the right spices.

Other Comments
I think one reason the name of the restaurant is Naan is that they have a large selection of naan and other breads. There is also biriyani and other items that I think are typical of South India. The South Indian items are mainly mixed in with the dishes from North India in the various sections of the menu (beef, chicken, goat, lamb, seafood, and vegetarian). I think the staff can be a good source if you want to identify the South Indian items.

I think the dishes from northern India that have been carried over from the old Ajanta Restaurant are excellent as well (channa masala being an example). What makes the South Indian dishes more exciting to me, though, is that many of them are items I have never seen on any restaurant’s menu, and being as good as they are is an extra benefit.

South India has the largest concentration of vegetarians in the country, and thus is known for its vegetarian food. However, Kerala state is also known for its seafood, and the Sea Food section of the menu might be something that would especially be worth checking out.