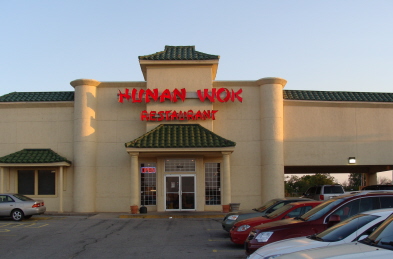 Hunan Wok is now one of the city’s longest running Chinese buffet restaurants, a concept which was popular in the 1980’s and 1990’s, but which is now mostly being replaced by restaurants where you order from the menu (and which many times offer lunch specials). Hunan Wok has a menu, and menu prices are very reasonable, but few customers seem to order this way. 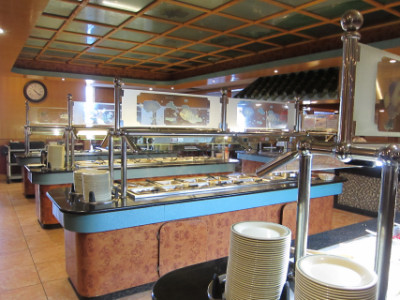 Hunan Wok underwent a transformation when it reopened in February 2011 after an extensive remodeling of the building. The buffet now has many more choices (and offers a good assortment of American food to go along with the Chinese dishes). I have not eaten from the buffet since before the remodeling, but my favorite feature of it was the Mongolian barbecue (and this is still available on the new buffet). The new buffet has higher prices, but the larger selection is a good feature if you are really hungry.

The biggest change from the “old” (pre-remodeled) restaurant that affects me is that the special order Chinese dishes I used to get are no longer available. These were items that were not on the menu or that had to be modified, and I believe the cooks who prepared them are no longer at the restaurant.

There is some hope, though, for people like me who enjoy a more authentic Chinese taste than is the case with most Americanized dishes. The waitresses are Chinese, and when I visited in 2020 they made some good suggestions that helped me find the right thing to order. They suggested that there are certain dishes that are more Chinese style and/or have vegetables that are more Chinese style. Whether the strategy is to find a menu item with a Chinese flavor (as I did in 2020) or ask for modifications to a dish (as I have done in the past), I am confident that you will at least know what you are getting, and that they will make every effort to find something that is close to what you want. 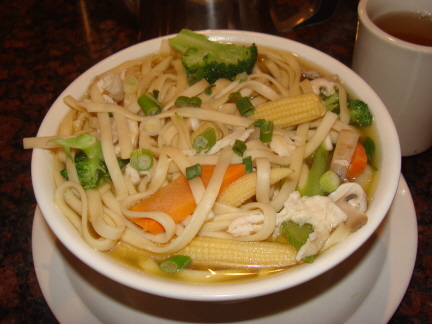 Noodle Soup was one of my favorite “Chinese style” items before the remodeling, but now it is just a big bowl of soup without much flavor (or at least it did not have much flavor when I tried it). It is cheap, though, and contains a large amount of chicken, noodles, and vegetables. There are quite a few Chinese restaurants that have better noodle soup in my opinion, but at least the one here is a good price and has all the basics I need. 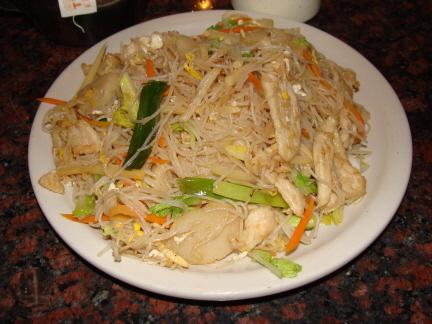 I have tried two versions of Mei Fun (rice noodles), and on one they honored my request to use Chinese vegetables. This one was a pretty good choice for me, although I am not sure that it is something they are always willing to do (on a visit in 2020 the waitress told me that the bean curd home style would have more Chinese vegetables than the mei fun). Thus with the mei fun I would advise asking questions to see if it will be prepared the way you would like. 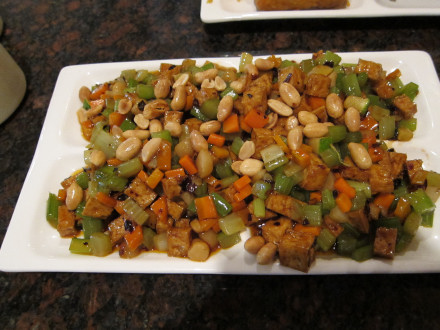 Hunan Wok got points with me for offering Kung Pao Tofu, although I did not see it anywhere on the menu when I went in 2020. The one here was heavy on the celery but otherwise I liked the vegetable selection. If I were rating the different parts of it I would probably give a 5 to the tofu, a 4 to the sauce and the peanuts (because there were not enough of them), and a 3 to everything else (the squash was good but is probably not something I normally associate with kung pao). For me this was better than average “Americanized” Chinese food. 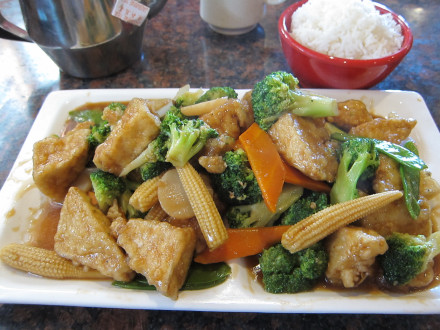 When I visited in 2020 the waitress thought the Bean Curd Home Style would be a good choice if I wanted Chinese vegetables (versus the mei fun). The vegetables included water chestnuts, baby corn, as well as the more American style broccoli and carrots. Overall it was very good, quite filling, and was at a good price. The best feature was probably the tofu, which was slightly crispy on the outside with a good texture and flavor on the inside. I do not always think tofu makes a good meat substitute but this one does.

The brown sauce also had a good flavor although the staff told me it had MSG (I did not think the MSG content was very high). White sauce is also available.

Additional Information
The times I ate from the buffet at the “old” Hunan Wok I was happy that it was MSG-free (and I believe it still is except that there is a little bit in the brown sauce). A selling point is that it has items such as roast beef, but the Chinese items I saw recently were largely fried and/or Americanized. I think that those who want more of a Chinese flavor should probably make use of the Mongolian barbecue.

A review of the old restaurant is available as an Archived version.

Most Recent Visit: Dec. 22, 2020
Number of Visits: 6
Best Items: Bean Curd Home Style, Mongolian Barbecue (but I have not tried it recently to verify that it is still good)