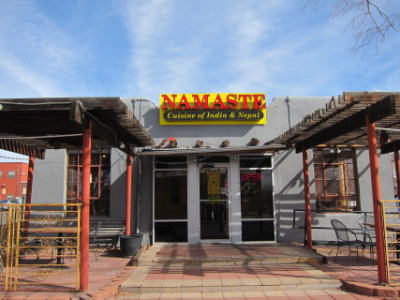 Namaste near the UNM Campus

Also, I have had chow chow in two Himalayan restaurants in Oklahoma City but I still think the one from here is the best.

Although I had a wide choice of Asian restaurants near the University of New Mexico Campus for lunch on Saturday, a tight time schedule caused me to go to one of the places that was most visible and which involved the least travel. Namaste turned out to be an excellent choice both for the food and for quick service. It also allowed me to sample a cuisine I had never tried before, namely Nepali (served here in addition to Indian food).

Albuquerque seems to be a hotbed of Asian food, and I know from both Yelp and Gil’s Thrilling and Filling Blog that many of them are ones I want to try. Many of the best ones seem to be near UNM and along Central Avenue, and hopefully I will be able to make other trips to sample their food as well.

The main downside to Namaste seems to be the logistics of going to it. There are a few parking spaces behind the building along the alley that are reserved for restaurant customers, but if they are full I think people may be out of luck as far as parking is concerned. The restrooms are down a flight of stairs in the basement so it looks as if the restaurant is not accessible, but I do not know if they have other arrangements.

At first I was tempted to try the Indian buffet which they have on Saturday, and the price was right for this. On second thought, though, I saw some Nepali items on the menu and ordered one of these instead. I cannot give a full report of the food served here, but I was very satisfied with what I got. 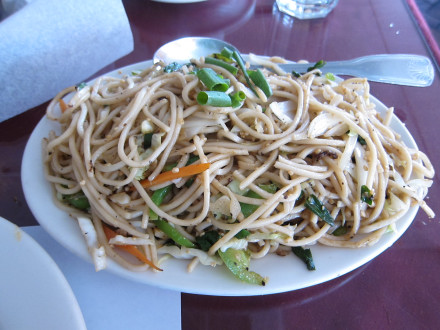 Chow Chow was one of about six items available from the Nepali menu. My choice was affected by the fact that it is their cheapest Nepali item and also the one that can be prepared most quickly, but I certainly was more than happy with this choice. I commented to the waiter that it looked like Chinese food, and he said it was cooked with soy sauce. It even tasted like Chinese food, which to me was a very pleasant surprise. I have had many Indian style “Manjurian” Chinese dishes which were spicy and had mostly Indian flavors rather than Chinese, but in this instance I was glad the Nepalese have a different cooking style.

The Chow Chow was not spicy and had slightly different flavors than the Cantonese food with which I am all too familiar, yet I think it could be served at Cantonese restaurants and people would think it was authentic. On line recipes for Chow Chow indicate that it always has ginger, garlic, and soy sauce. Unlike most Chinese dishes, though, it also includes turmeric (an ingredient of many curries but this dish did not have curry). This was a vegetarian dish, and the vegetables mixed into the noodles gave it added flavor.

The waiter told me Chow Chow was on their buffet on weekdays but not Saturday (the buffet looked rather small and there were only a few customers at the restaurant). For other Nepali dishes, though, I think you have to order them from the menu.

Indian Food
Although I did not try the buffet I saw some of the items they had, and they looked good. They seemed to be predominantly meat items, and they had several types of curry and sauces.

There is also quite an extensive choice of Indian food on the menu (unlike the Nepali menu which only lists about six items).

Other Comments
For me this restaurant was a good choice–I not only enjoyed the food but it made me want to come back to try other things.

The Chai was good, and is definitely what I would order if I go back.

Chow Chow seems to be a simple dish which they made more complex through its flavors, and because of this I have high expectations for other dishes I might try here.

There is another location in Rio Rancho (where I expect parking will not be as much of an issue).