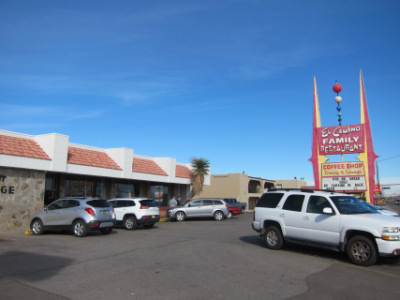 I have been aware of El Camino at least since the 1980’s, and it probably was operating long before then. In fact, I would call it a 1950’s style diner like the kind that used to dot the highways as people traveled anywhere in the country. This one, though, has the added feature of serving local New Mexican cuisine which has usually been the attraction to me (I listed that I have been here twice but the number may actually be much higher from the days I did not keep track of the places I ate).

The restaurant is open 24 hours per day, and you can order breakfast any time. Most people sit in booths unless you have a large party (and then tables are available). Even though the restaurant is a little dated it is very clean, and it always seems to have people coming in for coffee even if they are not ordering a meal. 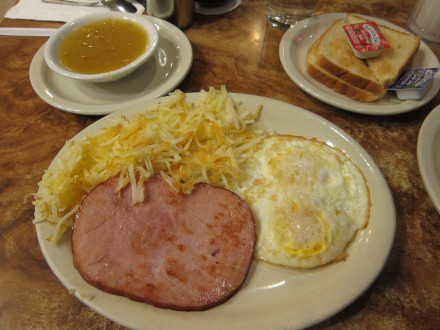 Eggs, ham, and hash browns with a bowl of green chile on the side

As far as breakfast goes, it is pretty much like breakfasts you get in diners anywhere. Everything was very adequate, but the hash browns were some of the best I have ever had. Other than that, I think most people will like the food but it was not very notable to me. 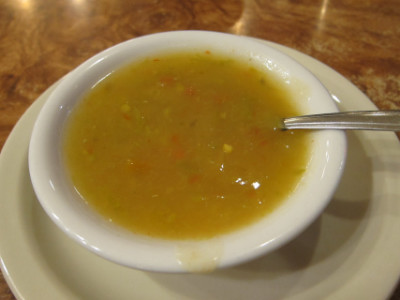 The one caveat, though, is that I think the breakfast must be accompanied by a complimentary bowl of green chile. This is not salsa, but the standard green chile they put on enchiladas. It also turns eggs into something I think is as good as huevos rancheros, if not better than most that I have had.

Everything I tasted made me want to come back and try their New Mexican food (actually I have had it before but I do not remember the specifics of it). The really big selling point here is the green chile, and probably the red chile also.

I asked for the bowl of green chile (they do not bring it automatically with breakfast orders). Since it is free, though, it is definitely worth a shot.