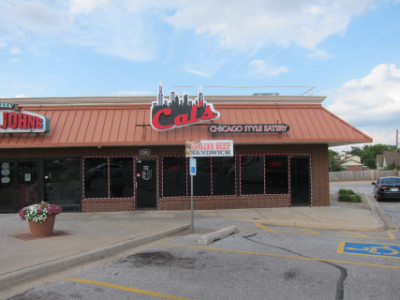 In my several trips to the Windy City my food experiences mainly revolved around eating food that I could not find elsewhere (such as their version of pizza) or food that was better than elsewhere (such as German, Chinese, Thai, etc.). By accident I even found Billy Goat Tavern which was the inspiration for the Saturday Night Live skit where the only thing on the menu was “cheeseburger, cheeseburger” (in real life they have other things including breakfast, a hamburger without cheese, and the types of sandwiches served at Cal’s Chicago Eatery in Oklahoma City).

Gil’s Thrilling (And Filling) Blog for Albuquerque and Greater New Mexico includes an article on AK Pizza, a restaurant very similar to Cal’s except that it also has pizza. Gil gives a full description and analysis of the sandwiches which form an important part of Chicago cuisine including the Chicago hot dog, Italian beef, Italian beef and sausage, and Polish sausage. These and other sandwiches (including a Philly sandwich and gyro sandwich) as well as hamburgers are available at Cal’s.

I am relying on Gil’s review to provide a description of some of the items because until I ate at Cal’s I was totally unfamiliar with them. I have independently reached the same conclusion as Gil that these are some of my favorite sandwiches. I am not sure if the owners of Cal’s in OKC and AK Pizza in Albuquerque know each other, but their food styles are both done in the “Chicago way.”

Cal’s is a small restaurant with only a few tables, and the food is packaged in such a way that I think it will be equally fresh whether you eat in the restaurant or take it home (they do serve dine-in customers if you wish to eat at the restaurant).

Even though the restaurant is fast food style where you order at the counter, I found that the food is of a higher quality than outward appearances would indicate. 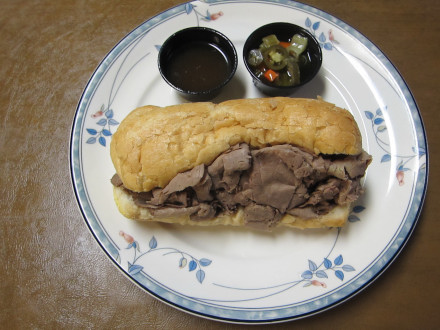 The Italian Beef Sandwich received such good reviews on Yelp and other web sites that this seemed to be a no-brainer for my first order. However, being a novice at Chicago style sandwiches, I was presented with a choice for which I did not have an immediate answer. The owner (Cal, I presume?) told me that there were two toppings available for the sandwich–a spicy and a non-spicy one. Since he offered to give me containers with both sauces, this solved my dilemma.

Gil’s Thrilling (And Filling) Blog in the article about AK Pizza in Albuquerque explains that the non-spicy sauce that goes with this sandwich is called gravy (au jus) while the spicy one is called giardiniera. Based on Gil’s description it seemed that Cal’s sauces were prepared the same way, as they are at probably any “Chicago style” restaurant.

The option I enjoyed the most was the au jus, a very flavorful sauce that was great for dipping and which made the sandwich remind me of the French dip sandwiches which I have not had for a while. Because I was very picky about French dip and only wanted the best ones, I was immediately aware that Cal’s lives up to the same high standards that I seek for this dish.

As for the spicy sauce, I only tried it on a couple of bites because I was so excited about having a very good “French Dip.” Gil indicated that he likes the sandwich dipped in the au jus and then having the giardiniera put on top, but I was fine with being able to experiment with it (and it is good to know that there is a choice of sauces).

I should also explain the the giardiniera had the level of spiciness you get from jalapeño (although I do not know what kind of chile is used). If any readers have had the spicy relish served with chips at San Marcos or other Mexican restaurants in town, the giardiniera tasted much the same to me. 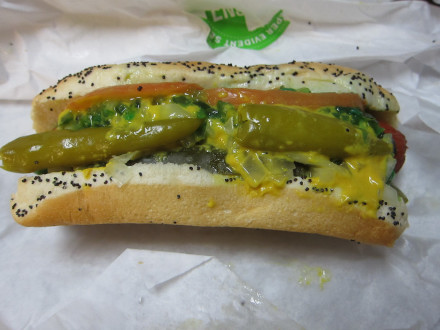 The Chicago Dog is 100% beef with tomatoes, onions, mustard, relish, sport peppers, and a kosher spear on a poppy seed bun. Apparently it always has these ingredients no matter where you order it, and I am definitely a fan. I would say the best features of Cal’s version were the meat and the relish. The meat was devoid of any colors or textures I sometimes find in hot dogs that make me wonder what I am really eating. The relish was notable because of its particularly good flavor. 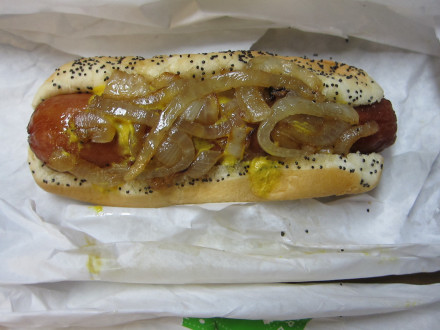 The Polish Sausage is likewise a sandwich which I would very much like to order again. I thought of it as being like a very good bratwurst where the cooking style eliminated much of the grease but kept the good flavor. The mustard here is not spicy like German mustard, but with the grilled onions it had it own memorable flavor that made this one of the better sandwiches I have had. 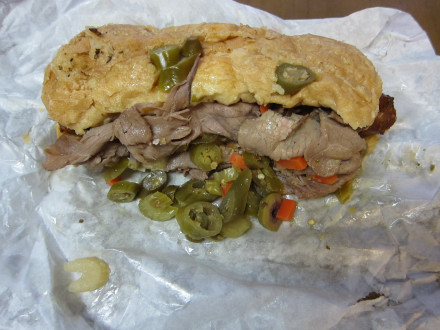 At Gil Garduño’s suggestion I tried the Italian Beef and Sausage Sandwich (actually it was already on my list as the next thing to try). On this one I went ahead and ordered it with the giardiniera sauce on it, and this is done after they have already soaked it with the non-spicy gravy. A portion of the sausage is visible behind the beef, and they are positioned side by side so that you get the two flavors together. This is like having the best of both worlds (Italian beef and Polish sausage together), and I thought the spicy giardinera was an excellent flavor enhancer. I definitely liked the giardinera on this sandwich (while with the Italian beef sandwich I still think the au jus might be the best choice).

Side Dishes
The large sandwiches (Italian beef or Italian beef and sausage) are just about filling enough to be a meal in themselves, but with some other sandwiches I would definitely want a side with it. The French Fries were in the sweet spot which was neither too greasy nor too dry. I thought the seasoning they used was a definite enhancement.

Other Comments
Although the main items here are sandwiches, these are definitely better than the average sandwich. The Italian beef sandwich had a grade of meat that almost made it fine dining (I hope it is not considered heresy to say such a thing about Chicago style food). With the Chicago dog and the Polish sausage, the key is the overall flavor with all the ingredients it contains. However, it is also that these are not “mystery meat” as I sometimes experience with sausages and hot dogs.

It is really hard to determine which is my favorite sandwich here, but I do think that the Italian beef and sausage has a flavor that is not likely to be duplicated anywhere else in Oklahoma City, and from this aspect I would recommend trying it. The giardinera sauce is quite spicy, but it is not as noticeable because it also has the au jus and quite a bit of meat and bread to tone it down.