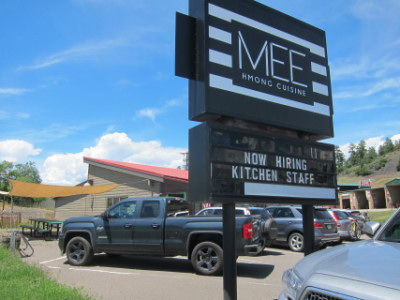 Update: The restaurant is reportedly closed as of Sep. 2021

The Hmong people (pronounced “mung” according to the restaurant owner’s message on Yelp) are a large ethnic minority in Laos, and also live in Vietnam, Thailand, and China. The Yelp information describes the typical Hmong meal as including “a simple soup, boiled vegetable, rice, and a spicy pepper sauce for dipping.”

I had never tried Hmong cuisine before, but the Lao and Thai food I have experienced have included the fresh flavors of simply cooked food, the spicy flavors of curry and Lao salads, and the pungent flavors of fish sauce that seems to be particularly popular in Laos. I was imagining something like this for Hmong food, but I think MEE has made it somewhat less intimidating and focused on the “fresh” part but leaving out the fish sauce and other flavors with which most Americans are not familiar. The restaurant’s web site says it is “Contemporary Hmong Cuisine” and that it is “Asian Fusion” food.

I want to tell readers that I loved the food here, and I recommend that others try it when they are in Pagosa Springs. I just could not figure out, though, whether this is authentic Hmong food. I had a ginger stir fry dish that had great ginger flavor, so the Asian influence comes through with the food. The Asian practice of eating things that are fresh is also evident here, with the ingredients tasting as if they are natural and organic. The spiciness is something you add yourself by pouring the spicy sauce on top of the food, but it is not the Lao level of spiciness that I have experienced in other restaurants. I did not care, though, because the flavors were so good. 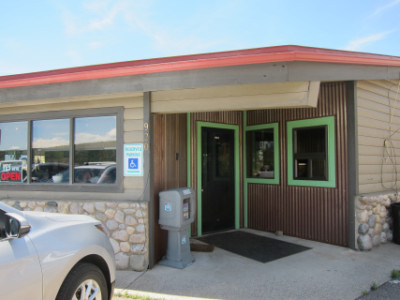 The building is fairly small, and you order at the counter. Table space is limited, but I was there in the summer tourist season and there were a few tables available. Prices are a little high, but I got full from the meal that was served. The main reason my meal was higher than normal was because of the “Premium Iced Teas” that they serve, but I do recommend getting them.

The Menu
Most of the dishes come with Meechi Salad, and most come with rice as well. They serve several types of meat, and for many dishes there is a choice of getting meat or tofu. The restaurant’s web site says their food is “fusion,” and this is clear by menu items such as meatball curry and bangin’ tacos. The bangin’ pork and bangin’ tacos (two items that seem to be a fusion of Asian and Mexican food) are some of the most popular items by many reviewers that I have seen. 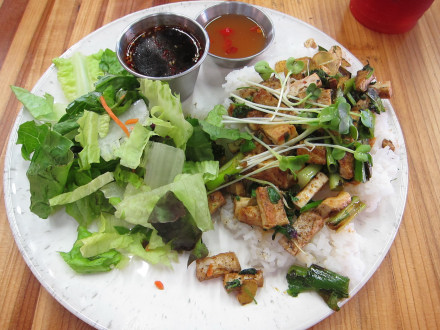 Most menu items include a main dish and the Meechi Salad, such as the Stir Fry Ginger shown in the photo. On this dish you get a choice of pork or tofu (mine was tofu). It comes with a salad dressing (the dark sauce) and a spicy sauce for the main dish (the light colored sauce). The ginger taste was very strong, but it was balanced by the food on the plate as well as the sauce. In terms of flavor this was one of the best ginger dishes I have ever had (ginger tofu was my “go to” dish at many Thai restaurants in Seattle that I tried).

The sauce was not terribly spicy, and it had no hint of the fish sauce I normally associate with Lao style food. I believe this was an effort to present this food to the mass market rather than because Hmong food does not use fish sauce. However, both the stir fry ginger and the salad were so good, it is hard to argue with what they are doing here. The spicy sauce had really balanced and good flavors, and they did an excellent job with the ginger flavor on the dish.

The Meechi Salad had fresh greens and a very flavorful dressing, so this was a part of the meal that I did not expect to be as good as it was. 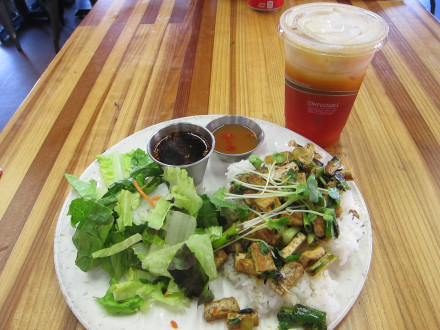 This photo shows the Hmong Iced Tea, a drink which is very similar to the Thai tea served in many Thai restaurants. The tea served here is slightly sweetened, infused with coconut milk, and is vegan friendly (according the the restaurant’s menu). Any time they can make it taste as good as Thai tea but be more healthy at the same time, I am all in favor of this. The price was not very much higher than I normally pay for Thai tea in Thai restaurants. 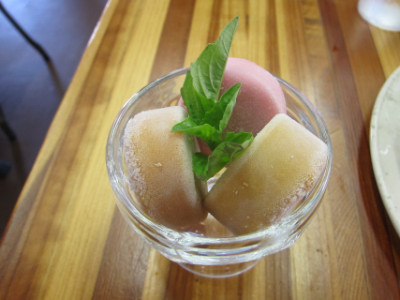 I had read so many good reviews of the Mochi that I had to try some, even though I was already full from the meal (but I got it anyway because I was able to split it). Mochi is ice cream wrapped in rice cake, and it obviously was not meant to be cut in two but we did this anyway just so we could try it (the ice cream starts melting on the plate before you have a chance to take a bite). It comes three to an order (you cannot order them individually). There is a large choice of flavors, but several of them were not available when I went. For the record, the three in the photo are Thai tea, raspberry crunch, and pistachio. I do not think it matters which flavors you order because all seemed equally good.

Other Observations
Many times I think restaurants do not give customers enough credit, and they Americanize the food without giving them a chance to see if they would like the authentic version. In turn, though, I like to extend the same courtesy to chefs to see if they can create something more flavorful, more healthy, etc., than would be found in the traditional form of their homeland’s cuisine.

I do not know how Hmong food is supposed to taste because I have only had it at this one restaurant in Pagosa Springs. The chef has apparently created a “fusion” version, and normally I cringe at fusion food because it does not have a good result. Here, though, I very much like what the restaurant has done.

The ginger stir fry dish had very good Asian flavors, and everything was well blended without it being dumbed down. I am not sure I am ready for an Asian taco (the Bangin’ Taco), but it seems that if any place can pull it off it would be MEE Hmong Cuisine.