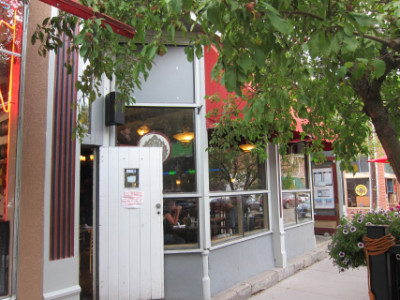 Salida was quite surprising to me when I visited this time. I had been here a number of years ago and the town did not seem to have grown physically at all in this time. However, in terms of people, life in the city, restaurants, shops, etc., it was a different story. This seemed to be one of the liveliest towns of its size I had ever seen, and I do not think this can be attributed merely to the summer tourist season. The restaurants in town all seem to be high quality, and I would use the term that there seems to be a refined crowd here hoping that this would not be interpreted as saying that it felt stuffy.

Currents is located in the downtown area in an older building where parking is on the street and the demand for the parking spaces there is very high. I am not sure if the restaurant is handicapped accessible because there were steps coming in, but if you need to know it would be best to contact the restaurant. There is a small outdoor patio next to the street, but even indoors it seemed that you could feel the outside air because the doors were kept open (similar to the way many New Orleans restaurants are open to the street during the cooler non-bug season). 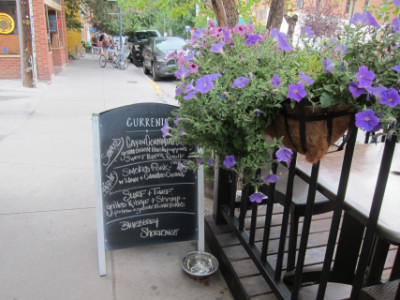 Specials board next to the outdoor patio

I think the restaurant is known for its steaks, but just about every review I have read has been for the non-steak items on the menu, of which there is a large selection. I came specifically for the chicken pot pie and my friend wanted the beef stroganoff, both of which have had very good on-line reviews.

They do have daily specials, and the menu is available on the restaurant’s web site. 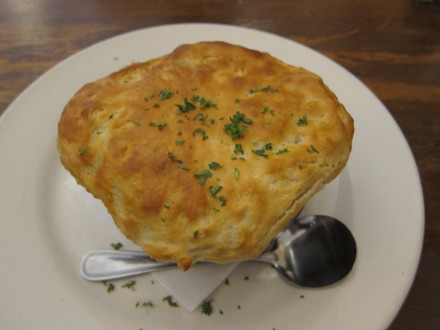 The Chicken Pot Pie may be shaped like some sort of space rock, but it met all of my expectations when it came to the flavor. The chicken pot pie as it has now evolved is said to have been developed by early Americans, and I think one possible motive may have been to hide the vegetables inside the pie in order to trick the children into eating them. The pie at Currents is so full of vegetables, chicken, and other ingredients, though, that simply cutting it open will reveal all the good things that are packed inside. After most of my recent experiences with chicken pot pie being the “creative” variety, I was very glad to have one that was more traditional. They did add a spice that tasted like basil to me and I would call the flavor “elevated” (a term they like to use on Master Chef), but in its essential form I would say this pot pie is the traditional one that most people expect.

The bad news about this pot pie is that it now seems to have been taken off the menu. At the time of this writing (about two weeks after I visited the restaurant) the web site menu lists beef steak pot pie, but there is no chicken version. I am sure the flavors are still good, but personally I would not crave a beef pot pie the way I would if it were chicken. 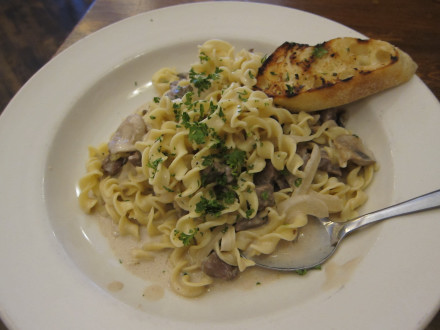 The Beef Stroganoff may have been my second choice for an order, but since I was able to sample it, I ended up being able to see how it stacked up against the pot pie. It is hard to tell from the photo, but this dish was full of mushrooms, and also had more beef than I think the photo indicates. I had a mushroom stroganoff in a now closed restaurant in Walsenburg, Colorado which was one of the best meals of my life, and I was wondering how this one would compare. I will have to say that if I had ordered a mushroom stroganoff here (which the restaurant will do on request) I would have been disappointed. When I ate the pasta, sauce, and mushrooms together on this dish it did not have the flavor that I really wanted, and I think the main reason was the sauce. When I added the beef, though, this dish became “elevated” and it met my expectations. The beef does seem to be quite flavorful and well cooked here.

Recommendations
I would choose whatever looks good at the moment when you come here. The menu has good choices, and the quality seems to be good in everything they prepare.

One factor to consider is that Salida seems to have a number of good restaurants. If I went back and found out that the chicken pot pie is indeed no longer available, and nothing else looked like what I wanted to eat, I think there would be no problem finding another restaurant. I do think, though, that Currents has a number of dishes that will make people happy.