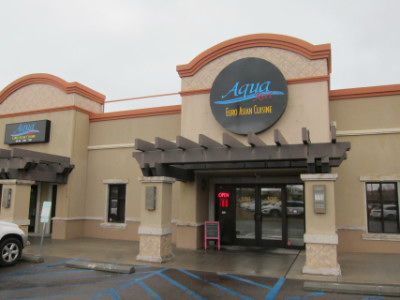 When I took some night classes at New Mexico State University I used the opportunity to sharpen my work skills as well as do a systematic sampling of the restaurants in Las Cruces. While I had a good excuse to try many new restaurants, I also became a frequent customer at some that had already been my favorites. At the top of the list was Tatsu Japanese Restaurant operating out of a building which appeared to be a converted coffee house, but which provided a cozy setting for some great food.

When Tatsu closed I thought good Asian food in Las Cruces would now be extremely limited, but it turned out that Chef Tatsu Miyazaki was really just beginning his ventures in the restaurant world. Aqua Reef, opened in 2008 on Telshor and now at the new location, continued the Japanese cuisine formerly served at Tatsu but which has now been expanded to “Euro Asian fusion.” Although I have seen the word fusion used to describe the restaurant, this is somewhat of a misnomer because the Japanese food seems to be as authentic and true to the Japanese tradition as I found at Tatsu Restaurant. They have added other types of food to give diners more of a variety, but the heart of the restaurant is still Japanese (the sushi selection has also become quite extensive).

Before I give my observations about the food I probably need to address the issue of the prices. It is expensive for Las Cruces, but the food is from a renowned and much awarded chef–the type of food you might expect to get in places such as Las Vegas (in fact Chef Tatsu was a chef instructor at the Cordon Bleu College of Culinary Arts in Las Vegas). Aqua Reef does not have lunch specials and it is more expensive than other lunch choices for sure, but I think it is far less expensive than similar food would cost in larger cities. This is a special occasion restaurant, but the prices are such that you can enjoy the “special occasions” much more frequently than you might think.

My natural inclination is to try to save money, so I had to make a choice here about what to order. Salmon is usually my preference for Japanese lunches, but it is more expensive than other items (and other choices such as chicken were already more expensive than at other restaurants). Once I decided to get what I really wanted (the salmon), I also had the choice of their regular tea or an upgrade to the Té brand (this was recommended by the waitress). I will just get to the point and say I think it was a good choice to go with the more expensive option on each one, and I think my money was well spent for the experience I had (the lunch in 2018 cost about $20 for both food and drink).

My opinion is that it is well worthwhile to splurge here. If you want something less expensive such as the chicken, that is worthwhile also, and was my go to dish at the old Tatsu Restaurant that I enjoyed so much. This does not have to be your most expensive meal in Las Cruces, but if you choose to spend the money you will get a very good meal. 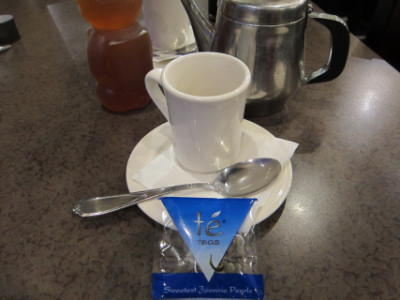 The Té brand tea is an upgrade from their regular tea. Since I did not try the regular tea it is hard to compare them, but I was very happy with the more gourmet version. The bag is full of loose leaves which you dip in the teapot. The result is a brewed tea that you make yourself (and the leaves stay inside the bag). They have several flavors of tea, some of which would go better with the “Euro” side of the menu. 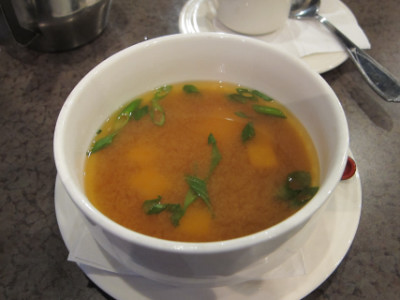 My meal came with a choice of miso or egg drop soup, and of course I thought the Miso would go better with a Japanese meal. The miso was so rich and flavorful it made me think that many others are actually watered down, and that this is the way they would do it in Japan (it probably is, but all I can say for sure is that it is quite good). 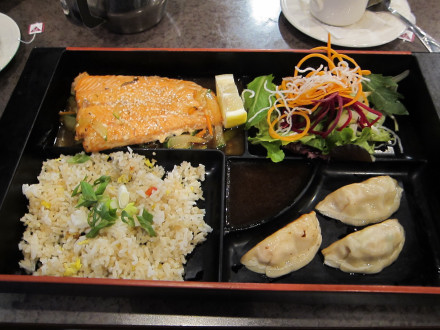 The restaurant does not have lunch specials, but a number of items are suitable for lunch (assuming that you are not trying to get a very large meal). The Bento Box is what I usually like to get at Japanese restaurants because of the fact that there is a variety of items. Salmon Bento Box is the most expensive of the choices, and is the one I ordered. I was happy that they had a generous substitution policy, and one that I made was to get pot stickers instead of the spring rolls that come with the order. I think this was a good choice, although I imagine the spring rolls are quite good as well.

The salmon normally comes with a ginger sesame sauce which sounds very good, but I made a substitution here as well. When I saw “Tatsu’s legendary teriyaki sauce” listed for another item, I requested that this be substituted for me as well. This was my tie back to the old Tatsu Restaurant, although I do not recall ever ordering salmon there. The only thing that surprised me was that the sauce was even better than I remembered, and was far more complex and flavorful than I normally find with teriyaki sauce. I thought perhaps the restaurant made a mistake and gave me the ginger sesame sauce instead, but it did not taste like sesame and I do not think Aqua Reef is the kind of place to make mistakes like that.

The other thing that surprised me (in a good way) was that the salmon was actually red in color. The menu said it was wild Alaskan caught salmon, and the flavor was consistent with this, so the color was not a surprise once I started eating it. The portion size was not huge, but it was pretty substantial compared to the others I usually get in a Bento Box.

Another Take on the Bento Box
On a second visit I also got the Salmon Bento Box but had vegetarian spring rolls instead of pot stickers and the regular sauce on the salmon instead of Tatsu’s teriyaki sauce. The result was that I know I will still have a very good meal if I do not ask for Tatu’s special sauce on the salmon, although I still prefer it with the special sauce.

I also had a different type of tea this time, with the tea in a ball instead of loose leaves–it was very good as well.

Overall Assessment
There is a wall in the restaurant displaying some of the awards and recognition Chef Tatsu has received, and the food fits with the type of information I saw. I read on the Internet (in 2018) that Chef Tatsu recently began management of the Restaurant at Sierra Grande in Truth or Consequences, and he has had several other restaurants in Las Cruces and other cities. I do not know him personally, but I think he must have special pride in Aqua Reef because of the fact that it is primarily a Japanese restaurant. 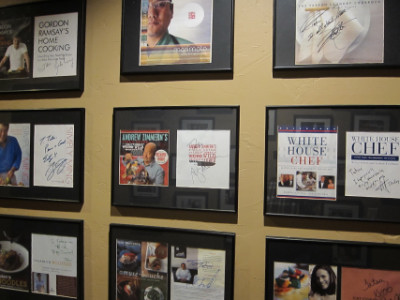 Some of Chef Tatsu’s awards and recognition

The only other comment I want to make is the fact that I have seen mixed reviews of Aqua Reef which held me back from trying it earlier. I am sure many of these people had valid points, and any restaurant is going to have some who like it and some who do not. It is expensive for Las Cruces, but after visiting many other cities I think Aqua Reef is a very good value for what you get. To me the restaurant was not just trying to be upscale, but it was genuinely good and really delivered what I want in a upscale meal. At the same time, though, it was still casual and down home, and made me feel like I was at the old Tatsu Restaurant.

Cuisine: Japanese
Cost: $$ for many items, probably $$$ for most people
Hours: Closed Tue. (as of 2022)
Accessible: Yes
Smoking: No smoking
Alcohol: Beer, Wine 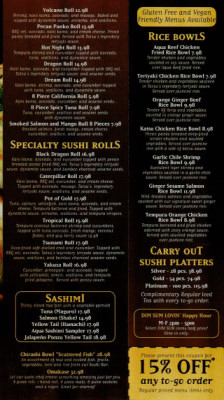 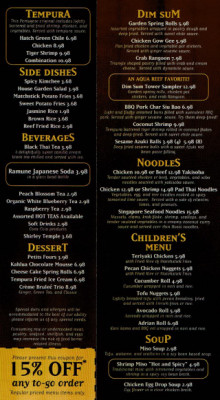