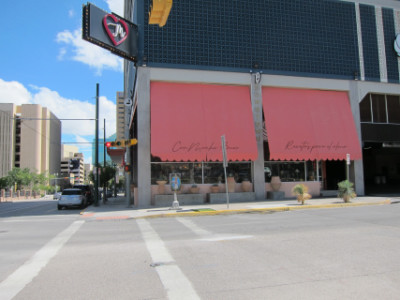 Mamacitas is a restaurant I have been wanting to find in El Paso, without really knowing what it is that I would find when I got there. For years I have known that Mexican cuisine is much more than what is found in restaurants in El Paso or anywhere (with the possible exception of Mexico City). The food in most El Paso restaurants is very good but it is familiar, and very similar to the food in most other restaurants. There is a recognizable Chihuahua style of restaurant, and a slightly modified El Paso style, both of which are not like anything else in the United States or Mexico. There is some variety in the restaurants but mostly it is what could be called “border Mexican.”

What I am talking about with Mamacitas, though, is an elevated style of food that could be called alta cocina, but really I think is more like home cooking when they are trying to prepare something nice such as for special occasions. I have to be a little bit careful in this definition because not all of Mamacitas’ dishes are expensive or ones people could only afford to prepare a few times per year. I am just saying the food here takes you out of border cuisine, but instead of substituting a different Mexican cuisine it gives you a type of food that tastes home cooked, and it would be the kind that is meant to impress your guests.

Yelp calls the cuisine at this restaurant New Mexican, and there is an obvious problem with this because New Mexican cuisine is the local food of the state of New Mexico. Yelp is trying to compare it to the New American cuisine that is found in restaurants throughout the United States, and looking at it this way the food at Mamacitas could be described as New Mexican. It is not the traditional food you usually find in restaurants, but it is rooted in the traditional food.

The restaurant is located in the Hotel Indigo in downtown El Paso, and it provides room service for the hotel. The bar may be more popular than the restaurant, and many of the tables resemble cocktail tables but they also serve for eating a meal. Being downtown it surprised me that the restaurant is open until 10 p.m. every night (but the bar is open until this time as well). The menu seems as if it does not offer a lot of choices, but perhaps after I have tried some other items I will know whether the menu is really as small as it seemed on first glance. I just know that I really liked what I tried, and it makes me want to try other items but at the same time I wouldn’t mind having a repeat of what I have already eaten.

Another aspect of the restaurant that was surprising is the disparity in prices between the lunch and dinner menus. I ordered a lunch item on my first visit which I thought was dinner quality but which was a la carte rather than the plate lunches you get at many restaurants. The “dinner” section has items such as steak and it definitely looks like upscale food. There is no time restriction, and either part of the menu can be ordered any time of day (I am calling it “lunch” and “dinner” but this is not a distinction made on the menu itself). I do think, though, that they have a breakfast menu that is not available later in the day (the restaurant opens at 6:30 am weekdays and 7:00 am on weekends).

Another thing to point out, though, is that not all the items on the menu are what most people think of as Mexican food. The food here is very much as it would be found in some of the high end Mexican restaurants, as well as many Mexican homes. People in Mexico like a variety of food, and many times like to have American or European style food. The waitress told me on my first visit that the food here was not traditional Mexican food, but I think she meant it is not the kind of food you traditionally expect to find in El Paso restaurants. I think the food here is traditional for people in Mexico who like a variety of food and flavors. 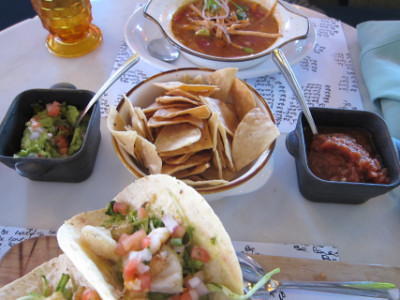 Chips cost extra and are on the appetizer menu. It is not that I have to eat chips with every meal that is “Mexican,” but the waitress made a mistake on my order and rather than taking the chips away, gave them to me for free. They were very good quality and were toasted just right.

I am not sure whether each table gets a complimentary order of Salsa or whether mine came with the order of chips. I do know, though, that the salsa is very good and although it might look like an American style tomato based sauce, it has an excellent flavor and a pretty good kick.

The Guacamole in the photo is an appetizer that costs extra. This is the one item I tried at Mamacitas that I thought could have been better, and it did not have much of a spice level. It was almost like eating straight avocado, which is the way much of the guacamole is prepared, but it is just not the kind that I like the best. 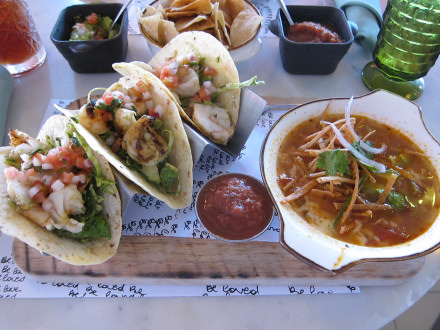 As I previously mentioned, the “lunch menu” has to do with how much you want to eat and not what time of day you come. For my initial visit to Mamacitas I ordered the Shrimp Tacos from this portion of the menu. These were grilled, and either marinated or they had a similar flavoring which was quite good. I do have some experience eating seafood in Mexico, and the tacos reminded me of this. The shrimp was fresh to the extent that it had a very good texture and flavor. I usually avoid ordering shrimp in El Paso but these are ones that would definitely make me want to come back and have them again.

My meal came with a choice of side dishes which were all three dollars extra. In my case I got Tortilla Soup which was one of the better ones I have tried. I think they did everything right in the soup, but what really impressed me was the Mexican cheese which was in little irregularly shaped balls and was really something I do not see much in El Paso (let alone anywhere else in the United States).

The tacos came with their own container of the same salsa that was served with the chips. Traditionally I have found that restaurants serve a cheap salsa with the chips and give you a better one with tacos (or sometimes they give you a cheap one for the tacos). In this case, though, I think the salsa was good with both, and I want to commend them for that.

One amenity here is that Iced Tea is free with the meal. I do not know what other drinks are available for this deal, but the waitress said they charge enough for the meals that they are not worried about giving you tea. (Note: In 2021 the prices of all restaurants has gone up so much that even many of the “regular” restaurants are now charging as much as Mamacitas, but most or all of them charge extra for tea).

Other Notes
I went during the middle of the afternoon, so I do not know how busy it gets at lunch. The restaurant seemed to have limited seating, though (and the tables may now be spaced farther away from each other because of Covid).

The menu seems somewhat limited, although I still see several things I would want to try on additional visits. The dinner menu is pricey but since I have not ordered from it I cannot judge the quantity of food and the value you get for the money. The prices here are modest, though, compared to just about any other city in the United States (and are only expensive by El Paso standards).

The genre of restaurants called “New Mexican” by Yelp has become quite popular in El Paso over the past few years. I think this is the type of food championed by Aaron Sanchez who has El Paso roots, and is a judge on MasterChef and MasterChef Junior. I think Rick Bayless, who is from my “other” home town of Oklahoma City prepares the same type of food in his restaurants in Chicago. I have not eaten at either Chef Bayless’ restaurants or Johnny Sanchez in New Orleans owned by Chef Sanchez, but I am glad this type of food is coming to El Paso (actually it is more correct to say it is expanding, since I think some elements of it have always been here).

Hopefully I can come up with some type of classification to distinguish this type of cuisine from the one that describes the food of New Mexico.