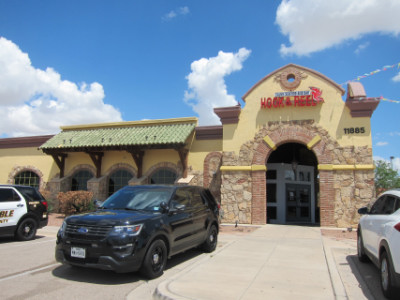 Hook & Reel is a chain that is rapidly approaching the status of being nationwide, although at the moment I think the El Paso restaurant is one of its westernmost outposts. It has certainly made a splash here and in other cities, I think because people are craving the kind of “Cajun inspired” flavors that the restaurant advertises.

When I went to the restaurant I was not expecting authentic Cajun food, and it turned out that even my low expectations were perhaps a little too optimistic. They specialize in seafood, and in fact this is pretty much the only thing on the menu (except for a chicken po’ boy). There are three major ways they are prepared–in baskets, po’ boys, and boils. These are all part of Cajun cuisine, and I think the boil is really their specialty (boils are meant to serve from two to a rather large group of people except for their “mini boils”). They have some Cajun side dishes but the selection is quite small (what I tried was good, though).

I did not try the boil, and this seems to be the most popular item at the restaurant. I am only guessing that it would have been better than the basket I had, but would probably not live up to the boiled seafood I had on the Gulf coast. This is just my way of saying that I probably have not yet tried the best food the restaurant has to offer. 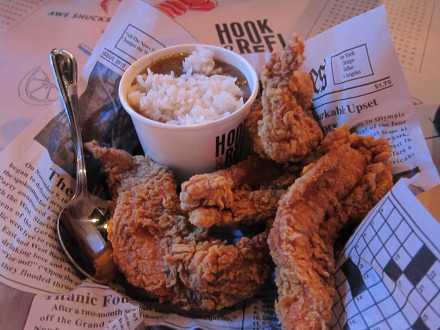 Flounder basket with a side of gumbo

For me the main choices for lunch seemed to be either a basket or a po’ boy. I think both of them are fried, so the best choice seemed to be the basket. Flounder is a type of fish I rarely encounter in El Paso, so I chose this one. It turned out that the Flounder Basket was even more flavorful than I had expected. The flounder compared favorably to the fish I had eaten at Mac’s (the restaurant that I consider to be the best in town for seafood). Moreover I was happy with the quantity of fish that was served, and the price was not too bad.

The problem for me was the oil they used to fry the fish. It tasted good, but later hit me with an aftertaste that I only seem to get at the chain restaurants (The Catch in Oklahoma City had a similar aftertaste but not as strong as the one here). What started out as a good experience turned out to be a major disappointment.

On the other hand I was not expecting much from the Gumbo, one of the choices that can be ordered with the basket. It was quite good, though, and was even spicy at the point that I would expect from Cajun food. This also reminded me of The Catch (a chain in Texas and Oklahoma) where the side dishes were better than the main items.

Another disappointing thing about the basket was the sauces. I tried the barbecue and Cajun sauce but turned to adding lemon as something that had a better taste (I did not try their tartar sauce). Actually when I was in Cajun country I encountered very little fried food, so I am not sure what kind of sauce they would have used there.

Overall Observations
The flounder was very good, and it may be worth a trip here to get this or the other seafood they serve. Mac’s Downtown also has very good fish, though, so Hook & Reel is not the only possibility in town.

My biggest problem with the restaurant is the lack of options besides food that is fried or boiled. They do have a clam chowder which I have not yet tried, but otherwise I do not see a whole lot that I would like to order.

The gumbo was quite good, but I do not see a lot of options for other traditional Cajun dishes.

Another lack of options here is anything other than seafood. The tradeoff, though, is that the seafood is better than at most places in town.

If I order a fried dish I know what I am getting and I know this is not the healthiest thing in the world. I just was not expecting the kind of oil aftertaste that I found here. I recognize that this is my own personal reaction and I believe not everyone is going to have a similar experience.

Probably the parting thought I should give is that the gumbo really was quite good.