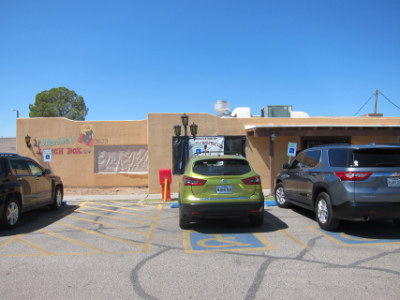 Lunch Box off of Montana Ave.

At my old office one of the most popular lunch spots for my co-workers was The Lunch Box, which for some reason I never tried at the time. It was nearby at Yarbrough and Carolina Dr. (it has now moved to Carolina near Giles Rd.), had good food, and most importantly to most of them it was inexpensive. I think the down side was that it was always mobbed with people, and if my memory is correct that is the main reason I never tried it (and there were always plenty of alternatives that were slightly more expensive but less crowded).

One of the alternatives that I liked quite a bit was Griggs Restaurant on Montana Avenue which at the time was one of the most expensive Mexican restaurants in the city, but I considered its New Mexican cuisine to be alta cocina and worthy of occasional special lunches (such as payday). Griggs had a restaurant on Doniphan Drive in the Upper Valley for a number of years and at some point decided to open a second restaurant on the east side. Mr. Griggs told me that he originally wanted to put the restaurant on Airway Boulevard where Jaxons ended up opening a restaurant, but he found a location on Montana that was also very accessible to the airport.

This turned out to be a good location for the Griggs Restaurant because it was set back from Montana Avenue, and the restaurant had the same feeling of a Mexican hacienda that was one of the main draws for the Doniphan location.  There was access from Buckner Street, but there was also a winding driveway off of Montana that led to the back side of the restaurant, and which still gives access to Lunch Box if you can find it. Now all the area between the restaurant and Montana Avenue has been filled in with development, so Lunch Box no longer has the setting of a hacienda, although the architectural features of the building are still there, including Griggs’ indoor fountain which I do not think is actively used but it is nevertheless something you do not see in every restaurant. 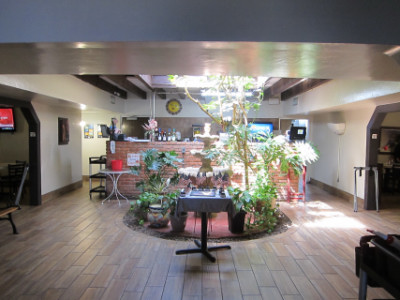 Fountain and indoor patio inherited from the former Griggs Restaurant

Lunch Box still has some of the decorations and antique furniture that used to be at Griggs, but it is much busier than Griggs used to be (where I think the emphasis was on having a leisurely meal).

As far as the quality of the food is concerned,  I think Lunch Box is competitive with just about any place in El Paso, and is a worthy successor to Griggs. 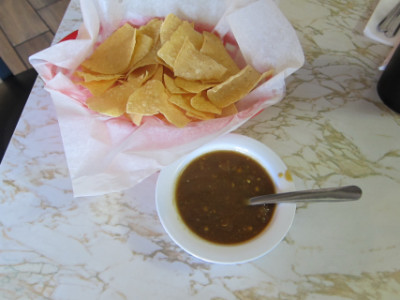 The Chips are up to the El Paso standard. The Salsa, though, is far better than most, and may be the best in El Paso. It is quite spicy (and seeds are visible, usually meaning that it is on the spicy side). It is made with pureed green chile, and may be notable for what it does not have as much as what it has. There is no filler or anything to detract from the flavor of the chile and spices that make up the body of the sauce. I was happy that it almost had a New Mexico flavor rather than many in El Paso that get there heat from chipotle or other chiles that also give you a strong flavor that may come off as smoky or have other flavors besides the one you get from green chile. 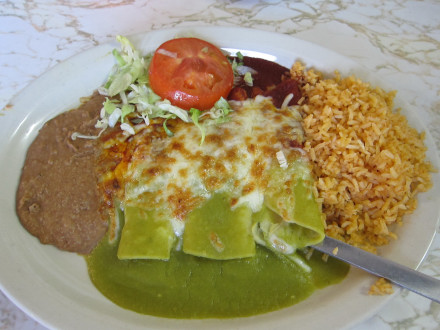 The Cheese Enchiladas were excellent as well, but with some explanation that I need to provide. I tried to order tri-color enchiladas (red, green, and sour cream) but the waitress did not explain that they did not have this. Instead she brought three enchiladas with red on one side and green on the other. When I asked about the sour cream she brought it in a bowl, but there was an extra charge for it (while with restaurants that have a tri-color plate the sour cream is included in the price).

One thing that was unexpected about this plate was that the green sauce was really the best out of the two sauces. Usually the El Paso restaurants make the green sauce using jalapenos and other Mexican chiles, while here the green sauce was close to the taste of New Mexico green enchiladas (although I do not know what kind of chiles they use here). All I can say is that they do a very good job with the green chile.

The red sauce had a smoky flavor that I think comes from cumin and/or using crude red chiles that are not totally pureed. I am told that all El Paso and Ciudad Juarez red chile has cumin, but the good cooks only use a little bit so that the flavor is not so pronounced. That was the case here, and I thought the red chile was very good, but just not as good as the green.

The surprising thing, though, was that both sauces tasted better with the sour cream. I rarely even think of ordering sour cream, and here it was just a fluke because I originally had a desire for tri-color enchiladas in which one of them would be sour cream. Here, though, both red and green are good–but even better with sour cream.

Other Notes
I was impressed enough with the enchiladas that I would very much like to try some other items. They are also open for breakfast and have popular items available then as well.

If you are coming from the west there is a tricky thing on Montana Avenue where you have to veer into what looks like a left turn lane, but actually it is a through lane that allows you to turn left onto Buckner. My advice for visitors from other cities would be to go to Montana from McRae or other points to the east, and turn onto Buckner making the right turn. This shows that Lunch Box is truly a local hangout when you almost have to be a local to even figure out how to get there.

Lunch Box is one of the places mentioned on local web sites for a good Lent meal (Comida de Cuaresma). Obviously I hope I can try it.

I also need to note that the price you see on the menu is the cash price, and there is an extra charge if you pay by credit card. Prices are cheap enough, though, that most people should be able to afford paying by cash.

The green chile seemed slightly spicier than the red, and both were in my “four chile” category where it is spicy enough to give a kick but not so spicy that your taste buds get singed.