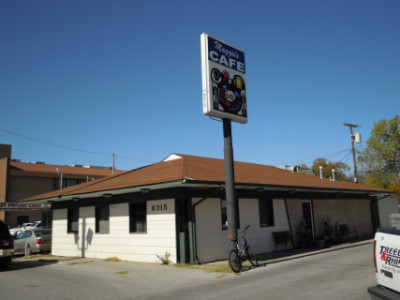 Note: Maggie’s Cafe was my introduction to Polish food, and the more I ate there the more I wanted to try other things (but it closed shortly after I started going).  There were many positive reviews of it on the Internet, not from people who had a Polish background, but from people who just liked good food.  This “old” review of a closed restaurant may at least provide an introduction to the cuisine of Poland.

From the outside Maggie’s Cafe looks much like many other diners and small restaurants in the heartland, but even the large sign in front does not divulge what seems to be its best kept secret–that this is probably the only place in the OKC metro that serves Polish food. At least this was a secret to me until I first heard rumors about it and then found information on the Internet leading me to Maggie’s Cafe.

Maggie’s has the standard American menu found in many other restaurants, but I would say this type of home cooked style food is more common in Oklahoma’s small towns than in Oklahoma City. On my first visit it seemed as if they were doing a booming business in pork chops, but the breakfast, lunch, and dinner menus all had their own most popular dishes (breakfast is only served until 11:30 a.m.).

When I first visited Maggie’s in the summer of 2010 the restaurant was open for dinner on Fridays and Saturdays, with a special Polish menu served on both days (the largest selection of items was on Friday night). Maggie’s is no longer open for dinner, but all of the Polish specialities are available at lunch (and I believe some are on the breakfast menu). 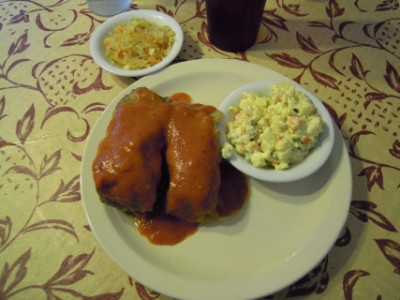 One thing I discovered about Polish food is that most of the items served look similar to German food, but they are prepared differently. For instance, the Golabki seemed similar to other cabbage rolls I have tried, with mushrooms and beef encased in cabbage leaves. It was not as highly seasoned, though, as many other cabbage rolls, and the tomato sauce on top gave more of a slight flavor to the rolls than a strong, overpowering one. These rolls were quite flavorful, but all the flavors were more subtle than I had expected. After several visits to Maggie’s Cafe, the cabbage rolls continue to be one of my favorite items.

The Sauerkraut was excellent, and was possibly the best I have tried in the OKC area (although I will have to reevaluate that after trying the one at Ingrid’s Pantry, which is also located in Bethany).

Polska Salatka, a Polish style potato salad, was a little different from most, with peas and carrots mixed in. It had a mustard base, and the potatoes were cut into such small pieces that they were not as predominant as is the case with many potato salads.

Mashed Potatoes that came with the dinner were kind of plain as far as flavor, but they were much like ones that would be served at home where each person can add their own salt or seasonings. Most lunch plates come with a side dish (as opposed to two sides that were served with the dinners), and I would say the mashed potatoes would probably not be my choice when only a single side dish was served. 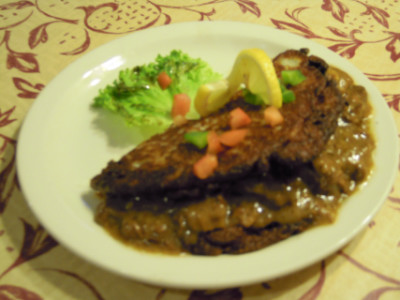 The Placki Cyganskie, or potato pancake with goulash, was the dish Maggie’s advertised as their specialty. While I thought the cabbage roll had a subtle flavor, the potato pancake to me was almost to the point of being bland. This does not mean, though, that I did not enjoy it. On the contrary, I thought this provided a good contrast to the goulash that was stuffed inside like a sandwich, with the pancake serving as a bread (and yes, it was cooked like a pancake that looked as if it came from a grill).

I do not think the Goulash is served separately, but if it were it would be one of my favorite dishes at Maggie’s. The gravy had a very good flavor and the chunks of meat were moist and flavorful. 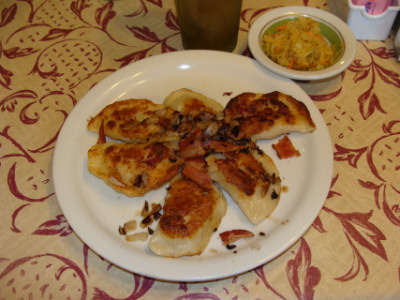 Pierogi is the dish I have seen mentioned most often by other customers, and I definitely thought it was one of the best dishes served at Maggie’s. This was a fried dumpling with potato and cheese inside, with bacon on top. This description probably does not do it justice, though, because the flavor was quite strong and quite good. I would say the flavor came more from good cheese, fresh potatoes, and flavorful dumplings than from seasonings or other added ingredients. Of course the bacon also played a big part. 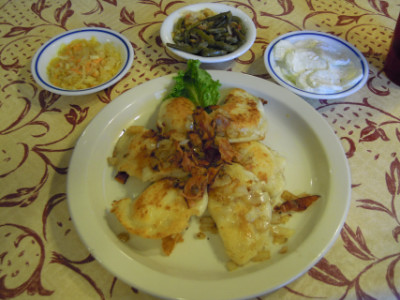 Mizeria, a Polish style cucumber salad, sounded more interesting than it turned out to be when I ordered it. I should state, though, that I generally do not care much for creamy dressings or sauces that are similar to the one used in this salad.

American vegetables are also served, of which I have found the Green Beans to be the best I have tried so far. These are cooked with bacon, but they bring bacon flavored green beans to a whole new level than I usually find in American food restaurants.

The American menu at Maggie’s is probably as extensive as at any other American restaurant in town, but based on what I have tried I would probably say it is better than most. The restaurant is small, but well decorated and comfortable. Polish main dishes or side dishes can be ordered along with the American food if customers just want to sample them.

The slices of cake served look more like about a sixth of a cake than the standard sized slice, and they look very good (but I have not tried them). There is really a lot at Maggie’s that I would still like to try.