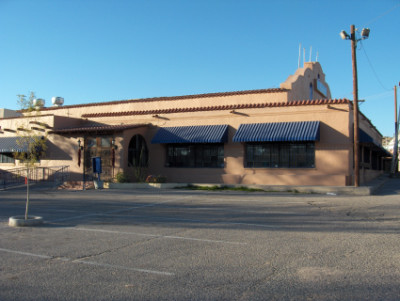 La Hacienda was one of the most well known and popular restaurants in El Paso until it closed in 1996, and was known for literally being on the border, with the banks of the Rio Grande located just past the edge of the parking lot.

An article from the UTEP Encyclopedia outlines the history of La Hacienda, and how it was located in one of the oldest homes in El Paso.  In 1940 it was turned into La Hacienda Restaurant, and was operated by the original owner until he passed away in 1981.  The restaurant continued with the same food and the same employees until 1993 (1993-1996 was the first of several subsequent periods in which the food was changed).

The restaurant reopened after 1996, and had several reincarnations with different owners.  I visited La Hacienda in 2004, but the food bore little resemblance to what I had remembered.  I heard that the restaurant closed for good in 2007. 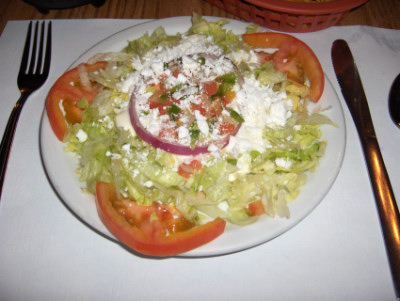 I never wrote a formal review of the original La Hacienda restaurant, but it was known for its lunch specials.  I believe there were daily specials (as there are at Amigos today) as well as combination and specialty plates that were always served.  Freshly baked bread and a small but tasty soup and salad were served as appetizers.  The portions of food were not huge but they were just right for lunch.  The waiters had worked at the restaurant for their entire careers, and they knew the customers as well as knowing how to give the “old style” service that was the traditional Mexican style.  I usually tried to go about 11:00 am because the restaurant filled up fast.  The last tables at the end of the dining room had a view of Paisano Drive instead of the more tranquil view of the “Peace Grove” in front of the restaurant, but the service was good anywhere you sat. 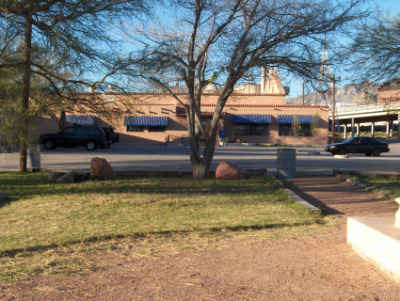 View of La Hacienda from the Peace Grove in 2006

I did not know until I talked to the people at Amigos that the recipes for the red enchiladas came from New Mexico, and this is why they were spicier than most others in El Paso.  Many dishes served on the daily specials seemed to come directly from Mexico, while other items such as the chile relleno, taco, rice, beans, and salsa were what I would call the iconic El Paso style. 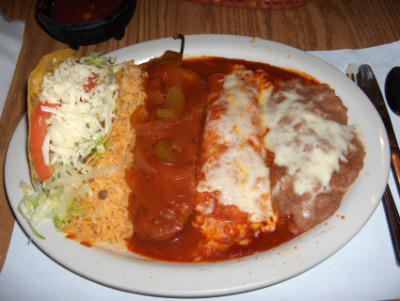 I ate at the “old” Hacienda dozens of times before it changed management and the whole staff left to start Amigos Restaurant. The restaurant closed and then reopened in its current incarnation. I had heard many bad reviews that frankly scared me away, but I finally decided it give it a try.

My assessment is that it is neither as good as the people who like it a lot say, nor is it nearly as bad as the bad reviews would lead you to believe. In fact, the Chile Relleno is actually quite good. I say “chile” (singular) because one will just about fill you up. Although I don’t like the El Paso style of pouring ranchero sauce on top of it, this one actually has very good sauce (and cheese). Moreover, the egg batter was so good that it dominated the sauce, causing a really good balance of flavors. It was refreshing to have food that was hot enough to use the chips to cool it down a bit.

The Enchiladas were dark red, and although not the best in El Paso, were satisfying.

Probably the best part of going here is being in the historic building; it is almost like being in Santa Fe (actually you are a couple of hundred feet from Mexico).

The waitress I had was reviving something that is almost dead in El Paso–providing good service.

Normally I don’t care much for mariachi music but the band here is actually very good (and enjoyable).

Although I didn’t try the more expensive items on the menu, I suspect they are a lot better than the standard fare of tacos, enchiladas, etc.

Amigos started with almost the entire staff from the original La Hacienda, but on my last visit there were only two that were still there (and one of them only worked at lunch).  The food carries on the La Hacienda tradition, though, particularly on the lunch specials.  Amigos has added several authentic Mexican dishes, but some are served only occasionally as specials.

I think if you want to try the old food from La Hacienda it is best to ask the staff at Amigos what to order.  I don’t know if the rolls are still the same at lunch since the original source (La Ideal Bakery) is now closed, but I am sure they are staying as close to tradition as is practical and as customers still want to order.