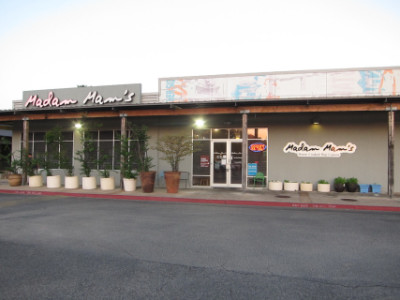 Madam Mam’s is more than just a highly rated Thai restaurant in Austin–it played a large role in my education about Thai food. During the 1990’s and early 2000’s I was discovering that Thai food was one of my favorite cuisines, but Thai restaurants were somewhat scare in the Southwestern United States. El Paso had very limited options, while my trips to see family in Oklahoma City and Lubbock provided some additional opportunities to try the cuisine (with Lubbock surprisingly being the better of these two options).

At the time I was making regular business trips to Austin, where the Thai restaurant scene was far better developed than any of the other cities in which I spent significant amounts of time. The problem with going to Austin was that I was almost always with colleagues, and we needed to come to a consensus about where to eat (which almost always led to a safe and mainstream choice). One colleague, though, was from California and had a much better knowledge of food than many of my other co-workers. I learned quickly to trust whatever he said (on the trips that the two of us made), and it was he who wanted to try Madam Mam’s on (then on Guadalupe St.) near the UT campus. He told me the problem with the El Paso Thai restaurants was that they were lacking good curry, and he thought the one in Austin would be worth a try (both of us were very pleased with it).

This is really the only explanation I probably need to give about Madam Mam’s, except for the question about why it took me so long to come back for another visit. The only good thing I can point to is that in the meantime I had several dozen very good Thai meals in the Seattle area, in addition to ones in the other places I lived or visited (still, Madam Mam’s was a special treat when I was able to go back). 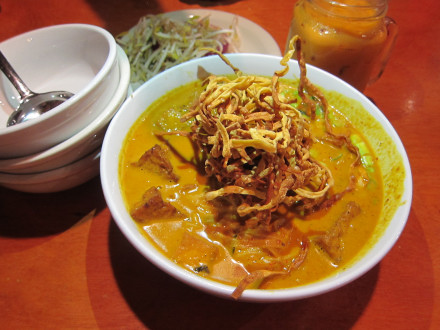 Kao Soi is listed as a “northern Thai” dish on Madam Mam’s menu, which is a main reason I picked it out of the dozens of menu items that looked good. I had first tried this dish in Oklahoma City, and found it to be my favorite curry in the city. Curiously, though, Madam Mam’s does not list it as a curry, but rather as “noodle soup.” Flavor-wise, though, I think it is definitely a curry (both at Madam Mam’s and at the OKC restaurants).

All of Madam Mam’s items have an “indicated spicy level” listed on the menu (with the maximum being four stars which include items such as the jungle curry). Outside of Seattle I had only found one other restaurant which prepared dishes with the chef’s recommended spiciness, such as at Madam Mam’s (and the other restaurant, which is in Oklahoma City, eventually gave up on this system and now asks customers to tell them how spicy they want it). Madam Mam’s allows customers to change the spicy level from the default, but the reason I would recommend the default is that the chefs give you the heat level that best brings out the flavor of the dish (this may sound a little far fetched, but it has been true every time I have been able to try it). The kao soi had a a two out of four star rating–not enough to test whether the higher levels would be challenging for me, but enough to know that having food that is Americanized or at a too low spice level is not a problem here.

Kao soi is a red curry soup that the menu describes as coming with egg noodle, pickled mustard green, fried shallot, and Thai roasted chili. It is topped with crispy egg noodles. I ordered mine with tofu (the only aspect of the dish that ended up being a disappointment–I think soft tofu would have worked better than the fried tofu I got, and maybe chicken would be even better). These were quite a lot of ingredients compared to the kao soi I had in Oklahoma City–the OKC version was also sweeter while this one had more of a ginger flavor. Both versions of kao soi were very good and I do not really have a favorite out of the two, but I would say that Madam Mam’s “has” to be more authentic (because otherwise, why would they put so many ingredients in it?).

Drinks
I had an excellent Thai Tea with the meal, with the kind of quality I expected from this restaurant. The menu lists quite a few special hot teas and iced drinks.

An Assessment
If I look at this as an upscale Thai restaurant (which I do), the prices are surprisingly reasonable. I will have to say, though, that the location on 26th Street is far more casual, has a large outdoor patio, and gives more of an experience of eating Thai street food (yet I believe all the branches have the same menu).

My big question about Madam Mam’s is whether the other dishes are as good as the curries. I suspect, though, that they are every bit as good.

I am putting Madam Mam’s in the $$$ price category, but it would be the low end of the category. Also, their “street food” menu is definitely in the $$ category (with items such as rice soup, vegetable stir-fry, and the “Bankrupt Noodle” (street style pad thai). Probably a bigger way to save money, though, would be to get a soft drink or some of the other alternatives to the Thai tea.

I was splurging a little bit, but I think the only way to really spend a lot of money here would be to get wine, some of the desserts or appetizers, and/or the most expensive items on the menu (which I think are the “Special Curries”).  I also think some of these items might really be worth it.

Cuisine: Thai
Cost: $$$
Hours: Open Daily
Accessible: Yes
Smoking: No smoking
Alcohol: Beer and Wine
Additional Locations: There are four locations in Austin including the original which is now on W. 26th St. near the UT campus