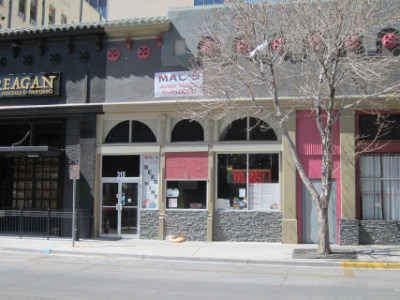 There are certain things that do not seem to compute. Traditionally for me this has included good Mexican food in Oklahoma and barbecue, chicken fried steak or hamburgers in El Paso that I could take seriously. Of course there are always exceptions but it takes a lot of persistence and luck to find them.

One thing that has traditionally not worked to my satisfaction is seafood in the desert. There is some fresh fish available from the area’s rivers and lakes, but just about the only seafood that I have generally found worthwhile has been in close proximity to a coastline.

In recent years, however, things have been changing in El Paso and Mac’s is one of the places that is making this happen. I will not say that all the food at Mac’s is like eating on the coastline, but the blackened cod and the clam chowder come very close for me. I hope and expect that I will find other excellent dishes here, although for now I can at least say I have found a couple of items that are very satisfactory. 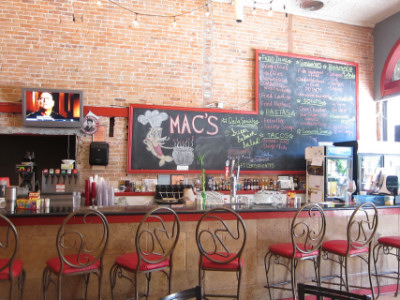 The bar at Mac’s

With that said, seafood is not the only thing on the menu. The salad is another item with a quality I do not typically find in the desert, West Texas, the border region, or other stereotypes I could give about El Paso. This is another hopeful sign for Mac’s even though I have not tried enough of the menu items to have really made an overall assessment of the food.

Another very good feature about Mac’s is the fact that my best experience came from going with an open mind and asking the waitress what was best. This is a tactic that does not always work, but at Mac’s I think you will have good results.

Mac’s is located in downtown El Paso in the building that was the long time home of La Terraza Restaurant. Mac’s is the reincarnation of the former Seafarer Restaurant on Lee Trevino, so the owner’s experience at preparing great seafood is much longer than the brief time that Mac’s Downtown has been open. There is sometimes live music here and it is definitely a laid-back atmosphere. The owner says, however, that this is not a sports bar and I found from experience that it is closed on Super Bowl Sunday (although the pandemic and generally slow business lately probably had something to do with it). I would sum things up by saying the restaurant is suitable for families and those who like to have conversations undisturbed by loud noise or loud music. At the same time, though, service is quick enough for downtown workers on their lunch breaks. 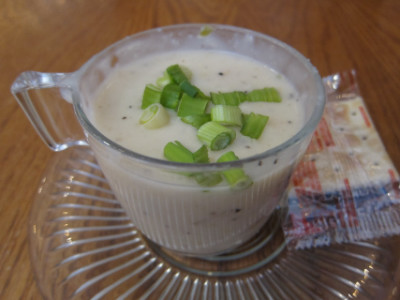 I once spent a week in the Boston area and was practically living off of the Clam Chowder there. I have since spent considerable effort looking for suitable substitutes in other parts of the country, and I think I may have found one at Mac’s. I do not taste the clam as much as the broth, so when I say the clam chowder here is one of the best I have ever eaten it is mainly because of the broth (and I am comparing it to the chowder in New England). Everything tasted quite fresh, and the large amount of pepper in it made me think it is actually more New Orleans style than New England, but personally I really liked the way it was done here. The only disappointment was that I wish they had oyster crackers to go with it instead of Saltines. 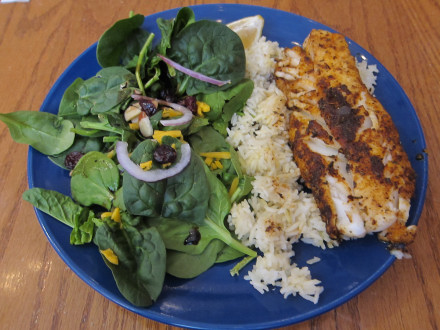 Cajun dishes seem to be the specialty here, and they include dinners (such as the Blackened Cod shown in the photo), sandwiches (including po boy), ettouffée, soup (gumbo), and apparently many of the daily specials (such as shrimp boil). I thought the blackened cod had a top notch blackening flavor, and the fish had a freshness that I seldom experience in El Paso. What was even better was that the blackening was spicy enough that I think this provided an added dimension to the flavor.

The Salad was quite notable, and it is included in the price you pay for the dinners. I already know that Mac seems to have a secret source for fresh fish, but there is apparently one for fresh greens as well. The dressing was just right as well (not too tangy or too weak) 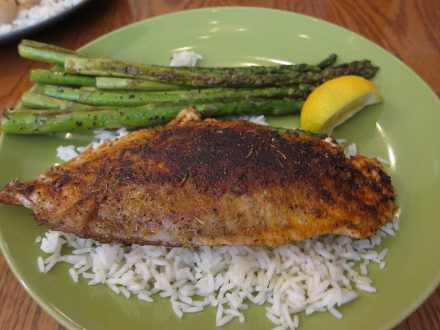 The Blackened Salmon was not as impressive to me as the cod was. The truth is that I have never really found any salmon in El Paso that gives me as much satisfaction as I had in Seattle. I also think that if you have really good salmon, why blacken it, while if you are going to use blackening the salmon is not really the best fish to use with it. This is just me, though, and is not meant to discourage anyone from trying it. 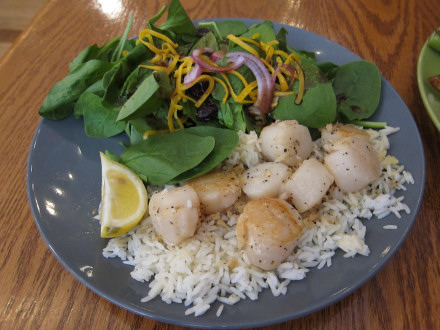 I am putting the Scallops under the category of “Specials” because it is not on the regular menu. Mac’s seems to have specials every day but I do not know if they repeat each week or whether they are more or less random. I just had a taste of the scallops so I will not try to give a review of them.

Additional Comments
Right now the only real recommendations I can make are to get the blackened cod, clam chowder for an appetizer, or the ask the wait staff for their recommendations. I am confident that any of these would be a good step toward having a very enjoyable meal.

I am also confident that there are many other good meals to have here besides the ones I have tried. Not everything on the menu is seafood, but this is one of the better places in town to get seafood. I almost think of this as a Cajun restaurant as much as one that serves seafood, but really it is both. I am just happy that the Cajun food I have tried seems to be done the right way.

Although the prices here are reasonable, Mac’s has a surcharge if you use a credit card (so my tip is to bring cash).