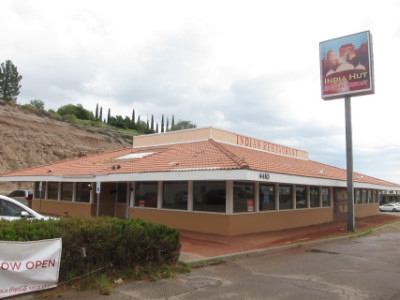 Update Mar. 2021: I got a delivery order and have not visited the restaurant in person this year. Some reviewers on Yelp seem to indicate that there is still a buffet, but almost all of the comments are for items they ordered from the menu (not something that was common in 2019 when most people had the buffet). My comments about the buffet in this article are from 2019, but I do not know to what extent they still apply.

I know that many Indian people believe in reincarnation, and if this principle applies to buildings there is probably no better example in El Paso than the one that now houses India Hut. A number of restaurants have operated in this building over the years, and one that I particularly remember was Asia Garden which was here in the late 1990’s and early 2000’s serving a foretaste of what has turned into a trend of authentic and very good Chinese food in El Paso.

An Indian buffet is actually a very good use of the building which for some unknown reason is long and narrow, allowing the placement of tables on one side of the main dining room and the buffet line on the other. What is not so efficient is the fact that the parking lot surrounds the building, yet only those who find spots on the north side are situated near the restaurant’s one and only entrance (although there is an emergency exit at the south end).

India Hut is in good company with other restaurants which have repurposed a former restaurant with another one which is just as good or even better than before. I put up with quirks in the architecture or layout of the building in order to get good food, and those who are familiar with my reviews are probably aware that this many times involves humble surroundings rather than the city’s fanciest new buildings (although good food is non-discriminatory and may be found in all types of restaurants).

One other part of the story is that Indian food has always seemed to be very popular in El Paso, yet there have traditionally been very few choices for it in the city. In my opinion it has been better quality and less Americanized than many of the ethnic cuisines served, and business has seemed to be good at the Indian restaurants that have been here over the years. For some reason, though, most of them do not seem to last for a long time. India Hut is one that seems to be doing things right–it delivers good quality for the money. Of course this is no guarantee that the restaurant will have staying power but things look hopeful. 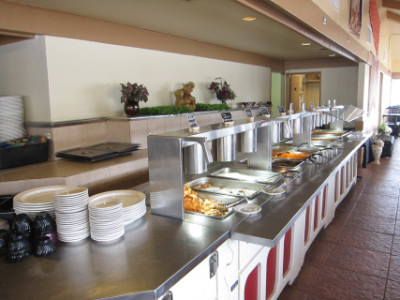 The buffet at India Hut

At times the buffet is the only type of food available, including Sunday lunch (at other times it is also possible to order from the menu). I am not usually a fan of Indian buffets because the food is usually nowhere near the spice levels that should be found in Indian food. In the case of India Hut there usually seem to be one or two items that are more spicy than the others, and they are about as spicy as I would order them from the menu. This alone makes the buffet at Indian Hut better than most I have tried.

With limited visits to India Hut, I cannot make blanket statements about the consistency of the food. What I can say is that on all my buffet experiences I have liked several of the items. They have not been consistent, though, concerning which items these were. On the first visit one of the servers told me he had cooked the navratan korma, and this was one of the items I liked the best. On the second visit I did not like this item as much, and I did not see that particular server at the restaurant (so I assume the korma was cooked by someone else).

More than half of the clientele I saw in the restaurant appeared to be of Indian ethnicity, and it is always a good sign when a restaurant is popular with the people it is supposed to represent. I did think it had a good flavor, although most of the items were not as spicy as I think many Indian people prefer.

One area which was disappointing was their chutney and pickle selection. This has been a deficit in many of El Paso’s Indian restaurants, and is something I use as a test of Indian restaurants. Until recently I thought India Palace did not have them, but I discovered that it is available at an extra cost. At India Hut there are a couple of chutney/pickle varieties available on the buffet, but the ones I tried were so sweet and non-potent in the spicy category that I do not consider them to be true chutneys (they may be authentic, but just not the kind I need to spice up Indian food).

The Naan is one of the most important elements of an Indian meal, and the one here was excellent. They mostly serve garlic naan and at times I have had to wait for the plain one, but they serve it eventually.

Chai is available here, and they have a fruit flavored iced tea that I like. They give one free refill on the chai, and I am not sure about the sweet tea.

The price and quality of the buffet are good enough that I probably would question the desirability of ordering from the menu instead, although if you go for Sunday lunch (and I think any day at lunch time) the buffet is the only option (Note: this information is from 2019, and I am not sure of the buffet’s status in 2021). 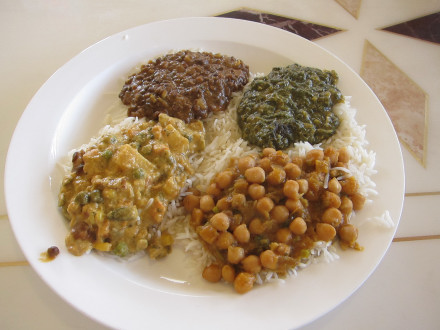 In my two trips for the buffet there has been very little variation in the items served. The above photo shows some of the items I tried on a Sunday buffet. At another buffet they added tadka dal and they had black lentils instead of the dal makhni, but other items were the same including the korma, chana masala, rice, naan, etc.

One of the biggest things I noticed, though, is that some of the items had different flavors and different spice levels on my different dining experiences. There was not really a difference in overall quality, but just that different items were ones I liked best on different trips. For instance, on my first visit the Chana Masala and Navratan Korma were my favorite items. On the second visit the Tadka Dal was the best item, while others that I liked before were somewhat of a disappointment (such as the chana masala).

Thus I really should not write a description of individual items because they seem to change from one visit to another. With a buffet you can sample different items and than get more of the ones you like, so I think this system works pretty well. Overall I liked the food but I was disappointed that only one or two of them were spicy enough for my taste (my sample was mostly of the vegetarian items). I do like the selection of vegetarian items that they offer (the number of choices is about equal to the meat items). 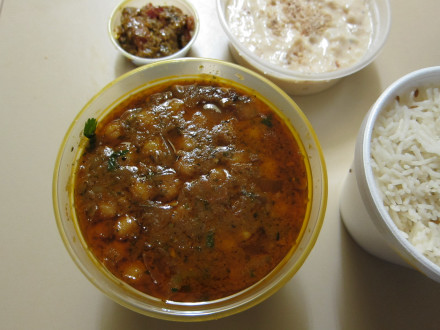 For me delivery has been better than eating the buffet for one reason, which is that you can order a Pickle that is actually spicy (as opposed to the ones I found in the buffet). I should note that pickle is a rather generic term for a relish they make that can have different flavors (such as lemon, etc.). The disadvantage of delivery, though, is that the chai drink is not available.

As far as the food is concerned, though, the Chana Masala was as good as the time I had it in the buffet when I thought it was one of the best items (thus it has been very good two out of the three times I have it). In fact, it was pretty good without the pickle. 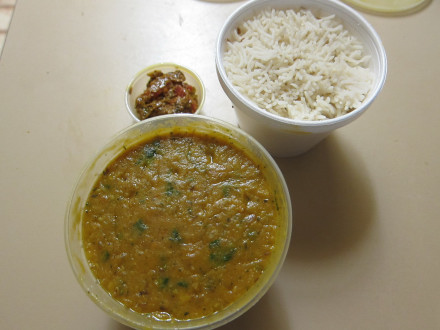 Another delivery item, the Yellow Dal Tadka, is one that I thought definitely needed the pickle, but more for the taste than the spiciness. By itself the dal tadka seemed to have a more bland taste than the one in the buffet, but with the pickle I thought it was better.

Although the delivery items were somewhat better than in the buffet, the price was quite a bit higher for the items I wanted (the main item, naan, dessert, drink, etc.). Since chai was not available I had to provide my own (I get this at Whole Foods).

Drinks
On one of my visits they did not have chai (the owner was not there and no one else could make it). Instead I had a fruit flavored iced tea that was very good and turned out to be much better than it sounded when they described it as “sweet tea.” When I had the chai on another visit I thought the flavor was not as good as the one at India Palace, but they give one free refill and I think this is a good drink to have with the meal.

Other Comments
The positive about the buffet here is that almost everything has a really good flavor, and at least one or two of the items on each visit have been spicy enough for me. They do not have a problem with leaving the food sitting until it gets cold, and the price is good. For now I will probably usually want to eat from the buffet.

India Hut has the standard North Indian items that are most familiar to Americans, and the food is pretty solid. I recently experienced some much more innovative Indian food in Oklahoma City that is not available in the El Paso restaurants (Gil Garduño calls this type of food avant-garde, which I think is probably a better term for it). El Paso also had this type of food at the now closed Chut-ney Restaurant, but both India Hut and India Palace have been very good in satisfying my craving for Indian food. India Hut did have a touch of the more innovative food when one of the servers cooked his own recipe for the navratan korma, but I think for the most part they do not deviate from their recipes or serve items that are not on the menu (the day they had a substitute navratan korma they were short handed and the manager was not there leading to the employees having to improvise).

Perhaps the biggest question for me in the future will be whether the pickle will be spicy enough, or whether it will be available at all.