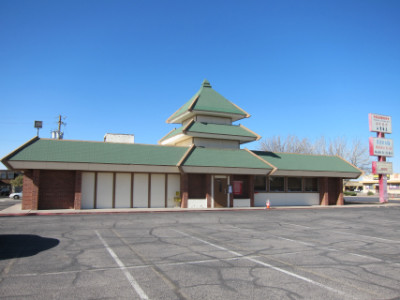 The story of Shan Dong is the same as at several other Chinese restaurants in El Paso. It was started by an experienced Chinese chef who brought some flavorful, innovative recipes to this city that was largely deprived of good quality Asian cuisine. Stories of Shan Dong appeared in the food feature section of the newspaper, and people flocked to the restaurant in a desperate attempt to find an alternative to the many mediocre buffet restaurants in the city. At some point, though, I no longer saw the original owner and found out that the people who had been assisting were now the owners and the assistant cooks were now the head cooks.

Unlike other Chinese restaurants that have gone through similar transformations, however, I think the food at Shan Dong continued to be about as good as it was when the founding chef was here. I think some things disappeared from the menu, but the food continued to be just about as good as ever. There is no buffet (thankfully), and all food is cooked fresh when ordered.

The main drawback I could see from Shan Dong losing its original chef was that there were no specials offered, and the menu did not expand from what was on it originally. The cooks learned how to replicate the original food, but apparently were not able to be innovative with new dishes. Maybe they knew customers expected the food to be the same every time they visited, and this was not necessarily a bad thing.

One thing I found out later, though, is that the new owners started adding Korean food to the lineup, and that this is now the “new and innovative” food. Some of these are menu items and I think some are dishes that can be specially ordered.

Because of this I am splitting the review into two parts. The “Chinese” section reviews the food from the original menu, which has been continued by the new owners. The last time I tried the Chinese food was in 2007 and 2008, and the photos are from these visits. I believe the food is still the same and that my comments about the Chinese food would still apply to what is being served. I talked to the staff on my latest visit in 2021 and everything seemed the same except that they were still dealing with Covid and the fact that their customer base had dropped off precipitously (because of the virus and not because of the food).

The “Korean” section is more recent but I have only tried one of their Korean dishes so far. 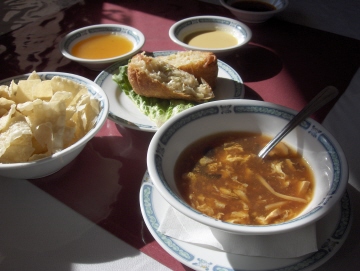 Hot and Sour Soup is very good, and the Egg Roll is even better.

The menu at Shan Dong used to be a little different than most Chinese restaurants. Most items came with full or half orders, and both were available all day . There was no lunch menu, but if you went during lunch hours (11:30 a.m. to 3:30 p.m.) you received a complimentary soup and egg roll. I am writing this in the past tense because I believe it changed due to the pandemic of 2020-2021. Now the on-line menu says that they have lunch and dinner portions of all of the main dinner items, but it does not say whether this is restricted by the time of day you order. The on-line menu does not show some items such as home style tofu but I believe these are still available. The menu says if you want soup or an egg roll you have to pay extra for them, but I do not know the actual situation right now for dine-in customers. In the past, though, they tried their best to give customers a good deal.

One of the best features I found here was the presentation; food items had a deep rich color and were served with an orange and garnishes. The hot and sour soup had a deep brown color and the egg drop was deep yellow. They used to give a colorful array of condiments that included plum sauce, hot mustard, and chile oil (during the pandemic the condiments largely disappeared from restaurants and i do not know if Shan Dong still has them).

The Egg Roll here is the best in El Paso (I do not need to qualify this as being my opinion, since just about everyone who has gone to the restaurant with me agrees). It comes with chicken inside, and is a delicious roll of substantial quantity. The hot mustard served with it is outstanding, and the fact that it varies in thickness indicates that it is made fresh daily.

The Hot and Sour Soup has received compliments from just about everyone who has accompanied me to the restaurant, and I like it as well (but I still prefer the versions served at some of the more authentic Hunan and Sichuan style restaurants in other cities). 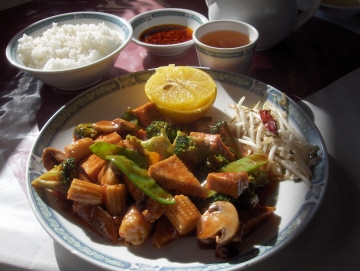 A “go to” item for me has been the Home Style Tofu, and most of the time it has been excellent. The sauce is a red color and is thick instead of runny as at most restaurants. Although the quality is variable, it varies between excellent and good. Shan Dong usually makes this dish spicy, but will also serve chile oil on the side. The lunch special came with shrimp, but it could also be ordered vegetarian if preferred. (Note: in 2022 I am not sure if they still have lunch specials).

The general consensus of opinion is that the chicken items are best: General Tsou’s Chicken, Double Cooked Chicken, Crispy Chicken, Lemon Chicken, etc. I generally consider most of these to be Americanized gooey and syrupy dishes, but they taste better here than at most restaurants. The spicy ones (such as General Tsou’s chicken) are specialties of northern China, the type of food I think Shan Dong does best. (Note: General Tsou’s chicken is not a real Chinese dish but I am talking about the sauces and flavors served by Shan Dong in saying this is representative of northern China). 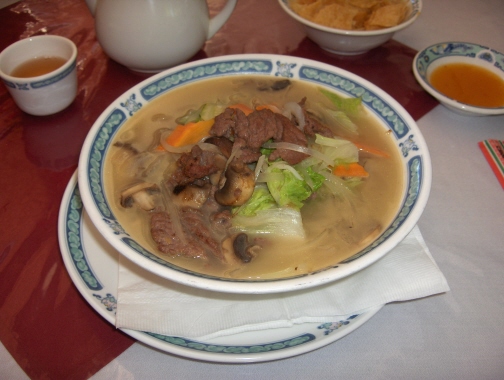 Noodle soup with beef is a northern Chinese style dish

Noodle Soup is a dish I consider to be more representative of traditional northern style Chinese food than many of the things on the menu, and it is also one of my favorites at Shan Dong. This soup had a milky colored broth that was different from others I have seen, and was very good. Noodles were the thin type that did not fill me up on starch, so that the meat and vegetables were more predominant than in some other versions. Chinese green vegetables were included, and overall I was very impressed with the soup. The soup comes with either beef or shrimp, but since each one is individually cooked it can probably be made to order if customers would like something different. 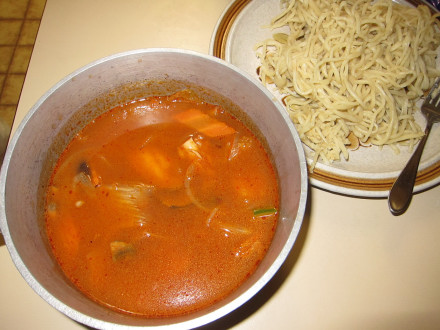 When I visited in 2021 I asked for one of their Korean dishes, and one they recommended was the Seafood Noodle Soup. This was much spicier than the beef noodle soup I had ordered earlier, and had a red broth that was reminiscent of some kimchi dishes I have had in the Korean restaurants along Dyer Street. Unlike some of those restaurants, though, it was not spicy to the point that I regretted ordering it. The soup had especially good shrimp that were flavorful, peeled, and cleaned very well. Some of the other varieties of seafood included in the soup were not the best nor the worst I have had in El Paso–just the garden variety you get almost anywhere. Because of the broth, though, I now have the intention to mostly order Korean food in the future even if elements of it are  not five-star dining.

Tea
The jasmine tea in the 1990-2000’s era was brewed in the kitchen and was outstanding– it would hold its own with most of the house teas served in Chinese restaurants on the west coast; the only difference is that at Shan Dong it cost extra. (Note: I do not know if it is still the same after the pandemic but I assume so).

An Assessment
I am not yet calling this a Korean restaurant. The Korean items on the menu are not identified as such, and I think some of the items they can prepare are not on the menu (much like some of the restaurants on the west coast who have a “secret menu” for their customers who want the “real food”).

Chinese food here is the restaurant’s “legacy food,” created by the original chef and still served because they are so good. At this time, though, the only thing in which I would have much interest would be the egg roll and the home style tofu (they really are that good).

It used to be that service was slow at lunch because they had a rush of people who wanted the egg rolls, hot and sour soup, chicken dishes, etc. I do not think they have the same number of customers now, nor do most restaurants in the city. Many of the newer restaurants have very small spaces and they get full with a relatively small number of customers (but the restaurant has cut down on its overhead this way). Shan Dong has a huge dining room that I do not imagine ever gets full these days, but it is probably good if they need to go back to having social distancing.

The reason I think Shan Dong still has the same menu as before is that I saw it when I went in for a takeout order–I did not study it closely but it looked much bigger than the streamlined menu that I see on line. I encourage old customers to come back and try Shan Dong again, but if you want to expand your horizons then definitely try the Korean food.

Cuisine: Chinese
Cost: $$
Hours: Closed Tue (I am getting conflicting info. about its closing time in the evening)
Accessible: Yes
Smoking: No smoking
Alcohol: No