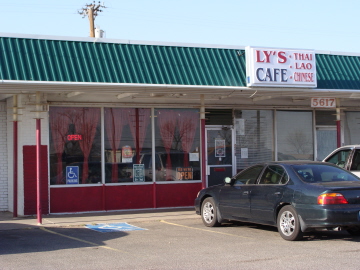 Northeast Amarillo has a concentration of restaurants within about a three block area that serve Lao food, and I have only heard of a handful of cities in North America with a similar concentration of this type of cuisine. My first experience trying food from Laos was at Houang’s Restaurant, which was in the building now occupied by Ly’s Cafe, so this made me very curious to see if the food at Ly’s was as good as I remembered. I have now had the chance to try several of Amarillo’s Lao restaurants (some of which are now closed), and I can say that Ly’s ranks among the best.

Ly’s Cafe is located behind Thai House in the 5600 block of E. Amarillo Blvd. The area has been spruced up quite a bit since I first visited Houang’s in 2003, but it is obvious that this strip shopping center had been in bad decline before the influx of Asian restaurants and shops. The video stores in the shopping center sell Thai and Lao music, and other restaurants offer Thai and Vietnamese food.

Ly’s Cafe has a smaller Lao menu than Houang’s, its predecessor, but quite a few Thai dishes have been added. Lao and Thai food have different flavors, but Lao restaurants seem to be able to prepare Thai food very well, so I am sure that would be a good choice at Ly’s. I usually find Chinese food at Lao or Thai restaurants to be mostly an accommodation to Americans or people who cannot eat the spicy food from Southeast Asia, but I cannot apply this statement to Ly’s until I try some of its Chinese dishes. Since Chinese food is available almost everywhere, and Lao food is quite hard to find, I will probably stick with the Lao food on subsequent visits.

All of the restaurants on this strip of Amarillo Boulevard seem to stay open late, and in the case of Ly’s Cafe I think they close at 10 p.m. There are certainly not enough immigrants from Southeast Asia in Amarillo to keep all these restaurants in business, and I have observed people of many different ethnic groups enjoying the food at the places I have gone. Although I was not able to taste the full range of food served at Ly’s (from non-spicy Chinese food to somewhat spicy Thai noodles to spicy Lao food), I saw enough tables ordering different types of food to know that the owners are used to accommodating people with all kinds of tastes. If you are hesitant to order Lao food because you do not know what it is like, that should not stop you from at least coming to Ly’s and see what they have to offer. The spiciness is prepared to the customer’s taste, and they will not serve spicy food to anyone who does not want it.

Each table at Ly’s has a picture of a different Lao dish, and this should be very helpful in trying to decide what to order if you want to try Lao food. I definitely think it helps to see what you are ordering, and they realize that this type of food is new to many people. Looking at the pictures may not be very effective if all the tables have customers, but they will probably figure out a way to let you see what you want to order. 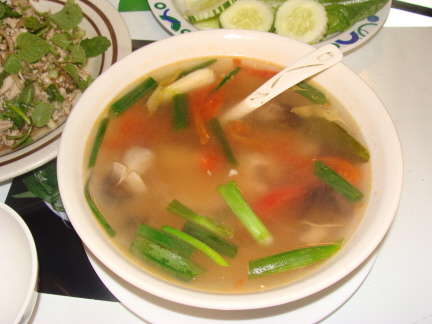 Chicken Soup seems like a good choice to start out a Lao meal, but surprisingly, Ly’s Cafe was the first place I have had chicken soup that I really thought had all the flavors that I could imagine Lao food would offer. This one was made with lemongrass, tomatoes, and other aromatic vegetables. It was not spicy, and I think it is one of the foods Lao people eat when they have had enough spicy food. The flavors, though, were pure Southeast Asian. 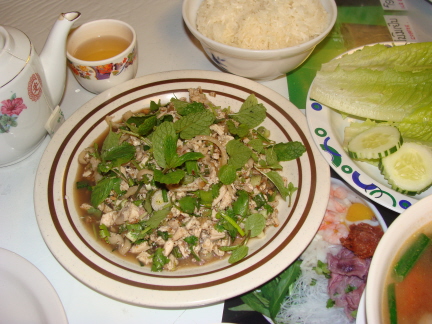 Chicken Lap (pronounced with a long “a” as in “laap”) is a traditional Lao dish that is also found in many Thai restaurants. In the case of Ly’s I know this is a Lao dish because it is listed on the Lao menu, and also because I asked. Lao dishes tend to be more salty than sweet, and this one had the distinguishing flavors I have found previously with lap. Mint, lime, and spices add a sharp taste to the ground meat, so that this is not a taste I think most people will have to acquire, but one which they will thoroughly enjoy (at least when this dish is prepared correctly). Cucumbers and lettuce are served on the side, and are a big part of the flavor mix of this dish, so I would say if you do not like lettuce or cucumbers it would probably be best to try something else.

In my past experience, restaurants have not been as successful in preparing chicken lap as the beef version, so I was very pleased with the result at Ly’s. The meat was well cooked, and was good quality, but cut into very small pieces. I usually think of ground meat as inferior, but this was more like small chunks without the fat or grease sometimes associated with ground meat. I think the small pieces gave the meat more of a chance to absorb the flavors of the sauce and spices, so this was a good thing.

Unless you are sure you want the lap spicy, they serve it mild, and let you add your own chile. I used some fish sauce with chiles to give it the flavor I had experienced with other versions, and it was not only good, but possibly the best lap I have ever had. I was a little bit disturbed that I was not offered the fish sauce until I specifically asked for it, not because it was a problem for me, but because others eating Lao food for the first time may not know to ask for it. Still, I thought the lap was so good I think others will enjoy it even if they get the default mild version (and other chiles are available on the table to make it spicy).

An order of Sticky Rice is traditional with this dish, but I thought the rice was too dry and was not good for dipping into the sauce as I understand is the custom with Lao food. With everything else being so good, this was the one down point to the meal.

Drinks
Several kinds of Thai tea and iced drinks are available. Even though Lao food tends to not contain sugar, the same is not true with the drinks. I tried the hot jasmine tea, though, with my meal.

Final Thoughts
One of the big advantages of Ly’s Cafe over other restaurants that serve Lao food is that there is no smoking, while other places have separate dining areas for smokers and non-smokers. I prefer an atmosphere in which smoke will not be coming from tables in another section of the building, so to me Ly’s offers the best chance to enjoy the meal.

Although Ly’s Cafe lists “Thai” cuisine first on its sign, it is the only restaurant I have found in Amarillo that I could say is primarily a Lao restaurant (although other places serve Lao food). The only difference this really makes is in the choices of dishes that are offered, and judging more from the pictures of items on the tables than the actual menu, I do believe Ly’s has a good choice of Lao food. I certainly know that I was not disappointed with the meal I had.