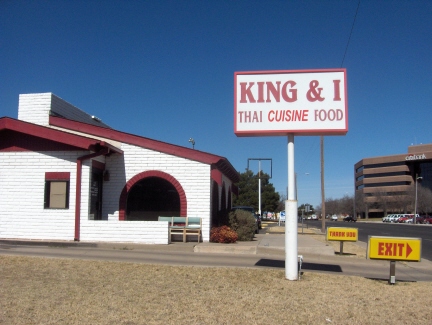 King and I in Midland

This Thai restaurant near downtown Midland may seem out of place in the land of steaks and barbecue, but the large number of patrons who frequent King and I testify that there is a hunger for Asian food in West Texas that goes beyond the typical Chinese buffet.

King and I Thai Cuisine was recommended by a West Texan I met through my webpage, and I can well understand why this restaurant would command a strong loyalty from its fans. I sensed the same kind of loyalty from the customers who were there, many of whom seemed to be regular visitors and knew exactly what they wanted to order upon being seated.

King and I occupies a small building that looks like a converted fast food restaurant, and it was completely full at lunch time with cars lined up at the take-out window outside. The tables were close together but not cramped. It was not what I would call an upscale restaurant, but ads were placed on the tables indicating that a rather elaborate dinner would be available as a special on Valentine’s Day. I suspect that if guys wanted to wear jeans to the special dinner it would be just fine.

The good thing about having a lot of regular customers is that they seemed to come in and out fairly quickly, opening up tables at a rapid rate. The service was prompt and the waitresses were willing to make suggestions for those who were not already familiar with the food.The waitress I talked to seemed quite knowledgeable, and not only told me what was popular, but also what she considered to be representative of typical Thai food.

Thai Tea
I started out ordering Thai Tea, a creamy blend of tea that is served in almost all Thai restaurants, but not all are as good as at King and I. The glass was filled with enough ice to keep the tea cold, and the ingredients were in the correct proportions so that it did not end up with anything floating on top or settling to the bottom. My only complaint was that I wish there had been more of the tea once I started eating some extremely hot chiles with the meal, but the serving was actually the same size I normally find at Thai restaurants.

Main Dishes
The next step was to choose from among the varied types of food that were available, from salads to curries to noodles. Some lunch specials were being served but since I recognized most of the items on the regular menu as being the dishes I find at most of the better Thai restaurants, I wanted to get one of these. 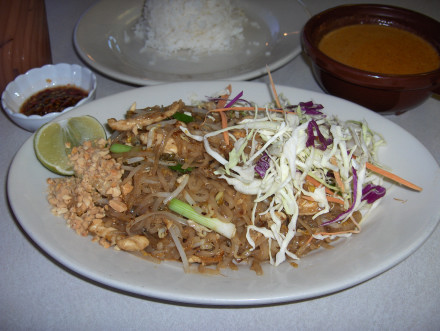 The waitress recommended the Pad Thai as being one of the better noodle dishes, and one that she liked. My insider information had also recommended the pad thai, so this was enough to overcome my normal reluctance to order a dish that is many times modified for American tastes in too many of the Thai restaurants I have visited. This was a grayish-brown version that might have been as bland as many others I have tried, but turned out to have the full rich flavors of the spices Thais use to make their noodle dishes interesting. It had a “sweet spot” on top where sugar had been added, and a lime was supplied for a citrus flavor. I ordered the one with chicken, and it was of good quality. It came with cabbage on the side, something that I am pretty sure is a Thai tradition rather than being based on popular request by American customers (I happened to like the cabbage). 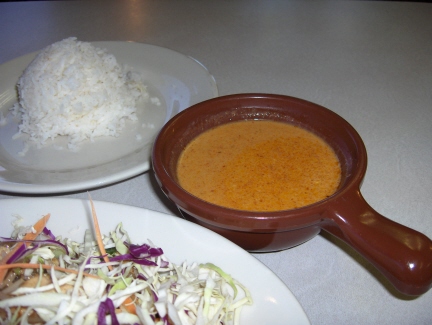 In an effort to get a more complete sample of the restaurant’s food, I ordered a small bowl of Panang Curry with white rice. In terms of quantity the pad thai would have been plenty, but I am glad I got the extra flavor of this side dish. First, I was quite impressed that they were even willing to serve me a small portion of curry without charging a price that would have been close to ordering a second meal. Additionally, I was impressed with the curry itself. It was thin and runny (my only complaint), but the flavor was rich and smooth. I am not prone to heartburn, but this seemed to be the type of curry that would not bother people with sensitive stomachs. Many of the rather bad curries I have experienced have been in various cities throughout Texas, and I was surprised to find such a good one in the rather small city of Midland.

Overall Impressions
The Thai chiles I got as a condiment for the pad thai were serious in terms of both heat and flavor. The curry was only medium hot, and the pad thai itself was quite mild without the chiles being added. I know eating Thai food in West Texas is not the same as being in Bangkok, and I believe the restaurant has made an accommodation by making the food less spicy than is normally found in Thai restaurants. After I got the extra condiments, though, I was quite happy with the result. I believe if I were to order a curry dish I would ask them to make it more spicy, though.

I was impressed by what is on the menu, and I believe there are many good things to try here.